This paper aims to overcome two major defects with the traditional rock image classification framework based on convolutional neural network (CNN), namely, slow training and poor classification accuracy. First, the causes of the two defects were analyzed in details. Through the analysis, the slow training is attributable to the information redundancy in the original image, and the classification error to the lack of differentiation of rock features extracted from the spatial domain. Therefore, the original image was divided into multiple blocks of equal size, and the discrete cosine transform (DCT) was introduced to process each block. After the transform, ten or fifteen frequency coefficients in the upper left corner of the 2D frequency coefficient matrix were retained, and added to the traditional CNN framework for image classification. Experimental results show that the proposed DCT-CNN framework outperformed the CNN framework in training time and classification accuracy.

Rock is a very complex porous medium. It is very difficult yet meaningful to analyze the structural features of rock. If extracted and recognized effectively, the rock features will enable scholars and engineers to better study, explore and develop mineral resources. The classification of rock images is an important prerequisite for recognition of rock features. 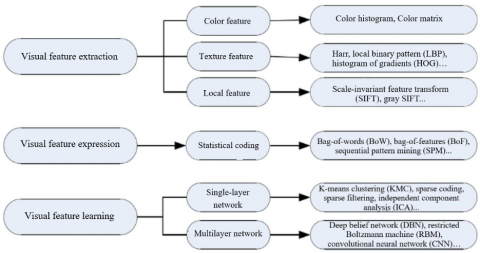 In contrast to the single-layer network, deep learning requires a multilayer network structure [12,13]. The most popular deep learning frameworks are based on restricted Boltzmann machine (RBM0, deep belief network (DBN) and convolutional neural network (CNN). Singh et al. [14] constructed a deep learning network to process and analyze basalt images, and successfully recognized the texture features of minerals in basalt. Zhang et al. [15] proposed a method to segment and quantify the computed tomography (CT) scan images of rocks based on deep learning. Li et al. [16] trained micro-images of sandstone through deep learning, and obtained an accurate classification model for these micro-images.

In a convolutional layer (feature extraction layer), each plane is connected to one or more feature maps of the previous layer. The connection(s) is/are associated with a kernel or mask, i.e. a 2D matrix of adjustable entries called weights. Each plane calculates the convolution between its 2D input and its kernel for the first time. The convolution outputs are summed up and then added to the adjustable scalar. Finally, the activation function is applied to process the result to obtain the plane output, which is a 2D matrix called feature mapping.

Each sampling layer (feature mapping layer) has the same number of planes as the previous convolutional layer. The sampling plane divides its 2D input into non-overlapping blocks. For each block, the total value of four pixels is calculated, multiplied by an adjustable weight, and then added with a bias. Finally, the activation function is called to generate the result: an output of 2×2 blocks. Obviously, each sampling plane halves its input size along each dimension. The weights of neurons are the same in the plane of the feature mapping layer, and the feature map in the sampling layer is connected to one or more planes in the next convolutional layer.

An output layer is usually set up based on a sigmoid function or radial basis function (RBF). Here, the former is selected to build up the output layer. The outputs of this type of layers are considered the output of the entire CNN. In visual pattern classification, these outputs indicate the class of the input image.

The convolution and sampling process of the CNN is explained in Figure 3. It can be seen that the convolution process is to input the filter $f_{x}$, add a bias $b_{x}$ to the filtered result, and compute the convolution result $c_{x}$ by sigmoid function. The sampling process is to combine the adjacent four pixel values into a single value based on $b_{x}$, and apply weight $w_{x+1}$ and bias $b_{x+1}$ to the value. The sampling result $S_{x+1}$ is obtained by sigmoid function. 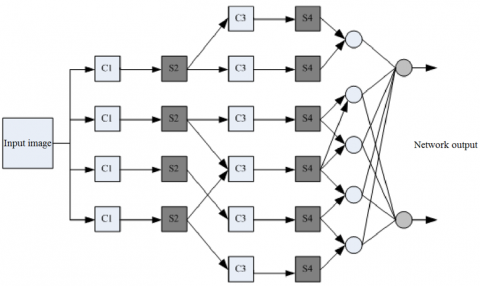 Figure 2. Structure of a typical CNN

Figure 3. Convolution and sampling of the CNN 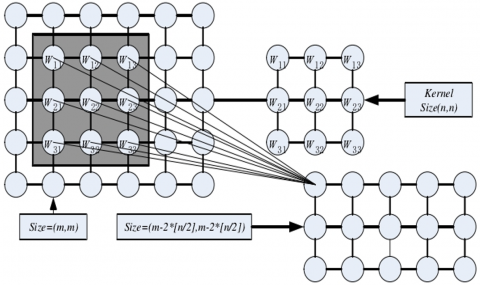 Figure 5. The operation of the convolutional layer

The sigmoid function, a common activation function of artificial neural networks (ANNs), can be expressed as:

where, $\alpha$ is the slope of the function. Different activation functions have different slopes.

The operation of the convolutional layer can be summed as follows: First, the feature map from the previous layer is convoluted by the kernel, and the result is processed by the sigmoid function, creating the final feature map. The convolution formula can be expressed as:

where, $n$ is the number of network layers; k is kernel; bn  is the bias of each layer.

As shown in Figure 5, the operation of the convolutional layer is essentially to obtain neuron $x^{nj}$ of this layer using the kernel near neuron $x^{n-1}$ of the former layer, i.e. derive the feature map of this layer from that of the upper layer.

As shown in Figure 6, the operation of the sampling layer is to merge the adjacent pixels. The merging of neuron x can be described as:

where, m is the size of the sampling window.

The DCT was introduced to shorten the training time and enhance the accuracy of the CNN in classification of rock images. The DCT, the real part of Fourier transform, approximates an image with a set of cosine functions (basis functions), which differ in frequency and amplitude [17]. Therefore, the DCT can be regarded as a simplified Fourier transform.

The DCT is an orthogonal transform, capable of transforming an image from spatial domain to frequency domain. It can simplify the convolution operation, because the image is difficult to process in the spatial domain. Through the transform, the computing load is reduced and the processing speed is improved.

Through the DCT, a 2D frequency coefficient matrix can be obtained with the same size as the input image. In the matrix, the input image is represented as the linear weighted sum of a series of basis functions, which correspond to the components of the input data with different frequencies.

For an $8 \times 8$ 2D frequency coefficient matrix (Figure 6), there are 64 basis functions, which continuously increase in frequency in both horizontal and vertical directions. Therefore, after DCT transform, the lower right corner of the image is the high-frequency part, while the upper left corner is the low-frequency part. 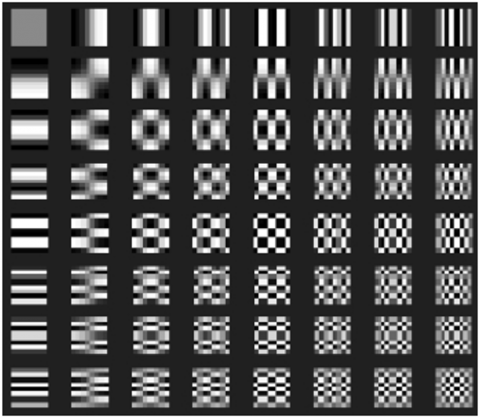 3. Rock Image Classification Framework Based on CNN and DCT

Compared with the original image, the low-frequency coefficients of the 1D vector helps the CNN to learn better high-level features in the frequency domain, laying a good basis for accurate classification. In this way, the redundancy of image information is reduced, and the DCT-CNN classification framework for rock images becomes more efficient. 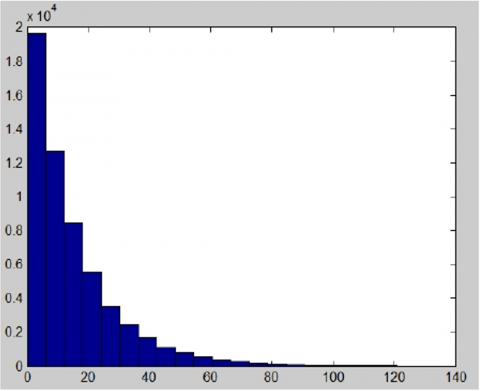 Figure 8. Histogram of neighborhood pixel difference in horizontal direction of a rock image 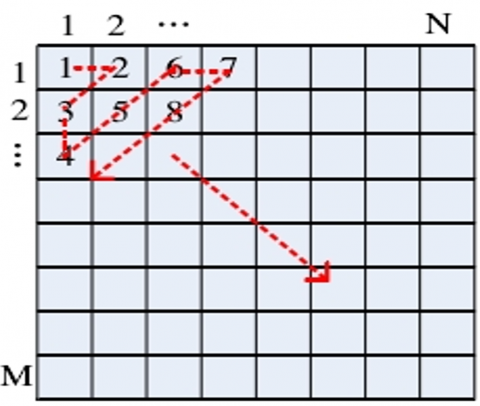 Figure 9. The zig-zag scan of the 2D frequency coefficient matrix 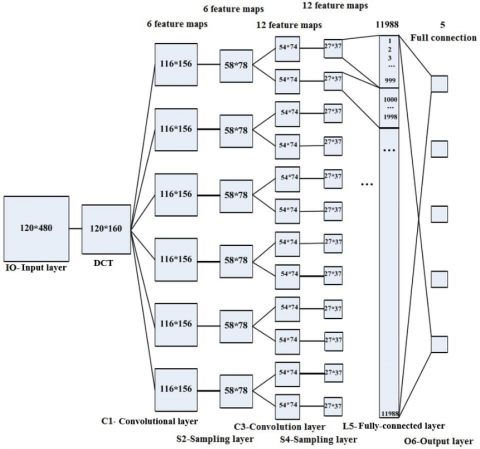 Figure 10. The structure of DCT-CNN classification framework for rock images

Figure 10 presents the structure of the DCT-CNN classification framework for rock images. The framework can be established and trained in the following steps.

Step 1. Load a 120×480 training image into the input layer, and remove the hue and saturation information, leaving the image brightness only, that is, convert the RGB image into a grayscale image. Then, convert the grayscale image into a binary image, and decompose it into twenty 6×8 blocks. Perform DCT on each block and retain only the few frequency coefficients in the upper left corner in the 2D frequency coefficient matrix. The complete image after the DCT of each block is $120 \times 160$ in size.

Step 2. Forward the frequency coefficients to the first convolutional layer C1, which consists of six 5×5 neurons, a step size of 5, and a random kernel $\in[-1,1]$. The original image is convoluted from left to right and from top to bottom, a bias b (set to 0) is added to the convolution result, and six 116×156 feature maps are generated by sigmoid function. Each feature map contains the feature information of the original image.

Step 3. The nonoverlapping 2×2 sub-blocks in layer C1 are aggregated by a 2×2 filter, multiplied by a random weight w $\in[-1,1]$, added a bias b (set to 0), and six feature maps of sampling layer S2 are generated by sigmoid function. Each map is half the size of that of layer C1.

Step 4. Forward the feature maps to convolutional layer C3, which consists of six 5×5 neurons, a step size of 5, and a random kernel $\in[-1,1]$. Each feature map is convoluted from left to right and from top to bottom, a bias b (set to 0) is added to the convolution result, and twelve 2 54×74 feature maps are generated by sigmoid function.

Step 6. Arrange the pixels of each of the 12 features of layer S4 from left to right and from top to bottom, and arrange 12-column pixels of the 12 maps in the order of the map. In this way, generate the fully-connected layer L5 containing 11,988 neurons. Each neuron corresponds to a pixel.

The first step is equivalent to preprocessing the rock images by the DCT. Thus, the input layer and the DCT are the preprocessing module of the framework. Steps 2~5 are about feature extraction. Thus, layers C1~S4 constitute the feature extraction module. Steps 6 and 7 mainly classify the rock images, indicating that layers L5~O6 form the classification module. Through the seven steps, the working signals is propagated forward, completing the initialization and pretraining of the framework.

Table 1 shows the test results of our framework with 10 frequency coefficients. It can be seen that our framework reduced the average error of CNN rock image classification framework by 4%.

Table 1. The test results of our framework with 10 frequency coefficients

Table 2 provides the test results of our framework with 15 frequency coefficients. It can be seen that our framework reduced the average error of CNN rock image classification framework by 1.85% on the original image.

Table 2. The test results of our framework with 15 frequency coefficients

As shown in Table 2, the error after brightness adjustment or geometric transform of the test image was almost equal to that for the original image.

However, the average error of our framework changed marked after the Gaussian noise or salt-and-pepper noise was added to the original image. The error change is positively correlated with the intensity of the additive noise. This is because the image has a poor quality if the noise is intense, and the extracted features are quite ineffective. However, the error change is much smaller than that of CNN rock image classification framework, under the same conditions.