In recent years, biological features have been widely used in Internet financial payment. Although the technical requirements for secure payment are met, the authentication standards and consistency requirements for user identity in payment have not been fulfilled. Wang et al. [21] presented an anonymous authentication and management process of mobile payment, which supports secure transactions, prevents user information leakage, and reduces identity theft. The proposed management process integrates various things, including the generation, encryption, and decryption of transaction keys, and processes the users’ personal information and biological features based on mobile devices for identity authentication. Chen and Roscoe [22] demonstrated how the human interaction security protocol supports the authentication of different types of identity, when the Public Key Infrastructure (PKI) is unsuitable, misunderstood, or too costly, and highlighted the payment situation. Majumder et al. [23] recognized the leapfrog development of mobile computing, and emphasized that the near-field communication (NFC) function, which is embed into smartphones by Google, Samsung, and Apple, has provide mobile payment functions and eliminate the demand for payment cards. However, the technology is not suitable for everyone, owing to limitations of interoperability and cost. Jin et al. [24] explored the authentication of collective payment of debit cards, and put forward two cardholder identity authentication protocols. The first protocol processes the personal identity number (PIN) in the secure electronic transaction (SET) protocol, exerting the minimum influence. The second protocol checks the balance based on the server wallet mode. The two protocols apply to different environments, and meet the needs of collective payment of debit cards. Bascuñana et al. [25] developed an open, cross-domain, and platform neutral system to illustrate the services of different devices and applications. The developed technology can save the cost and time of starting new devices and applications. The store architecture is based on advanced communication networks and network technology.

Table 1 lists the hidden dangers of Internet financial payment and their probabilities.

In the context of consumer identity detection, the security supervision of Internet financial payment mainly detects biological features like fingerprints, faces, palm prints, and auricles. This paper relies on the active shape model to extract these features from images. The active shape model is displayed in Figure 3. 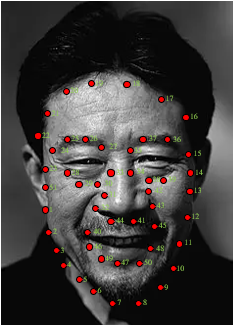 With superior speed in image processing, the active shape model is suitable for identity detection and authentication tasks that require good real-time performance. Before building a shape model for extracting consumers’ biological features, it is necessary to construct the shape vector, which is composed of the coordinates of all feature points in the original image. Let l be the number of feature points; i be the serial number of each sample image. Then, the shape vector of the sample image can be expressed as:

To obtain the feature point of image sample a, the first step is to compute the distance Sij from the feature point of the current sample to that of another sample. Suppose there are a total of M samples, and the mean of a satisfies a-=(1/M)∑mi=1ai. Then, the variance R of sample a can be calculated based on Sij:

The sample images are different in size. The size difference may lead to variations in feature point coordinates and image orientation, which in turn influence the extracted features. To prevent the influence, this paper carries out Procrustes normalization on the shape vector of every sample image through rotation, scaling, and translation. Let r be the scale of transform; ω be the rotation angle. Then, the geometric transform can be expressed as:

Firstly, the shape vector of the target is normalized to the unit size:

The mean of each local grayscale model in the sample image can be calculated by:

The covariance matrix of the model for each feature point can be calculated by:

During model matching, the parameters are adjusted to obtain the new position of each target feature point. The similarity between old and new features is measured by the Mahalanobis distance. The new local features can be expressed as:

For the biological features of consumers, the shape vectors of the images of fingerprints, faces, palm prints, and auricles normally overlap each other, which complicates the feature extraction. This paper reduces the dimensionality of the shape vectors with overlapping sample images through principal component analysis (PCA), and builds up a statistical shape model. This approach is simple, and able to suppress the influence of feature point shift.

Before building the statistical shape model for the shape vectors with overlapping sample images, it is important to carry out dimensionality reduction. The mean shape vector of targets in the sample image can be calculated by:

The mean shape vector obtained by formula (11) is subtracted from the aligned target shape vector:

The covariance matrix R is calculated for the target shape vector:

The first ε eigenvectors of R solved by the above computing is denoted as T. Each eigenvector corresponds to an eigenvalue T=(t1,t2,t3,...,tε). The eigenvalue that affects the change direction of the target model can be recorded as y. Finally, the target shape vector of any sample image can be generated based on the mean target shape, and the shape change parameters of targets:

To minimize the gap between the biological feature points in consumers’ identity detection and the actual feature points, the agreement between each model and the actual target contour is continuously improved by affine transform and eigenvalue y adjustment, after obtaining the active shape model of the image target.

The preceding section relies on the active shape model to extract the feature points of consumers’ biological features, such as fingerprints, faces, palm prints, and auricles. This section intends to detail the feature matching and fusion of the images on consumers’ fingerprints, faces, palm prints, and auricles. The fusion process of the multiple biological features is illustrated in Figure 4.

The combination in formula (17) is not a mathematical AND operation, but a connection between arrays. The length of U is equal to the sum of the length of MR and that of FP.

The fusion of the four types of eigenvectors can be expressed as:

Figure 4. Flow of the fusion of the multiple biological features 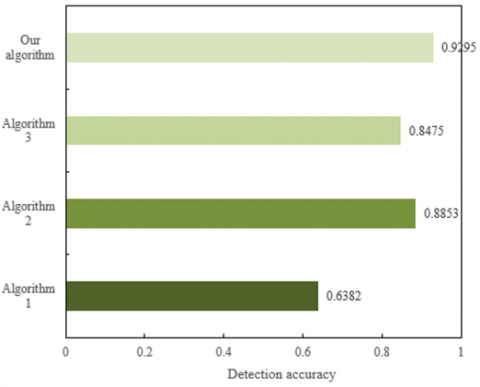 Figure 5 compares the feature detection accuracies of different algorithms, including our algorithm, PCA algorithm, local binary pattern (LBP) algorithm, and latent Dirichlet allocation (LDA) algorithm. It can be clearly observed that our biological feature extraction approach, which is based on active shape model, achieved the highest accuracy (92.95%) on the fingerprint, face, palm print, and auricle features. The feature detection accuracies of PCA (Algorithm 1), LBP (Algorithm 2), and LDA (Algorithm 3) were 84.75%, 88.53%, and 63.82%, respectively.

The time efficiency is very important to the identity detection and authentication of consumers based on the fusion of multiple biological features. Table 1 shows the training durations of different algorithms measured through experiments. The time efficiency was measured by the mean duration for five runs of each program. It can be seen that our method consumed the fewest time in training, while the LDA was the most time-consuming algorithm. 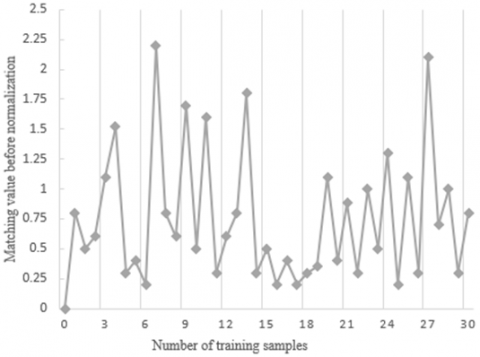 Figure 6. Biological feature matching values before and after normalization 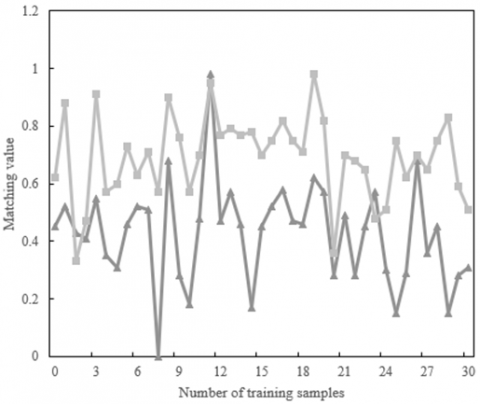 In addition, the feature images of fingerprints, faces, palm prints, and auricles were tested to compute the accuracies of identity detection. Table 2 summarizes the detection accuracies of multi-biological feature fusion with different weights. It can be seen that the identity detection using a single type of feature images was below 80%. The highest accuracy was achieved (96.02%), when the different types of feature images were assigned weights of 0.2, 0.5, 0.2, and 0.1, respectively. Figure 7 shows the variation of biological feature matching value with weights.

The experimental results show that the weight combination of 0.2, 0.5, 0.2, and 0.1 led to a higher matching value than that of 0.1, 0.3, 0.2, and 0.4. Therefore, the proposed fusion method for multiple biological features can significantly avoid the incorrect identity detection through nonlinear programming with the optimal weight assignment. The real-time performance and applicability of our approach are satisfactory in Internet financial payment.