Brain trauma, stroke, and cerebral palsy are the main causes of upper limb dysfunction, which brings huge pain and burden to patients and their relatives [1-6]. Upper limb movement is closely related to daily life. One of the important research directions of upper limb rehabilitation is whether patients with upper limb dysfunction can gradually regain normal upper limb motor function through rehabilitation training [7-12]. To a certain extent, the internal activity and state of muscles can be reflected by the surface electromyographic (sEMG) signal, a bioelectrical signal transmitted between surface muscles and the surrounding neurons [13-17]. Meanwhile, the inertial information of muscle movement is contained in the acceleration signal. These two types of physiological signals are closely associated with the rehabilitation of patients with limb dysfunction. The joint analysis of these two key physiological signals enables the scientific and effective evaluation of upper limb rehabilitation [18-21].

The motion capture system is considered an increasingly interesting tool for rehabilitation evaluation. Focusing on the evaluation of injured shoulder rehabilitation, Vitali et al. [22] combined the low-cost Mocap system with video processing technology to quantify the outreach. Their approach overcomes the difficulty in capturing the extremely complex shoulder actions. Guo et al. [23] proposes a collection method for sEMG signal and interactive force signal in the rehabilitation training process. The signals were collected by driving specific actions with external forces. In addition, Guo fitted a fuzzy neural network, and verified its prediction ability during rehabilitation training. Pundik et al. [24] analyzed and studied the response of traumatic brain injury (TBI) patients to a new therapy with an electromyogram orthosis. Their study includes baseline data collection / equipment manufacturing (5 weeks), clinical training (9 weeks), and family utilization (9 weeks). During the experiments, the orthosis was introduced to the treatment based on exercise learning. The experimental results demonstrate that the patients saw improvements in action range, tension, muscle strength, Fugl-Meyer, square test result, and the Chedoke evaluation score during clinical training. Rehabilitation training with upper limb exoskeleton robots has been proven to be a scientific and effective strategy. Based on surface electromyography, heart rate variability, and the integrated instantaneous heart rate, Wang et al. [25] put forward a fatigue judgement method fusing multiple information, developed a bioelectrical signal collection system for upper limb exoskeleton robots, and completed the acquisition and processing of both EMG signal and electrocardiosignal. Guo et al. [26] adopted a depth model to process the original surface electromyographic signal, examined the feasibility of the recognition of upper limb motion intentions and the real-time control of the auxiliary equipment for upper limb rehabilitation training. On this basis, they designed a lightweight convolutional neural network (CNN) and support vector machine (SVM) for EMG signal identification, and compared the offline and online performance of the two models.

The mathematical statistical method was adopted to process the time variation of the waveforms of the collected sEMG signal and acceleration signal. The acquired parameter features of the signals are the time-domain features of upper limb actions. Let am={a1,a2,...,aM} be the time series of physiological signal samples collected from a segment, with M being the signal length. The degree of oscillation of the collected physiological signals was characterized by the number NZERO of zero points being passed, i.e., the number of times that the acquired signal curve passes through the time axis:

Then, the mean absolute value of the physiological signal samples from a segment:

The root mean square (RMS) can be calculated by:

The EMG signal is the superposition between the action potentials of the motor units in various muscle fibers. The level of the action potentials can be characterized by Wilson amplitude, i.e., the number of amplitude differences between two adjacent sample points being greater than the preset threshold FZ. This parameter was introduced to characterize the contraction degree of upper limb muscles:

This paper selects db6 wavelet to perform three-layer wavelet decomposition of the collected physiological signals. The TFCj of each layer was solved, and taken as the time-frequency feature of that layer for analysis.

Approximate entropy, permutation entropy, fuzzy entropy, and sample entropy, as measures of the orderliness of the target system, are widely adopted to analyze physiological signals like EMG signal and electroencephalogram (EEG) signal. The fuzzy entropy FE can measure the fuzziness of the fuzzy domain. Let n be the dimensionality of the collected physiological signals; jSEMij be the similarity between two samples; s be the mean similarity of SEMij. Then, FE can be calculated by:

Step 1. Construct a n-dimensional vector of the collected physiological signals in turn:

Step 2. Define the distance between vectors An(i) and An(j) as the largest difference between the corresponding elements:

Step 3. Count the number Xni(s) of u[An(i),An(j)] smaller than the mean similarity s, and compute the ratio Yni(s) of Xni(s) to the total number of distances M-n+1:

Step 5. Construct a n+1-dimensional vector of the collected physiological signals in turn, and repeat Steps 1-4 to obtain Yn+1(s).

Step 7. Due to the limited length of the collected physiological signals, denote the natural logarithm as ln, and estimate the sample entropy of the series of M samples, before applying the method to upper limb action identification:

Any of the above entropy metrics, whether approximate entropy, permutation entropy, fuzzy entropy, or sample entropy, can quantify the regularity and complexity of signal time series. In real-world limb rehabilitation training, however, the physiological signal time series generated by the complex physiological system are extremely complex in time and space dimensions. The upper limb actions may be recognized insufficiently with only one metric. Hence, this paper adopts multiscale entropy to identify the upper limb actions in limb rehabilitation training.

Multiscale entropy is essentially derived from the sample entropies of signal time series on different scales. The derivation process is relatively simple. But multiscale entropy does not apply to the analysis of non-stationary nonlinear signals, and could not reflect the low-frequency components in the collected physiological signals. Therefore, empirical modal decomposition (EMD) was carried out to extract the sample entropy features of the collected physiological signals. Specifically, EMD was implemented to extract the intrinsic mode functions (IMFs) from the signal time series. Then, the sample entropy was calculated from the cumulative sum of the IMFs, and taken as the feature of the signal time series. This strategy fully retains the rich information in the various frequency components of the signal time series, and remains robust to the variation in low-frequency components, providing an efficient feature for identifying upper limb actions. The EMD process is as follows:

Step 6. Subtract the extracted IMF component from a(p). Repeat Steps 1-5 to obtain the next IMF, until all IMFs are obtained. Define the remaining monotonic function with no extreme as the residual CA. Let C be the number of IMFs Ω. Then, the final decomposition of the EMD can be expressed as:

The EMD-based sample entropy feature can be derived from the cumulative sum of the IMFs obtained through the EMD. Starting from the first IMF, the smallest scale, to the end of the complete physiological signals, the total cumulative number QSk(t) of IMFs can be expressed as:

Taking residual CA as the C+1-th IMF, QSC+1 corresponds to the original signal time series a(p). The sample entropy feature based on the EMD can be calculated by: 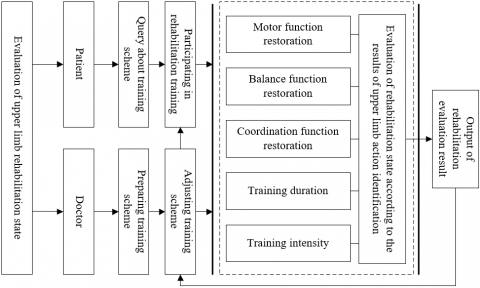 The muscle tension of the patient was measured by the ratio of the RMS of measured EMG VROOT-MEA to the maximum RMS VROOT-max:

The greater the VROOT-MEA, the poorer the muscle function, the higher the degree of spasm, and the less optimistic the rehabilitation. The range of motion for upper limb joints was measured by the ratio of the maximum angle of upper limb movement ANGMEA to the reference maximum angle ANGmax:

The evaluation vectors for muscle strength, muscle tension, and the range of motion of joints are denoted as h1, h2, and h3, respectively. Based on the above metrics, the evaluation matrix of the upper limb motor function can be established as:

The evaluation result on the motor function can be vectorized as:

The evaluation result on the balance function can be vectorized as:

The evaluation result on the coordination function can be vectorized as:

The information fusion between sEMG signal and acceleration signal is crucial to the identification of upper limb actions. This paper extracts multiple features from the main feature segments of the upper limb actions of patients. Figure 3 is the scatterplot of the features of the two types of physiological signals. It can be observed that sEMG signal and acceleration signal are not greatly disturbed by external factors, and are highly discriminable. This is because the patient’s action trajectories vary significantly between stages of rehabilitation. Nevertheless, the action features of different patients in different stages may overlap, for different patients have different habits in executing the same actions. It is necessary to assist the action identification with sEMG signal information that accurately mirrors the fine actions of the upper limbs.

The proposed upper limb action identification method, which fuses sEMG signal with acceleration signal, is dominated by sEMG signal. The reason is very simple: the details on hand muscles, wrist muscles, and elbow muscles conveyed by sEMG signal are the key to the successful recognition of upper limb movement.

Feature extraction was performed on the physiological signals from six patients. The extracted features were divided into a training set and a test set. During the experiments, 140 feature samples were extracted randomly each time. 80 samples were allocated for training, and the remaining 60 for testing. Three different models, namely, KNN, ANN, and SVM, were applied separately to identify upper limb actions. The results in Table 2 suggest that the identification accuracy was significantly improved using the fused signal, resulting in an ideal identification effect. For all three classification models, more than 90% of upper limb actions were identified accurately, using the fused features of sEMG signal and acceleration signal. Therefore, the proposed physiological signal feature extraction approach adapts well to different upper limb action identification models. 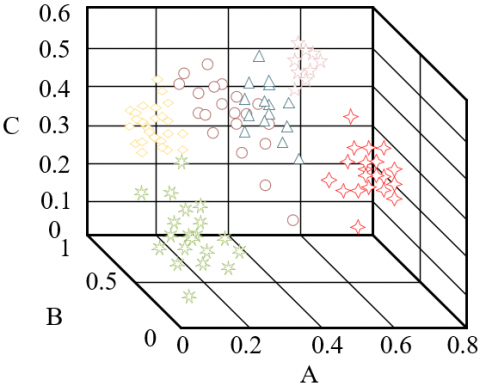 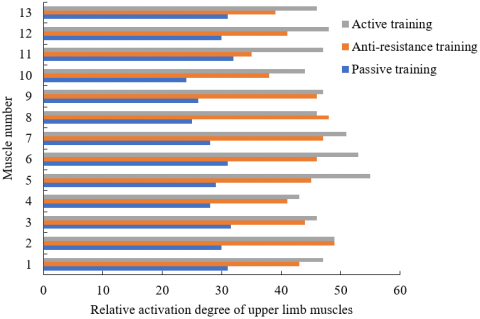 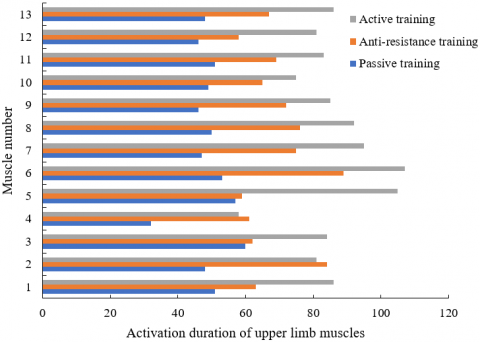 This work was supported by the Project of Changchun Bureau of Science and Technology, Project Name: Rehabilitation massage system based on the output of the standard mechanical evaluation technique (Grant No.: 21ZGM31), and by the project of Jilin Provincial Bureau of Science and Technology (Grant No.: 20200301054RQ). This work was supported by the "Climbing Plan" of Changchun University, relevant technical achievements have been applied for the high-level talent-entrepreneurship team project in Ninghai County, Zhejiang Province.