Improvement of multifaceted system quality requires a group of complex design modifications. An expanding complexity of system is potentially prone to increase in the failure frequency. Continuous and random occurrence of failures in a system could be the main cause for performance drop of machinery. Theoritical probability distribution is one of the techniques used to estimate the lifetime of a system and its sub-systems with several failure considerations. One of the most extensively used statistical approaches for reliability estimation is a Weibull distribution. In the present paper a three-parameter Weibull distribution approach was adopted to analyze the data sets of Load-Haul-Dumper (LHD) in underground mines using ‘Isograph Reliability Workbench 13.0’ software package. The parameters were evaluated using best fit distributions and Weibull likelihood plots. Percentage reliability of each individual subsystem of LHD was estimated. Further, an attempt has been made to identify the preventive maintenance (PM) time intervals for enhancing the expected rate of reliability.

Increase of underground mining activity in India will have obvious positive effects on the demand for mechanized underground mining equipment. Although, the advanced mining technology would find entry into the Indian market, an intermediate level technology comprising LHDs would remain the mainstay of underground coal production, in view of the comparatively smaller size of mines. The average life of LHD could be in between six to ten years [1].

The estimation of equipment life and its possible extension is an important step in the overall decision-making process. Reliability analysis aids in this process to estimate the equipment life. One of the most extensively utilized lifetime distributions for reliability is a Weibull distribution. It is an exceptionally adaptable, suitable distribution for factor estimation and shows the variety sorts of failure rate activities. On the basis of shape parameter, β value, Weibull distribution is a versatile distribution that can take characteristics of other kind of distributions. In a Weibull approximation two or three parameters are utilized for every solution either scale, shape and location parameters. Mixture of strategies is available for assessing the values of these parameters; most of them are analytical and a few are graphical. Graphical strategies incorporate both failure rate (FR) plots and probability density function (PDF) plots. These strategies are not exact but they are moderately quick. The analytical strategies include most extreme probability approaches, the least square strategy and strategy of moments etc. The reliability of a system or sub-system can be estimated using two or three parameter (shape, scale and location) Weibull distributions [2]. Graphical strategies and analytical strategies are very predominant methodologies used for estimating the values of these parameters. Analytical methods like maximum likelihood and least square methods etc., are considered as more accurate strategies. Maximum likelihood method, weighted least, square method and simulation procedures are used to get an exact value [3]. For modeling of best-fit analysis three varieties of  Weibull distribution approaches such as 1-parament  Weibull, 2-parameter Weibull and 3 parameter Weibull distributions are available. The consequent best-fit data is helpful for the maintenance engineers to make a strategic decision on identification of critical component, that is likely lead to machine failure [4]. In this present analysis a 3-parameter Weibull distribution has been considered to estimate the reliability of sub-systems of LHD. 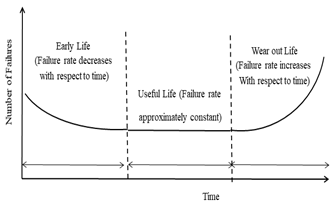 The empirical approximation of 3-parameter weibull distribution has been derived to identify the relations of PDF, CDF, hazard rate or failure rate and reliability. In order to derive these parameters the unreliability factor can be taken as a linear quadratic model shown in equation (2). This may help to identify the co-ordinates of both x and y-axis to plot the Weibull likelyhood plots. A 3-parameter Weibull distribution’s unreliability or cumulative distribution function (CDF) parameter is shown in equation (1).

where, ɳ, β & γ are shape, scale and location parameters. The linear form of equation (1) can be written as

Thus the CDF equation can be written as

This is now a linear equation, with an intercept of βln(ɳ) and a slope of β. Co-ordinates of both x and y-axes of the Weibull probability plotting were derived. The x-axis is simply a logarithmic, since x=ln(t-γ). The y-axis is more complex and represented as

Reliability is defined as the probability of a machine or its components to perform its designated job over an era of time in acknowledged circumstances. A 3-parameter Weibull distribution’s reliability function is given as

The Weibull failure rate function is defined as the quantity of failures per unit time that can be anticipated to happen for the product. It is also known as hazard function, as shown in the equation (4).

The mean time to failure (MTTF) or mean time between failures (MTBF) can be defined as the average life of failure-free operation up to a failure occurrence. The Weibull PDF of MTTF or MTBF is given as

where $\lambda =h(t)$ and λ=failure rate

Present case study has been carried out in one of the underground coal mines of the Singareni Collieries Company Limited located in southern region of India. The colliery is currently being operated in Seam 4 and Seam 6 employing the bord and pillar method. Coal extraction is done by drilling and blasting, and LHD is used as the main work horse for coal handling and transportation. LHDs are used to scoop the extracted coal, load it into the bucket, and dump it in the bottom of mine to undergo primary crushing before being hoisted to the surface out of the mine [7]. Fig. 2 shows a typical LHD vehicle performing a loading operation. 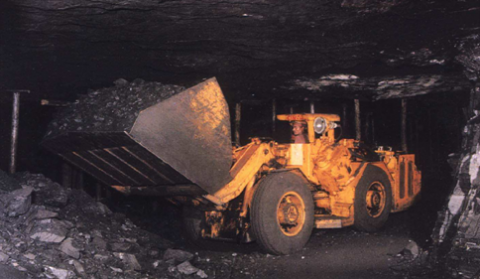 The SCCL operates both underground and open cast mines. 80% of the production comes from opencast mine and 20% is from underground mines. Technology has been a critical factor in the success of SCCL. For open cast mines, it uses technology like shovel dumpers, draglines, in-pit crushing, while for underground mining, it uses technology ranging from (Side-Discharge-Loader) SDLs & LHDs to highly mechanized long wall faces. An increase in productivity and decrease in utilization cost of SCCL can be largely attributed to the phase-wise mechanization and also the adaptation of state-of-the-art technologies.

Before analyzing the machine’s characteristics and failure data, the machine must be classified into a number of systems and subsystems in order to categorize the types of failure occurring on the machine. These classifications will depend up on the maintenance records kept by maintenance personnel, as well as the reasons described by these records, [8]. The classification of subsystems of an LHD are presented in Table 1.

The very first step in reliability analysis is data collection. Complete and accurate data is essential to perform the reliability analysis in an effective manner. The failure and repair data presented in this paper relates to five numbers of LHDs with Emico Elicon make. The data has been collected over a period of one financial year from Apr’ 2013 to Mar’ 2014 by using hand written forms prepared by maintenance personal in the form of maintenance cards, daily reports and computerized recorded maintenance data base. These maintenance records include time to failure, the machine hour meter and the time to repairs of each subsystem etc. The collected data are shown in Table 2.
Table 2. Failure and repair data of various sub-systems of LHDs
4.2 Reliability analysis 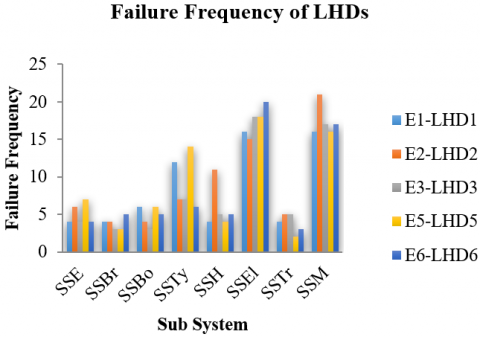 Figure 3. Failure Frequency of LHDs
Reliability is the probability of a machine or its components to perform the specified task with in a given interval of time before going in to failure mode [9].  Sub-systems of the LHD’s are classified into eight numbers of varieties such as Engine (SSE), Braking system (SSBr), Body (SSBo), Tyre (SSTy), Hydraulic system (SSH), Electrical system (SSEl), Transmission system and Mechanical system (SSM) and each sub-system has different frequency of failures. The typical example of frequency of failures of each individual sub-system is shown in Fig.3. Each sub-system can have both repairable and non-repairable components. Repairable components would be repaired at the time of regular scheduled maintenance. Some of the failed components in the sub-systems are not possible to repair  during scheduled maintenance. These are considered as non-repairable components and can be replaced by a new set. These non-repairable  component failures are treated as censored failures and replacement time of these components are treated as censored data [10].
4.3 Estimation of failure rate (FR) and probability density function (PDF)
The failure rate (FR) and probability density function (PDF) values of each individual LHD were calculated on the basis of repair time data. This data includes transportation time for a  failed machine or component from its operating location to workshop, the actual maintenance time and time to restore the repaired component or a machine to its original condition/location. Most of the cases of failed components and their repair can be corrected at the working location itself. The calculated values of FR and PDF are shown in Table 4 and consequent weibull likelyhood plots are illustrated in Fig. 3 to 12.
Table 3. Weibull parameters of LHDs

Table.4. Failure rate (FR) and probability density function (PDF) of LHDs with reference to each sub-system

Weibull distribution parameters were estimated using ‘Isograph Reliability Workbench 13.0’ software tool. The statistical values of reliability, unreliability, failure rate, PDF and CDF have been computed accurately by utilizing failure and repair data of each LHD. The estimated data of Weibull parameters are shown in Table 3.

The percentage of reliability and unreliability of each individual sub-system of LHDs are determined based on 3-parameter weibull probability distribution function using Isograph reliability workbench 13.0 (Table 5). 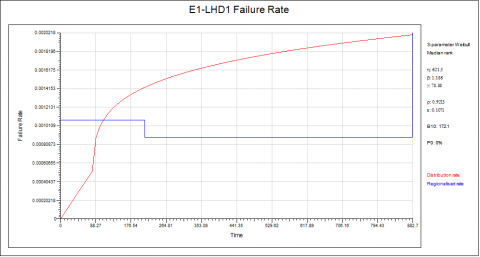 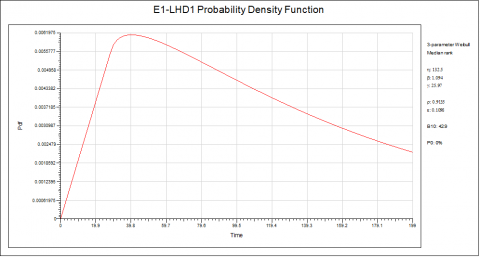 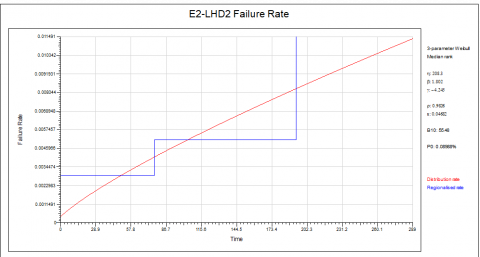 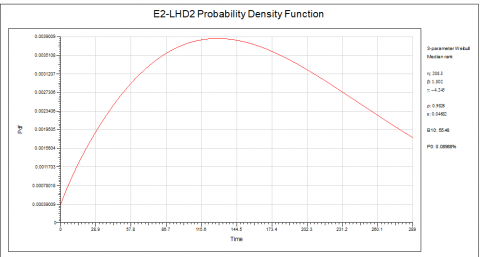 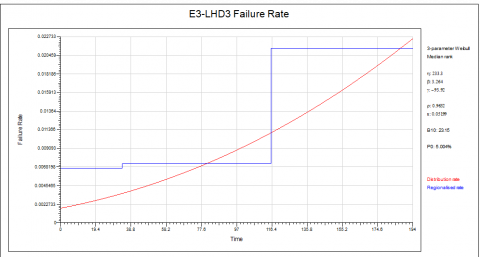 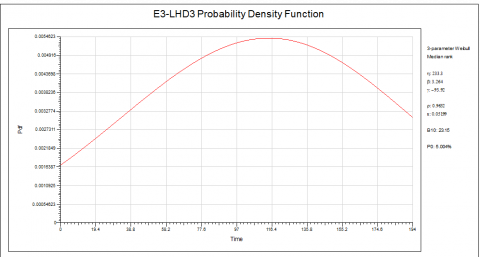 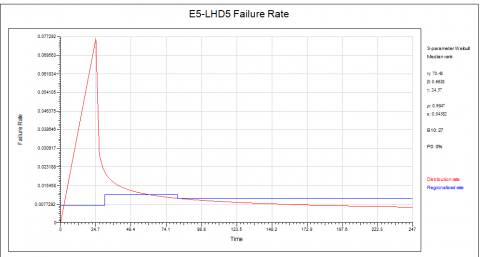 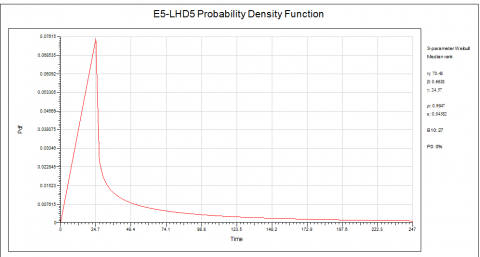 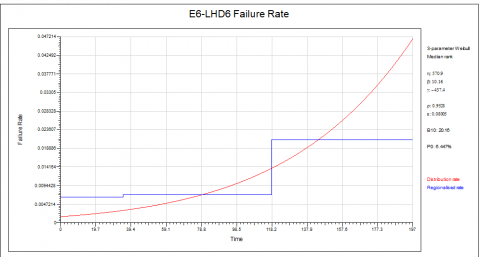 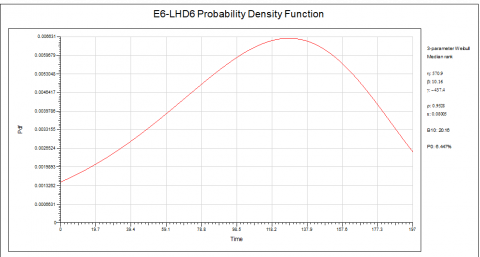 PM is defined as the set of activities performed in an attempt to hold the components as per desired condition [11]. In this paper these intervals were computed with respect to the expected percentage of reliability as show in Table 6. From the calculated quantities it is estimated that if the requirement of reliability is 90% for E1-LHD1, then the PM schedule should be conducted at a frequency of every 38 hours. Similarly, for E2-LHD2, E3-LHD3, E5-LHD5 and E6-LHD6 the durations are 56 hours, 23 hours, 27 hours and 20 hours respectively.

Continuous operation of equipment with a minor failures can only be possible by organizing the proper maintenance planning and implementation. Highest equipment availability and its effective utilization are the two important factors to improve the reliability. Reliability of LHDs was calculated with 3- parameter Weibull distribution analysis. The empirical approximation of this distribution was derived to identify the relations of PDF, CDF, FR and reliability. Weibull distribution parameters such as scale, shape and location parameters were estimated with respect to failure and repair data set. It was observed that the lowest level of reliability was associated with SSEl (8.33%)  and SSM (20.24 %) in most of the LHDs (Table 5). It was concluded that unexpected breakdowns and its consequent idle times of the machine are the major causes for reduction in overall equipment performance. Computation of reliability based PM schedules, aids in designing and implementing a maintenance strategy that would potentially increase/enlarge the expected life of the machine. From the results it was observed that in order to achieve the maximum level of reliability i.e., 90%, effective preventive maintenance is necessary for every 38 hrs for E1-LHD1; for E2-LHD2 this could be 56 hours; E3-LHD3 for this could be 23 hours etc (Table 6). In this study overall equipment performance of the LHDs was not considered and performance evaluation was based only on availability and utilization calculations. Future research should include measurement of key performance indicators (KPI).