The object of this work is bringing out the defects on transparent materials by a without-contact optical method. This method is based on the non-destructive control called the interferometric moiré. The technique offers extremely high performance which gives possibilities to detect micrometric quantity defects of a transparent material. The proposed work is mainly based on the development of an optical setup based on the interferometric moiré method, the control, detection and measurement of microscopic defects.

Defects in transparent materials, accessible to direct observation but not always visible with the naked eye, can be classified into two distinct categories: visible appearance defects and point defects (micro-defects).

The first category corresponds to appearance defects, resulting in a variation in geometric or physical parameters attracts the eye and renders the product unusable; here visual control is possible.

The second category, defects to which we are interest in this work, are the point defects at the microscopic scale such as: Cracks, streaks, stings, impurity…etc, which have adverse effects on the functional quality of the material In order to improve the technological process of manufacture it is necessary to develop control methods capable of highlighting these micro-defects and quantifying them.

The most adapted control methods for these situations are without-destructive and without-contact methods. The moiré method satisfies this condition and solves some of the most difficult problems. Indeed the moiré has a changing effect with the material deformations independently shadow effects.

The Moiré is a purely geometrical[1,2], nonlinear [3] phenomenon obtained by the superposition of two repetitive microscopic structures (two grids) of neighboring spatial frequencies [4-6], which show small deviations either in the structure itself, Or in their positions [7-8].

As part of our work, we have developed an experimental setup based on the interferometric moiré for quality control; detection and measurement of the micro defect on the structure of transparent materials (optical glass) whatever the defect and the test surface size.

The optical setup shown in FIGURE 2 shows the trajectory followed by the laser beam from the source to the projection of the test material image on the observation screen. The HeNe laser beam is enlarged by an optical system. Passing through the linear transmission grating G1, it is diffracted into a set of divergent rays which undergoes the double Fourier transformation by the two lenses L1 and L2 in order to project the image of the grating R1 onto the material to be inspected, This image superimposed on the plane of the second linear transmission grating G2 of the same nature and spatial frequency as grating G1.The second grating G2, is angularly offset in its plane by an angle ($\theta \approx 0^{\circ}$), there is generation of the moiré fringes on the plane of this grating G2, which are projected using a second optical system on the observation plane PO, from which the image of the moiré fringes is captured. 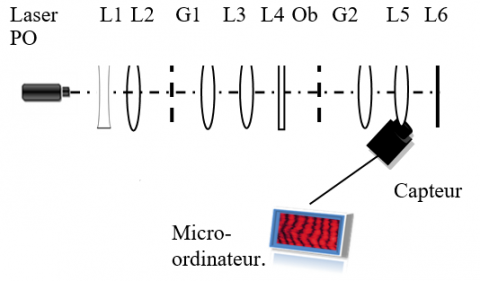 The laser beam passes and palpates optically the transparent material, under inspection, and is impregnated with their geometrical characteristics, and then is projected onto the plane of grating R2 with a magnification of 1/1. The moiré fringes appearing on the plane of the second grating R2 and are projected, using an optical system, on the observation plane with the desired magnification.

If the material palpated optically does not present any defect that is to say a perfect material (insensitivity to defects); the moiré fringes are straight and parallel lines. And if the material has defects, the lines image of the first grating G1 detect these deformations, impregnating their geometries and superimposed onto the plan of the reference grating R2 (second grating G2). Any modification in the geometrical structure of the test grating R1 is materialized is materialized by the deformation in the moiré fringes geometry which provides information about topography of the palpated material

The method proposed here uses an optically setup capable to palpate optically the material to be inspected by projecting the grating image. It allows the observation and the detection in real time of the defects which can be generated either by manufacturing defects or by constraints

Figure 2.  Moiré fringes characterizing the surface of a glass blade

More than the spatial frequency is higher, than the detection resolution is more elevated.

3.2 Detection of the transparent materials defects on a point surfaces 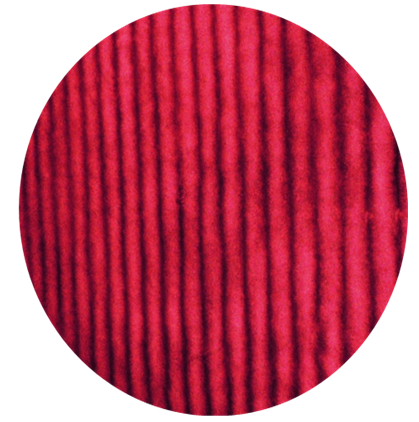 Figure 3. Moiré fringes characterizing the initial state of the glass blade material inspected by the order+1 of the diffraction spectrum 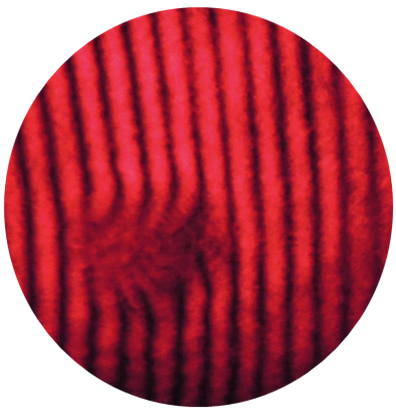 Figure 4. Moiré fringes characterizing the glass blade after creating a defect on its surface inspected by the order +1 of the diffraction spectrum 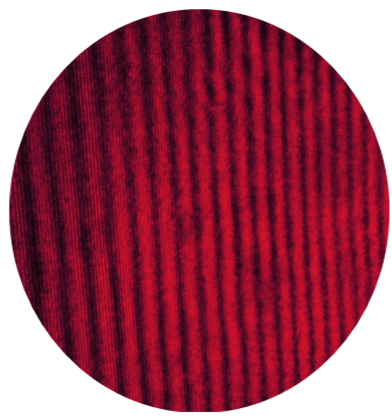 Figure 5. Moiré fringes characterizing the blade of a transparent plastic in its initial state inspected by the +1 order of the diffraction spectrum. 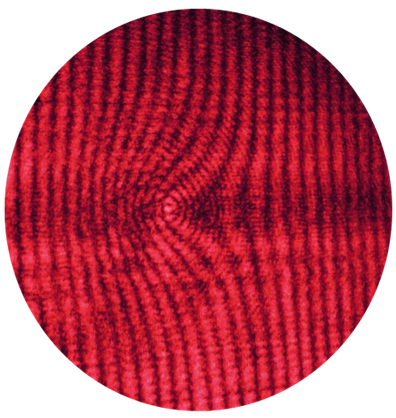 Figure 6. Moiré fringes characterizing a transparent plastic blade after creating a defect on its surface inspected by the order +1 of the diffraction spectrum 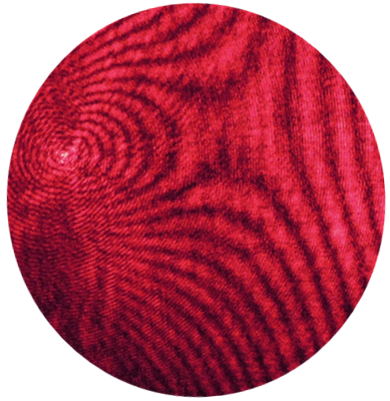 Figure 7. Moiré fringes characterizing a transparent plastic blade after creating a larger defect on its surface inspected by the order +1 of the diffraction spectrum.

This control and measurement method is very promising, in the first, the control speed, and secondly, the measurement precision that it achieves.

It is used for dimensional control, for example to quantify the form error in order to know if a material is Healthy or repairable. Then, it is enough to compare a figure of moire fringes with another previously recorded and obtained from a material considered as a standard, which allows a gain of precision, time, and money.

The detection resolution achieved with this technique is very high because of the sensitivity of the moiré, which makes it possible to have a high measurement accuracy with an uncertainty of measurement which is in the nanometer range, grace to an amplification greater than 1000 X of the movement generated by the moiré, and the magnification produced by the projection system of the assembly.