The field of Genetics has become a branch of extensive research these days. Owing to its application in different fields, especially medical field, this has the scope of becoming a multimillion-dollar industry. This resulted in its success of attracting huge funding from various government and private agencies. The data produced in this research is growing at an exponential rate. High-throughput sequencing techniques like Pyrosequencing, cPAS, BGI/MGI, SOLID sequencing, Nanopore sequencing etc. which parallelize the computation are producing millions of sequences at low cost. This led to the demand for availability of huge storage capacity.

Although the cost of storage is decreasing, optimum usage of storage is always expected. For this, a lot of effort was put forward to compress the biological data that is pouring in at an exponential rate. Algorithms like Gen compress, Bio compress, Cfact etc. are published to compress biological data. However, their compression ratio is not constant. It varies with the input. Our proposed methods exhibit a nearly constant compression ratio. Constant compression ratio helps us in calculating the storage required in advance.

For the first method, CryptoCompress, we use two concepts. One is Cryptographic hash function and the other is Partition theory. Cryptographic hash function which is used in encrypting a message has the property that irrespective of size of the input, the size of the output is always constant. We use this property to achieve a constant compression ratio. MD5 is the function we use in this proposed technique. We use MD5because, it is easily breakable than the other functions like SHA. Partition theory that we see in number theory is used in decompression phase. Partition of a number is the number of ways a number can be expressed as the sum of other numbers. For example,

We get ‘11’partitions like this. However, we are interested in only partitions with distinct parts. In this case, we get only ‘3’partitions. This process of partitioning can be used to reconstruct the original sequence.

For the second method, RefCompress, we use a Reference DNA. This method is suitable for effective compression of human DNA. It can also be used to compress DNA of other species which have, like humans, low intra-species DNA variability.

Behzadi and Le Fessant [1] proposed DNAPack which can detect a better set of repeats than DNAC. Instead of greedy method that is used in DNAC, DNACPack uses dynamic programming to detect better repeats.

Beck and Alderton [2] describes a strategy for generating and DNA sequencing Templates.

Chen et al. [4] proposed GenCompress algorithm which achieves better compression than Biocompress and Cfact by using the measure of “relatedness” to construct evolutionary trees and follows the framework of Lempel-ziv. Hutchison [5] discusses about sequencing methods. Dale and Schantz [6] lists some of the applications of DNA technology. Loewenstern & Yianilos [7] presented CDNA, a statistical based compression algorithm which dependsupon probability distribution of each symbol.

Rivest [15] proposed MD5, a Cryptographic hash function producing 128-bit hash value. Although it is intended to be used in compression, due to its vulnerabilities, it is regarded as unsafe to be used as a security tool. However, its breakable property helps us in using it in the proposed algorithm of this paper.

Grumbach and Tahi [16, 17] proposed two lossless compression algorithms Biocompress and Biocompress2 which uses the idea of Ziv [10]. They use complimentary and exact repeats in the compression process. BioCompress2 improves BioCompress by using Arithmetic encoding to improve the compression. Srinivasa et al. [18] proposes a dynamic programming approach for D NA compression. Human Genome can be downloaded from ref. [19].

In this paper, we propose two algorithms Cryptocompress and RefCompress which achieves, unlike the other algorithms, a constant compression ratio irrespective of the input apart from achieving better compression in some of the cases. We compare Cryptocompress with Cfact, GenCompress and GenCompress2 algorithms. Regarding RefCompress, it is a proposal which was not implemented. However, its theoretical concept gives us the confidence to believe in its proposed ability.

The aim of this paper is to propose Biological sequence, especially DNA sequence compression algorithms that can achieve constant compression ratio irrespective of the size of the input. This constant compression ratio helps us in predicting the amount of space needed to store the sequences. The method we adopted is Experimental in nature. We used standard benchmark sequences used in ref. [9] to apply for CryptoCompress, one of the proposed algorithms. The MD5 algorithm, an essential part in first method comes as a handy tool for our approach. Its vulnerability of being easily broken comes as a boon for our method. The compression ratio that we use to compare the methods is similar to the one defined in ref. [16] ie1-(|O|/2|I|), where ‘O’ is the number of bits in output sequence and ‘I’ is the size of the input. Although many of the proposed compression methods are influenced by Limpel-Ziv algorithms, we get our idea from Cryptography and Partition theory. We use the data in ref. [4] to compare our algorithm with Cfact, GenComporess, GenCompress2 and other algorithms. For the second proposed algorithm, RefCompress, we use Human Reference Genome published in ref. [19]. This algorithm describes the method of compressing Human DNA sequences by comparing the input sequence with the reference sequence. Since it is difficult to get real data about Human DNA, RefCompress is a theoretical proposal which is not implemented.

The rest of the paper is organized as follows. ‘4’ gives the algorithm of CryptoCompress, the first proposed method. ‘5’ explains RefCompress, the second method. In \6\, we analyze the results of applying CryptoCompress to the data in ref. [4]. Conclusion gives a brief description of what we have done in this paper.

First, the input sequence which has a four letter alphabet (A, G, T, C) is subjected to trivial substitution as follows.

Then, it is divided into blocks of 256 bits. For explanation, we shall take a small sequence. Let’s consider the sequence ATTCTTAG. It can be written as 1000001100001001.Let us call it encrypted sequence E.

Since ‘E’ contains only 16-bits, we consider this as a block. (However, practically we will consider up to 256 bits as a block). Now for each block of 256 bits, do the following:

The final compressed block is:

This ‘C’ is stored as 143-bit (128+15) binary string. After completing this process for every block, the final compressed string can be made by augmenting all the compressed blocks.

The Compression is summarized as follows (Figure 1).

Step 6: Add the positions of 1’s in the input block and append the resulting sum (15 bit) to the message digest. The resultant 143(128+15) bit sequence is appended to the compressed sequence “C”.

Step 7: The resultant “C” is the compressed sequence.

In decompression phase, we divide the compressed sequence into blocks of 143 bits. Now for each block, do the following.

In the given example:

Now find all the partitions of 45 with distinct parts. For each partition, construct the corresponding binary sequence by placing 1’s in the positions of parts of the partition and 0’s in other places.

Apply MD5 cryptographic hash function on the generated sequence ieMD5 (M). This is compared with the first 128-bits. If they both are equal, we consider ‘M’ as the sequence ‘É1’ produced after trivial encryption of a block of the original sequence. In this example, we get the equality for the partition.

The corresponding binary sequence is:

After applying the above process for every block, we construct the original trivially encoded sequence by augmenting the result of all blocks.

Now the original sequence can be retrieved by replacing bits as follows.

In our example, if we apply this for ‘E’, we get ATTCTTAG which is the original sequence.

Step 1: Consider the size of a block as 143 bits. Divide the input into blocks.

Step 3: Generate the next block. If no block can be generated, go to step 10.

Step 5: Find the number of partitions of ’S’ with distinct parts that uses integers from 1 to 256 only.

Step 6: Generate the next partition.

Step 7: Generate the binary sequence for the partition.

Step 8: Apply MD5 algorithm for this sequence and compare it with the remaining 128 bits in the block.

Step 9: If the two matches, append the binary sequence to the Encoded sequence “E” and goto step 3,

Step 11: The resultant sequence is the decompressed original sequence.

This method is highly useful in compressing DNA of human like species which have low intra species DNA variability. As per the data available, any two humans differ in their chromosomal DNA by almost 0.6%. We use this property to compress the sequence. Our human DNA is 3 billion bases long. To store it we need 3GB space. To compress it, we can use Human reference DNA sequence readily available in public databases like NCBI.

We have taken one base difference between the two sequences. Practically, in a ten base sequence, the difference should be less than one base. However, to facilitate the explanation, we take it to be one base.

Applying this method for the above string, we get the output sequence as

The original string in our example is 10bytes long. Our compressed string is 1.5 bytes long. Applying the same to Human DNA, the original DNA of 3GB will be reduced to a minimum of 388 MB, i.e., we can expect a minimum compression of 87%.

Decompression is straight forward. The compressed sequence, which is converted to binary is analysed one bit at a time. If the bit is ‘0’, the corresponding base in the Reference DNA is substituted in the output. If it is ‘1’, the next two bits give the base to be substituted.

RefCompress described above is most suitable for human like creatures. It relies on the fact that humans have very low variance in their DNA. Although this method doesn’t give us a constant compression ratio, it provides us nearly constant compression due to the fact that we don’t vary much in our DNA. Since, it compares every base in the given sequence, it has a time-complexity of O(n). 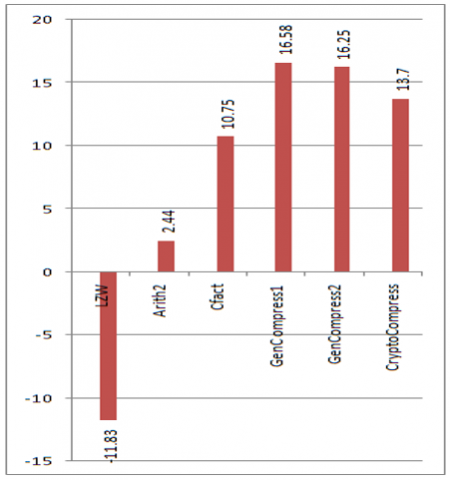 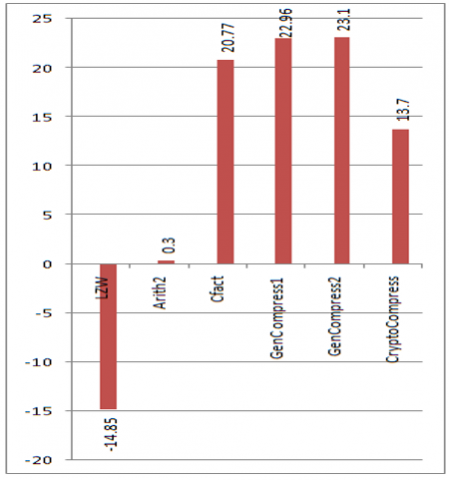 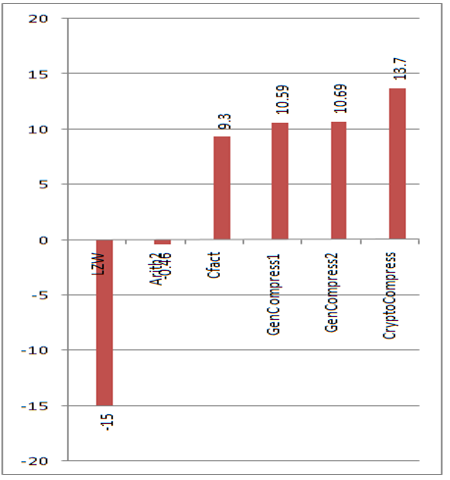 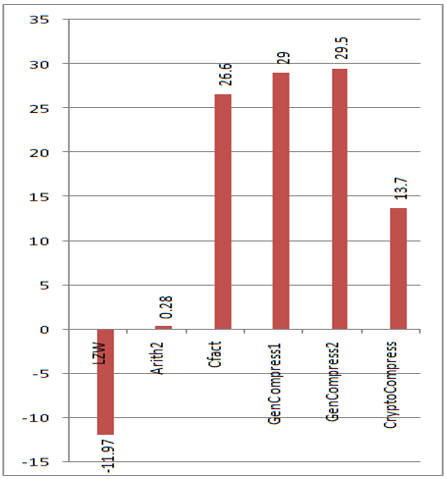 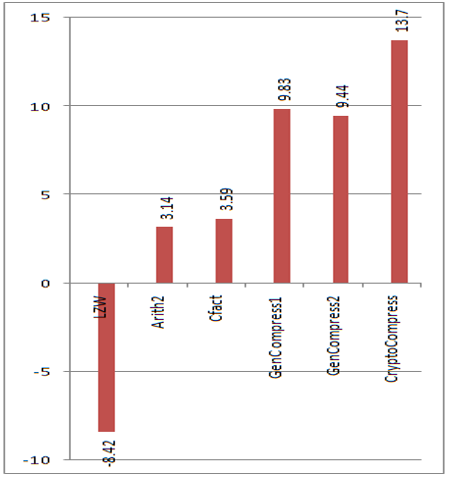 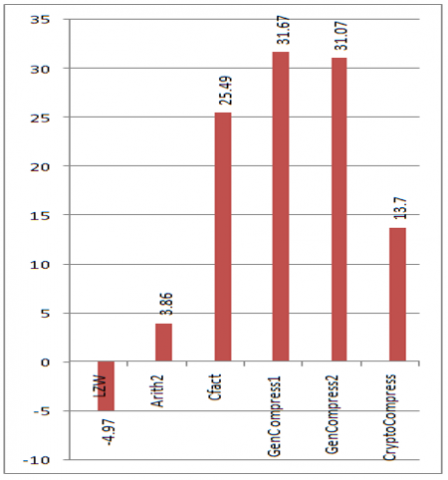 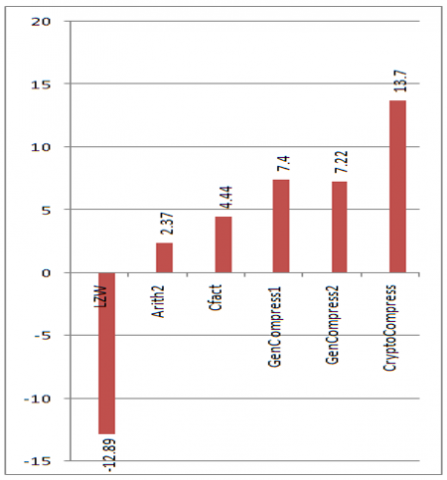 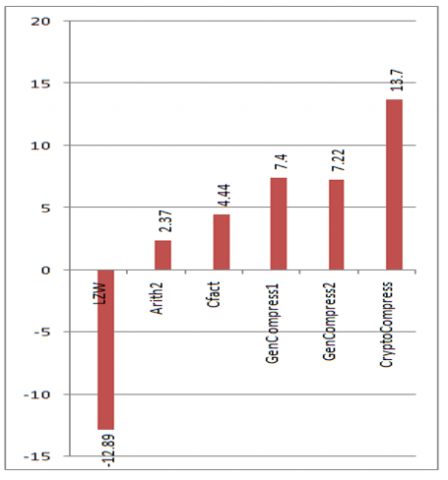 We can clearly observe that although our algorithm, Crypto Compress, doesn’t show better compression in all the cases, it did achieve a constant compression (86.3%). This optimizes the cost of storage as the needed storage can be easily calculated. However, the time complexity is the problem. The comparisons needed in the decompression phase cannot be predicted. This makes the algorithm compromise the time in place of space. This could be decreased by choosing the initial encryption wisely. Suppose, if the input sequence contains more ‘Á’ alphabet, it could be substituted with ‘00’. Thus by precalculating the frequency of the four bases in the input sequence, we could wisely choose the substitution so that the bases with high frequencies is replaced with more 0’s. This may decrease (not in all cases) the time taken by decompression phase. Using parallel processing to generate all the partitions would be another solution.

This paper discussed two methods, one cryptographic based (CryptoCompress) and the other based on Reference DNA (RefCompress). We established that these techniques can achieve a nearly constant compression ratio irrespective of the input sequence. We also discussed their drawback of having high time complexity. Further research can be made to reduce this time complexity of the algorithms proposed.