Data aggregation is an efficient method to save energy and prolong the service life of wireless sensor networks (WSNs). In light of this, a data aggregation algorithm was constructed based on self-organizing feature mapping (SOFM) neural network and WSN cluster routing protocol. In this algorithm, each cluster was designed as a three-layer neural network model, which collect a large number of raw data. Then, the feature data were extracted from the raw data, and sent to the sink node. Through a simulation experiment, it is proved that the proposed algorithm, denoted as SOFMDA, outperformed a popular data aggregation method in energy consumption and data accuracy.

Wireless sensor networks (WSNs) has been applied into Industry 4.0 for monitoring the production environment and the production process. In a typical industrial WSN, multiple sensor nodes are often deployed in a specific area to realize full coverage with some overlapping sensing ranges.  Due to the high spatial correlation of the sensing area, the data collected by these nodes are very similar, most of which are redundant and will cause a large amount of resources waste to store, transfer, process and calculate them. Furthermore, the more redundant sensing data needs the bigger storage space, the more transmission energy, the more complex data analysis and so on.

In view of the above, this paper puts forward a WSN data aggregation algorithm based on self-organizing feature mapping (SOFM) neural network, denoted as SOFMDA. Considering the location-based clustering routing protocol in the WSN, this method utilizes the SOFM neural network to analyze and classify the sensing data and extract data features in order to deduce the redundant data and then make a reduction of the storage space, the transmission load and energy consumption and simplify the continued data mining process.

Output is the most typical organization of SOFM network in two-dimensional plane. Each neuron in the output layer is connected laterally with other neurons around it and arranged in a chessboard plane. Its structure is shown in Figure 2. 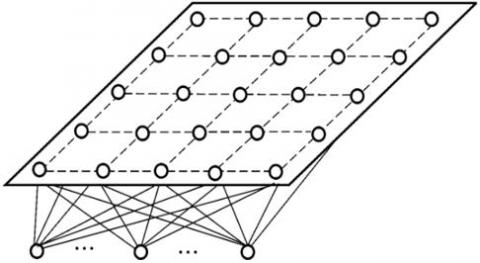 The training process of SOFM neural network is:

Step1: a small random initial value is preset for the reference vector of all output neurons.

Step2: provide a training input mode for the network.

Based on spatial correlations, Wang et al. [3] developed a data aggregation algorithm that classifies and fuses sensor data according to the spatial location and data features, and proved that the algorithm outperforms the reliability assessment algorithm (RAA) in energy consumption, data acquisition and aggregation effect.

Akkaya et al. [4] presented a data-centric aggregation technique, i.e. a fuzzy clustering (VF) algorithm, based on Voronoi diagram, and confirmed through simulation experiments that the algorithm can effectively improves the network performance. In this algorithm, the data are aggregated at the cluster head, in light of the residual nodal energy, the service quality and the distance between the cluster head and the neighbor node.

2.3 Application of neural networks in WSNs

Much research has been done on the application of neural networks in WSNs. For instance, Sharaf et al. [5] uses multi-layer perceptron (MLP) neural networks to identify abnormal events based on the WSN signal changes. Attea and Khalil [6] created an adaptive routing algorithm for the WSN based on neural network, and verified through simulation experiments that the algorithm is 0.8 times more efficient than the efficient multi-hop hierarchical routing (EMHR) algorithm; in this algorithm, the cluster head is selected through neural network adaptive learning at the base station and the next hop in the shortest path is determined according to the optimal weight function.

Barbancho et al. [7] applied SOFM neural network to the WSN for the first time, and proposed a wireless sensor routing protocol based on the SOFM, which fails to consider data aggregation. Sung [8] completed data aggregation using a three-layer perceptron neural network, which is developed from backpropagation (BP) neural network and WSN clustering routing protocol, and discovered that the neural network can outshine the LEACH algorithm if there is a training output set [9]. Inspired by Sung, Zhang et al. [10] introduced the processing of data features to the LEACH algorithm and found that the improved algorithm cannot work without training output set. 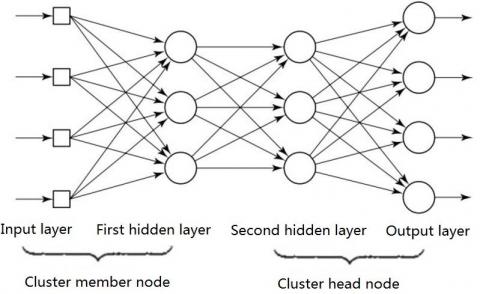 From the point of view of the overall wireless sensor network, one sensor node is considered as one of the bottommost neurons. The cluster head node is an intermediate neuron that acts as a convergence, and the entire network can be seen as a complex nervous system.

The weight $w_{1}, w_{2}, \dots w_{n}$ is crucial for the output layer neurons. It is an important parameter of the SOFMDA model. In some neural networks, these weights can be learned, trained, and adjusted through the network itself. In the wireless sensor network, due to the limitations of system resources such as communication, CPU and storage space, it is impossible to train the weights within the wireless sensor network. Therefore, the SOFMDA model does not train these weights, but does this outside the wireless sensor network. Then, the weight parameter can be sent to all sensor nodes through the aggregation node. In practical applications, the weight changes very slowly, and the sink node does not send these parameters to the sensor nodes frequently.

In the test, the SOFMDA model was evaluated mainly through two indicators: (1) Average energy consumption of sensor nodes. It only calculates the energy consumed by the wireless transceiver module to send and receive messages. It does not include other hardware modules (such as MCUs and sensors). (2) Average communication load: It calculates the number of times the sensor node needs to send a data packet to the sink node (the average number of hops from the data source node to the sink node). 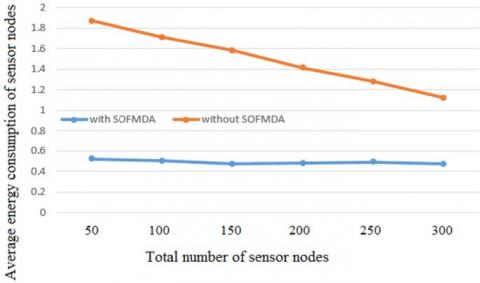 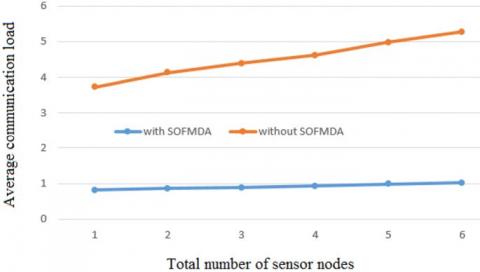 From the result of the simulation test, after using the SOFMDA data aggregation algorithm, it effectively reduced the communication load in the network and played a role in saving energy consumption.

his paper proposes a WSN data aggregation algorithm based on SOFM neural network, and denotes it as the SOFMDA. Considering the location-based clustering routing protocol in the WSN, the intra-cluster nodes were taken as the input layer neurons of the SOFM neural network, while the cluster head nodes, relying on the SOFM neural network, classify the data and extract data features, and then send the feature data to the sink node, thereby reducing the transmission load and energy consumption. Through a simulation experiment, it is proved that the proposed SOFMDA can effectively reduce the transmission volume through the classification of original data and the extraction of similar data features. The research findings shed new light on energy reduction, channel pressure relief, channel utilization improvement and service life extension of WSNs.