Hydrodynamics of Reservoirs in Arid Areas and Its Influencing Factors

Hydrodynamics of Reservoirs in Arid Areas and Its Influencing Factors

Objective of this research is to accurately stimulate the hydrodynamic process in reservoirs thereby summarizing the hydrodynamics in reservoirs and figuring out its impact on the migration, conversion, and concentration of pollutants. For this purpose, this paper employed a 2D unstructured shallow water hydrodynamic model to perform numerical simulation on the flow field of the Yazidang Reservoir, one of the major reservoirs in the Ningxia Hui Autonomous Region of China; grids of shore boundaries in the model were densified to better fit the terrain changes at the boundaries, and the impact of wind field, and inflow/outflow on the flow field in the target reservoir was studied. The research findings suggest that, wind velocity has a great impact on the circulation intensity of the target reservoir, but it has no obvious impact on the circulation structure; the inflow and outflow have a certain impact on the area near the water inlet and outlet, and the range of this impact is related to the size of water volume of the inflow/outflow; under calm wind condition, the flow field of Yazidang Reservoir is entirely determined by the inflow and outflow, but the impact on the area far from the water inlet and outlet is very small, and wind field is one of the decisive factors for the flow field of Yazidang Reservoir. The research conclusions attained in this paper could provide useful theoretical evidences for the water ecological security of Yazidang Reservoir.

Since the hydrodynamics of shallow lakes generally have the features of uneven spatial distribution and small circulation volume, which makes it difficult to study it through simultaneous observations [2], so the numerical simulation method is often adopted to solve this problem [3]. For example, scholar Simons [4] developed numerical models to study the hydrodynamics of Lake Ontario for the first time, and briefly introduced the construction of 3D hydrodynamic equations. In the Chinese academic circle, key targets of research on lake reservoirs include 6 major lakes and 3 major reservoirs [5] such as the Taihu Lake and the Three Gorges Reservoir. Xu and Liu [1] established a 2D shallow water hydrodynamic model for Taihu Lake, analyzed the basic flow state of the wind-induced circulation in Taihu, and carried out numerical simulation on the features and laws of the hydrodynamic distribution of Taihu under different wind conditions. Hu et al. [6-8] carried out numerical simulation on the 3D hydrodynamics of Taihu Lake, and respectively studied the wind-induced circulation of Taihu from the aspects of wind-driven surges, typical wind field, and the reclamation project of Wuxi Mashan. Han et al. [9] studied the impact of wind velocity on the structure of stratified flow field and the vertical average flow field in Zhuhu Lake, they gave the critical wind velocity value under the combined effects of wind field and inflow/outflow, and discovered that wind direction and inflow/outflow are the primary influencing factors of critical wind velocity. Through these research findings, we can understand the changes in the wind-induced circulation of the lake area under different wind fields, however, studies about the impact of terrain and inflow/outflow on the lake flow field are insufficient. Zhang et al. [10] studied the impact of some typical lake bottom terrains on the lake flow field, and found that the changes of lake bottom terrain have an impact on the average wind flow field of each layer. Jiang et al. [11] studied the flow field of Taihu Lake under two conditions: one condition is the actual lake bottom terrain of Taihu, while the other condition assumed the lake bottom is flat; and their research found that no circulation has been formed under the flat lake bottom condition. Han et al. [12] studied the impact of inflow/outflow on the flow field structure of Zhuhu Lake. Existing studies mostly focus on the impact of wind velocity, wind direction and terrain on lake circulation. Although it’s clear that lake shore boundaries do have a certain impact on lake circulation, the quantitative research is insufficient, and fewer of them have concerned about the impact of terrain, wind field, and lake inflow/outflow on the flow field of the reservoir.

Based on previous studies, we designed multiple work conditions for the numerical simulation of circulation in the Yazidang Reservoir, and established a 2D shallow water hydrodynamic model to simulate different wind fields, inflow/outflow volumes, and inlet/outlet methods to study the circulation in the target reservoir and its influencing factors, in the hopes of offering evidences for ensuring water safety of Yazidang Reservoir.

Since the simulation and calculation of the hydrodynamics of the target reservoir must deal with irregular boundaries and complex terrains, this paper built a 2D hydrodynamic model using unstructured triangular grids, in which any triangular is taken as the unit of calculation. A finite-volume unit center method was adopted to solve the equations, and the established 2D hydrodynamic model was used to calculate the hydrodynamics of the target reservoir [13-17] and analyze the hydrodynamic process under different influencing factors, thereby providing theoretical evidences for the management of water environment and the improvement of water quality of the Yazidang Reservoir.

Hydrodynamics equations of the water flow:

The model was solved by the finite volume method, the vertical direction was transformed by σ coordinates, the horizontal direction was solved by rectangular or orthogonal curvilinear coordinates. The dynamic equations were solving by the finite difference method, the horizontal direction was subject to staggered grid discretization, the second-order precision finite difference method and the internal/external schema splitting technology were adopted for time integral, and a limiter function in second-order TVD format was used to avoid numerical oscillations.

Since the Yazidang Reservoir only covers a small area and it is irregular in shape, this paper used unstructured grids to better fit the complex lakeshore boundaries. 6295 nodes and 21626 units had been set; the meshing of the Yazidang Reservoir area is shown in Figure 1. The terrain was interpolated into each grid node using an inverse distance weighted method. To better fit the terrain changes at the boundaries, the grids near the lakeshore boundaries were densified, a map of the topography was attained, as shown in Figure 2. The initial water level of model operation was taken as an approximation of the actual initial conditions, the initial water level was set as an elevation of 346m, and the initial flow velocity was 0m/s. 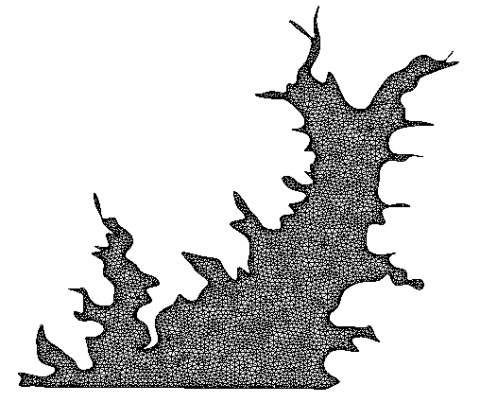 Figure 1. Meshing of the Yazidang Reservoir 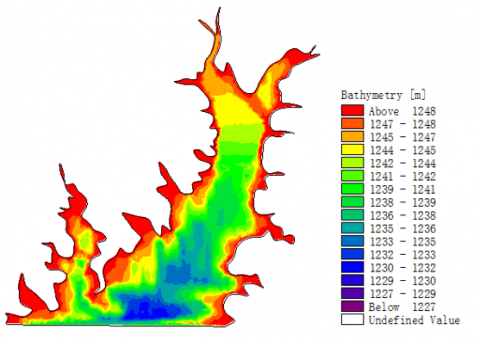 Figure 2. Topography of the Yazidang Reservoir

3.1 The impact of wind velocity on flow field 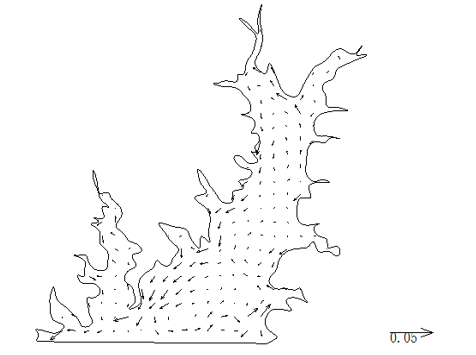 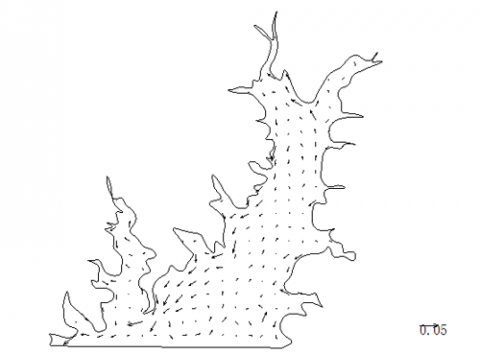 3.2 The impact of wind direction on flow field

In this section, the impact of wind velocity on the flow field in the target reservoir was studied, and it’s found that wind velocity didn’t have a great impact on the structure of the flow field, but its impact on flow velocity was relatively large. In previous studies, different wind directions have similar flow patterns but different directions of lake circulations, the research about the impact of wind direction on flow velocity is insufficient. Therefore, we designed simulation test to investigate the changes in the flow field structure, flow velocity, and flow direction of the target reservoir under 2.7m/s N wind and SE wind. 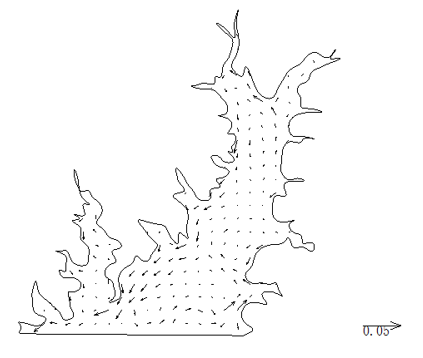 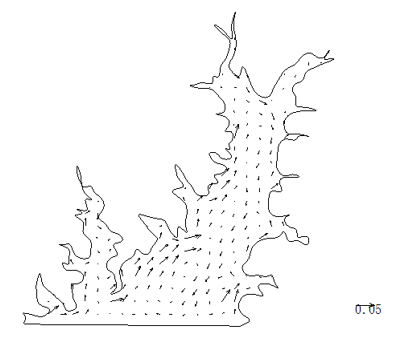 3.3 The impact of water volume of inflow/outflow on flow field 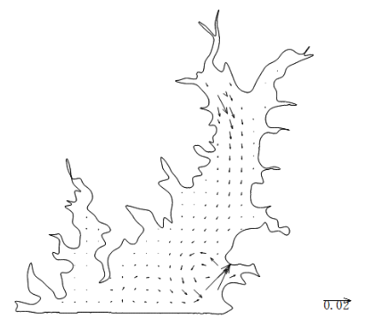 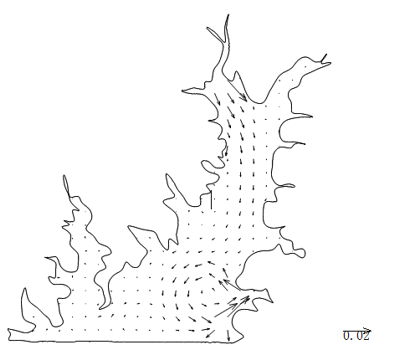