Considering the complexity in the calculation of reference vectors and the selection of switching states, this paper puts forward a novel algorithm for the space vector pulse width modulation (SVPWM) for multi-level inverters. By this algorithm, the multi-level SVPWM is generated by triangulating the sector to a two-level sector in space vector diagram and using the two-level SVPWM formulas, thereby eliminating the need for lookup tables in sector identification. The proposed algorithm can be extended to an n-level inverter, which is easy to achieve and suitable for high-power, high-voltage applications. Then, an H-bridge/neutral point clamped (H-NPC) inverter was adopted to explain the proposed algorithm. Finally, the proposed algorithm was proved valid through simulation experiments.

To identify sectors, coordinates of the reference vector can be transformed to two dimensional coordinates. Another method is to decompose the reference vector to three-phase coordinate systems and to compare it with three-phase discrete phase voltage. After sectors are identified, the voltage vector of the sector tip can be identified. The synthesizing voltage vector of the sector tip and the switching sequences can be obtained from lookup tables. Calculation of on-time can help map the identified sector into the corresponding sector in the two-level vector diagram (Cheng and Wu, 2007; Aneesh Mohamed et al., 2009).

In order to achieve high output voltage in high-power transmission, a cascade inverter structure with clamped multi-level inverters and power units in series is usually adopted (Buccella et al., 2014; Yao et al., 2008; Zhang et al., 2011). How to calculate switching state and vector action time simply and effectively has always been a hot topic in the research of multilevel inverters.

In the paper, a novel SVPWM algorithm is studied. In the n-level voltage vector diagram, each sector can be divided into four subsectors, and each subsector can be further separated into four smaller sectors until an equivalent two-level sector is formed. The sector that contains reference vectors is mapped into the two-level sector, whose two-level SVPWM is used to generate multilevel SVPWM. The proposed algorithm uses simple equations to identify sectors, thus there is no need to refer to lookup tables. Redundant vectors as needed can be obtained automatically without lookup tables. The proposed algorithm for generating SVPWM for multilevel inverters is explained for a five-level HNPC inverter. The generalized algorithm can be extended to any n-level inverter.

Phase A of the five-level HNPC inverter is composed of two NPC bridge arms. Its topology is shown in Figure 1, where Sa11, Sa12, Sa13, Sa14, Sa21, Sa22, Sa23, Sa24 are power electronic switching devices. Each bridge arm has two clamped diodes. The DC side voltage is 2E, the capacitance Ca1=Ca2, and all of the capacitor voltages are E. Phase B and phase C share the same structure with phase A. Table 1 shows the relationship between the output voltage of the five-level HNPC inverter (uan) and switching states, where “1” denotes the turn-on state of the switching devices and “0” denotes the turn-off state of the switching devices. 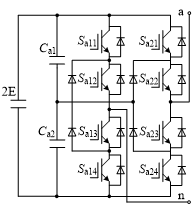 The voltage vector diagram of a three-phase voltage source inverter is regular hexagon with six sectors. As the six sectors share the same structure, the proposed algorithm is explained only for the first sector, being explained in the same way as the other five sectors. 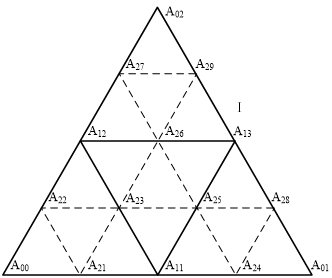 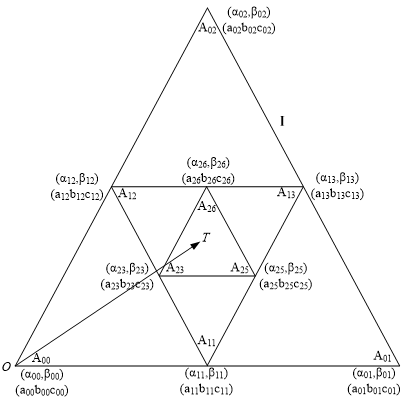 Triangularization of the voltage vector diagram means a constant division of a multilevel voltage vector diagram into small sectors. For each stage, referring to the neutral point of the sector boundary, each sector is divided into four small sectors. Such pattern continues until a higher level voltage vector diagram is formed. For instance, as shown in Figure 3, in two-level sector Ⅰ, the coordinates of the three vectors A00, A01 and A02 are (α00, β00), (α01, β01) and (α02, β02), respectively. The coordinates of A11, A12 and A13 that are located at the neutral points of the sector boundaries can be obtained from those of A00, A01 and A02. For example, the coordinate of A11 is obtained by equation (1) as follows.

where x denotes the three phases, namely a, b and c. Equation (1) and equation (2) are used to generate voltage vectors that locate at the neutral points of the sector boundaries to further divide the triangular sector into four small sectors. 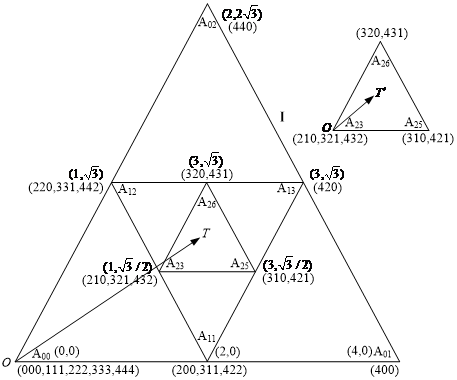 The proposed algorithm for generating SVPWM for multilevel inverters is explained for a five-level HNPC inverter. SVPWM is achieved through the following four steps: 1) sector identification; 2) determination of synthesizing vectors; 3) calculation of the on-time for each synthesizing vector; 4) optimization of switching sequences.

Through repeated usage of the triangularization equations, the sector of the reference vector is identified. The three vertices of smaller sectors denotes the voltage vectors of the synthesizing reference vector. The three-phase instant voltage value (ua, ub, uc) is used to identify the coordinate (α,β) of the reference vector. The coordinate of n-level vector should be divided by Vdc/(n-1) to generate the corresponding per-unit coordinate, where Vdc denotes DC side voltage. In the five-level vector diagram, the six vectors that form the periphery of the regular hexagon are the same with those of the two-level regular hexagon.

As shown in figure 4, the reference space vector OT is used to explain five-level triangularization. Firstly, we identify the location of the large sector that contains the reference vector. The reference vector is composed of A00, A01 and A02. The coordinates of its vertices are (0,0), (4,0) and (2, 2√3), respectively, and its corresponding switching states are shown in Figure 4. The redundant state that exists in the switching states of A00 is (000,111,222,333,444). The switching states of A01 and A02 are (400) and (440), respectively. The five-level vector diagram demands two calculations. For the first one, there come four small triangles. The newly generated vectors locate at A11, A12 and A13, which divide sector 1 into four small sectors, namely ΔA00A12A11, ΔA11A12A13, ΔA11A13A01 and ΔA12A02A13.

The average coordinate value of the three vertices of the small hexagon is the centroid. For the equilateral triangle, the coordinates of its vertices are (α1,β1),(α2,β2) and (α3,β3), respectively. The equation of the centroid (αcent,βcent) is given as:

The small sector whose reference vector is the nearest to the centroid is ΔA11A12A13. For the five-level vector diagram, another triangularization calculation is done to divide ΔA11A12A13 further into four smaller sectors, thus identifying that the reference vector is located at ΔA23A26A25. Once the sector is identified, one can obtain the corresponding synthesizing vector of the sector vertex.

4.2. Calculation of the on-time of the synthesizing vector

As shown in Figure 4, in sector identification, OT is located at ΔA23A26A25. The coordinates of the vectors A23, A26 and A25 are (0,0), (4,0) and (2, 2√3), respectively. The sum of the absolute coordinate values of A23 is minimum, thus A23 is chosen as the virtual zero vector to map the multilevel reference vector OT into a two-level reference vector OT’. After the mapping, equations in Table 2 can be used to obtain T1 and T2, the on-time of two nonzero vectors. And we can further determine T0, the on-time of the virtual zero vector.

Table 2. Equations for determining T1 and T2 for a two-level inverter

To verify the validity of the method in this paper, we establish a five-level HNPC inverter prototype and adopt the controller with DSP and FPGA, which is shown in Figure 1. DSP uses TI’s TMS28335 to complete the main program and SVPWM operations. FPGA uses Actel’s A3P250 and is responsible for the driving signals of the switch devices with the sampling frequency fs = 2kHz and the modulation degree mi=0.9. Prototype parameters are: the DC side capacitance C=4700μF, the capacitor voltage E=100V, and the three-phase symmetric resistance-inductance load L=3mH, R=10Ω. Figure 5 shows the phase voltage uan and line voltage uab simulative waveforms. Figure 6 shows the line voltage uab and phase current ia experimental waveforms. The simulative waveforms and experimental waveforms have good quality and is capable of verifying the validity of the proposed algorithm. 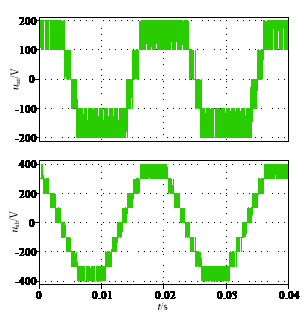 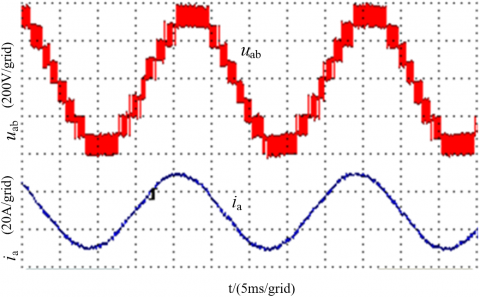 This paper researches a general space vector pulse width modulation (SVPWM) for multilevel inverters. This easy and effective algorithm takes advantage of sector triangularization in identifying positions of reference vectors. After sector identification is finished, the switching states of corresponding switching vectors can be generated simultaneously without lookup tables.  The two-level SVPWM formulas is used to generate multilevel SVPWM. The proposed method for generating SVPWM for multilevel inverters is validated for a five-level HNPC inverter, and simulative and experimental results verify the validity of the method in this paper.