Flexible pavement is the preferred pavement type in construction of roads and highways. A huge amount of non-renewable materials and industrial products like Olive Husk Ash (OHA), aggregates, bitumen, cement, lime, and other additives are used during the construction and maintenance of the pavement system. Needless to say, the extraction and production of these materials are unmaintainable. Moreover, the wastage of materials, the worsening environmental conditions, the insufficient resources, and the increasing cost of material urged the researchers to look for alternative materials that can be used in flexible pavement. Jordan as many other Mediterranean countries produces a substantial amount of olive oil every year, which in turn produces an enormous amount of olive waste that could lead to environmental problems. Up to now, there is no efficient or certain way in which olive oil waste could be handled or used except that it is sometimes used for heating purposes. The current research aims to evaluate the effects of Olive Husk Ash (OHA) on asphalt binder properties such as penetration ductility, softening point, fire and flashpoint, and specific gravity. In the current research, OHA is used as an additive (0%, 5%, 10%, 15%, and 20%) of asphalt-cement. Tests on OHA-asphalt binder properties are conducted and results are reported. Results of experimentation and analyses indicate that increasing OHA content in the asphalt-cement binder has resulted in a reduction of both penetration and ductility and an increase in specific gravity, softening point, and fire and flashpoint.

A flexible pavement is a pavement layer comprising of a mixture of aggregates and bitumen, heated and mixed properly and then laid and compacted on a bed of granular layer. A huge amount of non-renewable materials and industrial products like Olive Husk Ash (OHA), aggregates, bitumen, cement, lime, and other additives are consumed during the construction and maintenance of a pavement system. The extraction and production of these new materials is an unmaintainable practice. Wastage of materials, environmental worsening, reduction of resources, and the rise in material cost forced researchers to look for alternative materials that can be used in flexible pavement.

Due to the current high traffic density and loads worldwide, it has become necessary to develop a new asphalt pavement that can withstand these conditions with enough durability and minimum cost of maintenance. Since the 1950s, several procedures and materials such as rubber and ash have been used to improve the behavior of the asphalt mixtures.

Al-Massaid et al. [1] investigated the properties of asphalt oil shale ash bituminous mixtures under normal and freeze-thaw situations. The authors found that the replacement of ash up to ten percent by volume of asphalt binder has improved the behavior of mixtures under both situations. This replacement has resulted in increasing stability, tensile strength, modulus of stiffness, resistance to freeze and thaw damage of the paving mixture compared with mixtures when the ash is not used. Similar studies by Al-Massaid et al. [2] and Al-Mashgbeh [3] indicate that additives, such as rubber, olive husk ash, and ash will increase asphalt mixtures resistance to permanent deformation and fatigue cracking with a cheaper cost than the ordinary asphalt concrete mixtures.

Al Qadi [5] studied the effect of oil shale ash on fatigue characterization and creep properties of asphalt concrete mixtures. To conduct his study, the author used the Universal Testing Machine (UTM), using Marshall specimens with five levels of oil shale ash (0, 5, 10, 15, and 20%) by volume of binder. The author found that oil shale ash content had a slight effect on the accumulated strain, the stiffness modulus, and the resilient modulus.

Hui et al. [7] investigated the properties of rubber modified asphalt binder at low temperatures. The authors concluded that some types of rubber, especially the crumb rubber, have increased the fracture toughness of the binder.

Gautam et al. [11] investigated the effect of using recycled materials in several layers of pavements. The authors indicated that the use of secondary material not only provided an effective waste disposal approach but also reduced both the request on regular material and the total cost of construction. However, their fields of application were limited. The authors suggested several solutions to encourage the use of recycled material in the pavement.

A review of literature has revealed that little has been accomplished to investigate the effect of OHA when added to asphalt mixtures. Therefore, the current research aims to evaluate the effects of OHA on asphalt binder properties, such as penetration, ductility, softening point, fire and flashpoint, and specific gravity. This research is expected to help resolve the problem of disposal of the olive husk ash. Olive Husk became an environmental problem as waste materials especially in the Middle East where huge quantities are found.

Asphalt cement (binder) is the liquid bituminous material used as the bonding material in the asphalt mix. Asphalt cement is extremely good as waterproofing material unchanged by almost acids, alkalies, and salts. It is called a thermoplastic material because it unstiffens as it heated and toughens as it cooled. This single subset of characteristics and properties is a basic reason why asphalt is considered as a paving material.

2.2 Method of preparation of OHA–asphalt binder

Various tests are used for determining and measuring the properties of asphalt cement (binder) with the addition of OHA. For each blend of OHA-asphalt, measurements for penetration ductility, fire and flash point, softening point, and specific gravity were conducted. An average value of three specimens’ measurements for each blend is listed in Table 3.

The ductility of a bituminous material is measured by the distance to which it will elongate before cracking when two ends of a briquette specimen of material are pulled apart at a precise speed and a precise temperature. The test shall be made at a temperature 25±0.5℃ and with a speed of 5cm/min ± 5.0%. The ductility for each blend has been measured and an average value for three specimens’ measurements is reported.

This test covers the determination of the softening point of asphalt in the range from 30℃ to 175℃ using the ring and ball apparatus in an ethylene glycol bath. A steel ball of specified weight is located upon a disk of a sample contained within horizontal equipment. The component is heated in the path. Prescribed rate and the softening point taken as the temperature at which the sample becomes soft enough to allow the ball envelop in the sample material, logged the temperature when the ball attaches the plate.

The softening point is described as the temperature at which a bitumen sample is not able to stand the weight of a 3.5-g steel ball. The Ring and ball apparatus was used to obtain the softening point for each blend of the OHA-asphalt.

This method covers reporting flash and fire points of all petroleum products except fuel oils. The procedure is as follows: First, the test cup is filled to a certain level with the specimen. Then, the temperature of the specimen is increased rapidly at first and then at a low constant rate as the flashpoint is reached. After that, and at specified intervals, a small test flame is passed across the cup. The lowest temperature at which the application of the test flame causes the vapors above the surface of the liquid to ignite is taken as the flashpoint. Also, to report the fire point, the test is continued until the implementation of the test flame causes the oil to ignite and burn for at least 5 seconds. This test was used to obtain the flash and fire point for each blend of OHA-asphalt mixtures. Executed on the OHA-asphalt mixture, the flashpoint of a mixture is calculated to guarantee that it is okay to work with the mixture at construction temperatures.

The specific gravity of asphalt cement (binder) is being used mainly for two reasons.

(1) Asphalt enlarges when heated and shrinks when cooled; this means that the volume of a given amount of asphalt cement (binder) will be increased at higher temperatures and decreased at lower ones. Thus, there must be designates measures to modify the temperature-volume.

(2) It is necessary to determine the percentage of voids in the compacted pavement. The addition of OHA to asphalt cement (binder) was in several percentages. These percentages were recorded and reported when used.

Several tests were conducted according to the ASTM designation to investigate the effects of OHA content by volume of binder (0%, 5%, 10%, 15%, and 20%) of asphalt-cement. Asphalt binder properties with ash are listed in Table 3 and shown in Figure 1 below. Equations and R-squared values are displayed in Figure 1.

The effects of OHA percentage on the penetration of the OHA-asphalt-cement binder are shown in Table 3 and Figure 1(a). Report to the nearest whole unit the average of three penetrations whose values do not differ from the standard. It can be seen that an increase of OHA content will decrease penetration which can be explained by the fact that adding OHA to the asphalt-cement will increase its hardness. 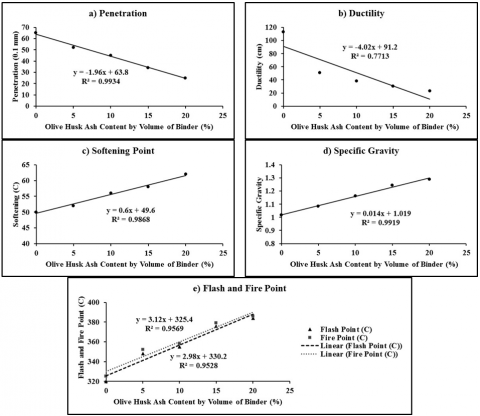 Figure 1. Effect of olive husk ash on properties of asphalt-cement

In this study, OHA is used as an additive (0%, 5%, 10%, 15%, and 20%) of asphalt-cement to investigate the effects of OHA on asphalt binder properties such as penetration ductility, softening point, fire and flashpoint, and specific gravity. The following conclusions are drawn from the current research:

(1) The increase of the Olive Husk Ash (OHA) additive content has resulted in a decrease in values of penetration and ductility of OHA-asphalt binder according to the following linear regression equations:

(2) The increase of the Olive Husk Ash (OHA) additive content has resulted in an increase in the values of the softening point, fire and flashpoint, and specific gravity of OHA-asphalt binder according to the following linear regression equations:

The authors would like to express their sincere gratitude to the Civil Engineering Departments of Jordan University of Science and Technology, Ajloun National University, and the UAE University for their help in conducting this research.