The mud content in sand and gravel suppresses the fluidity and water reducer effect of concrete. To disclose the impacts of mud content on water reducer, this paper explores the microscale interaction between three kinds of mud (i.e. montmorillonite, kaolin and illite) and one water reducer (i.e. polycarboxylate superplasticizer), and tests the compressive strength and porosity of cement mortar with each type of mud. In addition, an anti-mud agent was prepared to enhance the dispersion effect of the water reducer. The results show that the compressive strength of hardened cement mortar is negatively correlated with mud content. The equilibrium zeta potential of two types of mud is higher than that of cement particles. The optimal reaction conditions for the anti-mud agent are weak alkalinity, reaction temperature of 70 °C, initiator dosage of 6 %, and reaction time of 5h. The research findings provide new insights into the development and application of water reducer with anti-mud agent.

Sand and gravel form the “skeleton” of concrete. The two materials directly affect many mechanical parameters of concrete, such as compressive strength and the elasticity modulus [1, 2]. However, the sand and gravel resources in China are quickly depleting. As a result, the quality of sand and gravel used in concrete is often not up to standard. For example, the mud content (>20 %) of unwashed sand and gravel severely exceeds the limit, due to the high bulk porosity (>45 %) of the two materials [3]. The high mud content has a negative impact on concrete performance [4]. In fact, mud inclusion is one of the top three threats to concrete performance, alongside with syneresis cracking and bleeding [5]. This threat can be solved by the addition of water reducer, a popular additive to the concrete.

The mud removal effect of water reducer depends on the adsorption competition of mud powder and cement. After being added to the concrete, the water reducer is absorbed on the surface of mud powder with anionic groups. In many cases, the mud power outperforms the cement in the adsorption capacity and adsorption rate of water reducer [11]. Therefore, it is very meaningful to study the effects of the mud in sand and gravel on the performance of water-reducing agent. Understanding the effects helps to improve the mechanical strength and durability of concrete [12].

This paper probes into the effects of mud content in sand and gravel on water reducer in concrete, and models the microscale interaction between mud powder and water reducer.

According to the X-ray fluorescence (XRF) results (Table 1), the main test materials include three kinds of mud (i.e. montmorillonite, kaolin and illite) and one water reducer (i.e. polycarboxylate superplasticizer). The three kinds of mud were mixed with sand and added to the concrete. The mud content of concrete samples was controlled between 1 % and 10 % (mass percent). Tables 2 and 3 list the mix ratios of cement mortar and concrete for the test, respectively.

The mechanical strength of hardened cement mortar was tested according to the Standard for Test Method of Mechanical Properties on Ordinary Concrete (GB/T 50081-2002). Three concrete samples (size: 150mm*150mm*150mm) were prepared with each type of mud. The mean value of the three samples was obtained as the final value for the concrete with the corresponding type of mud. To characterize the apparent morphology of mud and cement, mud powders and cement particles were attached to the conducting resin, and their zeta potentials were measured by an electrophoresis apparatus. In addition, the viscosity of the cement mortar with different contents of each type of mud was tested every 15min using an NDJ-5S digital rotational viscometer. 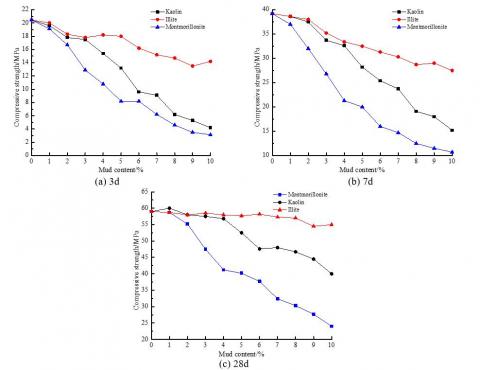 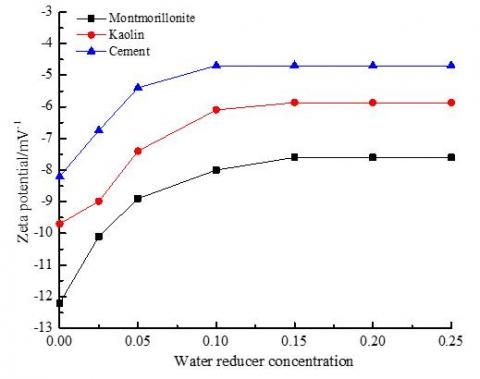 The dispersion resistance of concrete also depends on the retention time of cement particles in the polycarboxylate superplasticizer solution. 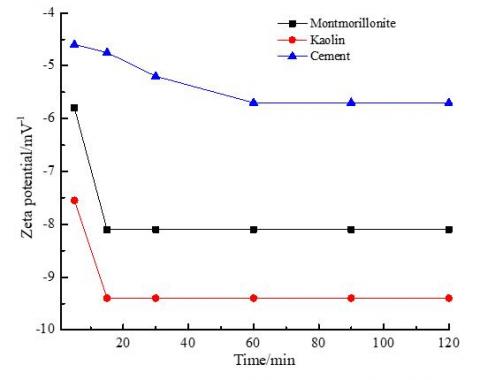 3.4 Relationship between viscosity and retention time 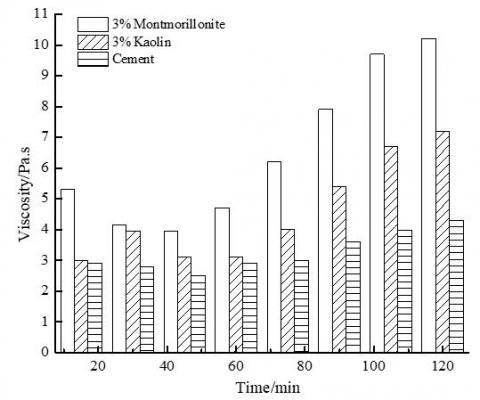 All types of mud weaken the working performance of polycarboxylate superplasticizer, but to varied degrees. To mitigate the weakening effect, a mud-resistant polymer was added to the concrete, forming a synthetic anti-mud agent with polycarboxylate superplasticizer. The effectiveness of the anti-mud agent may be influenced by reaction temperature, initiator dosage, reaction time and pH.

Table 4 sums up the influence of reaction temperature on the performance of the anti-mud agent. According to the data in the table, the mud-containing cement mortar flowed through the marsh cone in the shortest time under 70 °C. This means the synthetic anti-mud agent has the best dispersion effect at 70 °C. 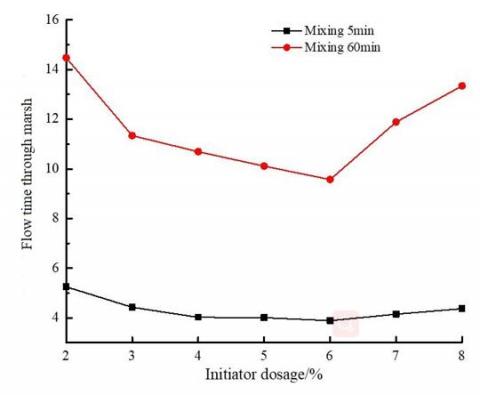 Figure 5. The relationship between flow time through marsh cone and initiator dosage

Table 5 describes the influence of pH on the performance of the anti-mud agent. As shown in the table, as the pH increased, the mud-containing mortar took a longer time to flow through the marsh cone, reflecting a decline in mortar fluidity. This means the mud resistance weakens in an acidic environment. Therefore, the anti-mud agent should be synthetized in a weak alkaline environment. 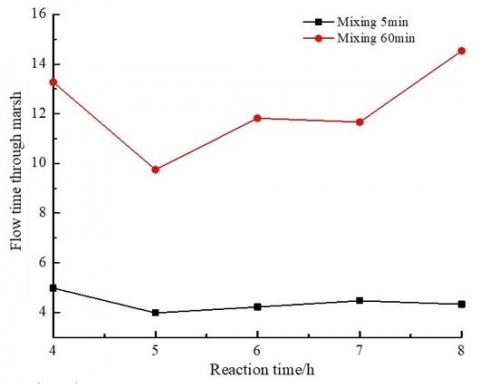 Figure 6. The relationship between flow time through marsh cone and reaction time.

Table 5. The relationship between flow time through marsh cone and pH

Table 6. Mix ratio of cement mortar with each type of mud

This paper studies the impacts of mud content in sand and gravel on water reducer in concrete, and explores the microscopic mechanism between mud powder and water reducer. The main conclusions are as follows: