The joint is the core of the force transmission between the beam and column in the reinforced concrete frame structure, which is the key link of the building structure system. Due to the brittleness of concrete itself and the inconsistency of deformation between reinforcement and concrete, the bond between reinforcement and concrete in joint area should be deteriorated, even splitting failure occurs at the interface under seismic load [1]. In order to ensure the ductility and energy dissipation capacity of the joints, the stirrups are commonly used in the joint area to increase the strength of the concrete and thus form a "strong joint" [2]. However, this method shall lead to the accumulation of steel bars at the joints, and affect the quality of concrete pouring, making it difficult to bond the steel bars and concrete well. Besides, it is difficult to make maintenance and reinforcement once the joint is damaged. Many scholars at home and abroad have solved the problems caused by the frame joint failure for improving the performance of concrete materials, and conducted a lot of research on high performance concrete [3]. PVA fibre concrete has higher tensile strength, crack resistance and impact resistance than ordinary concrete. When the PVA fibre concrete is applied to replace some of the stirrups in the joint area, the use of stirrups shall be reduced, which facilitate the concrete pouring, ensure the bond between the steel and the concrete, and finally increase the strength, stiffness and ductility of the joints [4].

Compared with steel fibre reinforced concrete, PVA fibre reinforced concrete is lighter and more convenient for construction. In 1985, Japanese scholars took the lead in applying PVA fibres to cement-based composites. In 1992, Professor Victor Li of the University of Michigan and Professor Christopher Leung of the Massachusetts Institute of Technology published a paper in the ASCE Journal of Engineering Mechanics (Vol.118, No. l1, 2289-3018), stating that the application of PVA fibre can develop the Engineered cementitious composites (ECC) with strain hardening and multi-channel cracking properties. Since then, extensive research on ECC materials has begun around the world.  Kanda [7] analysed the effects of the two factors such as span-depth ratio and shear reinforcement, and tested the "Ohno Shear Beam"; the results showed that the load of ECC increased by half compared to the plain concrete in case of shear compression failure. VasillagXoxa [8] systematically studied the shear properties of PVA-ECC using the plane pure shear test, finding that the PVA-ECC plate has good shear ductility. Xu Shiniang and Li Hedong [9] conducted the test of ultra-high toughness cement-based composite materials, and obtained that the ultimate flexural strength at 28 days of age was about 16.01MPa, the tensile strength was about 3.16MPa, and the ratio of the two was 5.07, far more than 3, which shows the excellent bending resistance of this material.

The test was carried out by changing the dosage of the fibre. The mechanical parameters of the materials and specimens are shown in Table 1, 2 and 3.

The experiment mainly studied the mechanical properties of the join core zone and the plastic zone at the beam end. It used the small axial pressure ratio of 0.15, ignoring the P-δ effect of the column end, and made the beam end cyclic anti-symmetric loading. In this experiment, the top shaft pressure was first applied until reaching the pre-set axial compression ratio by a 100T actuator. After the axial force was stabilized, two 50T actuators were used to apply low-cycle repeated loads at both ends of the beam. During this process, the column top shaft pressure is always unchanged. Figure 2 shows the loading device. 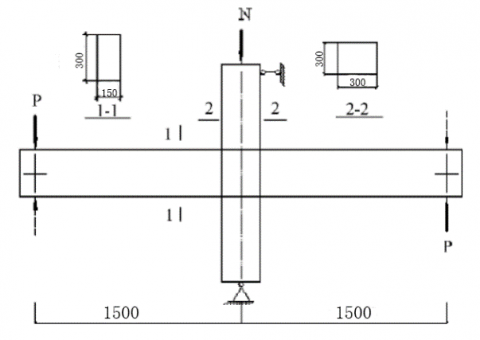 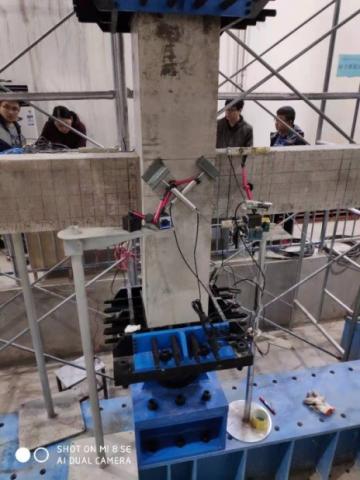 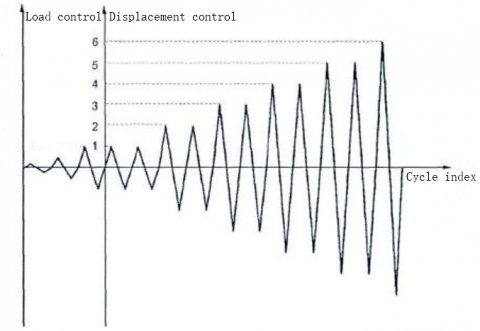 In order to study the deformation of the longitudinal reinforcement and stirrups in the core area and surrounding beam-column, the strain gauges were used to measure the strain. The specific deployment of strain gauges is shown in Figure 4, that is, polish the steel bars and wipe them with alcohol, and fix the welded strain gauge ends with high-grade super glue in the corresponding position; then evenly coat the outer layer with epoxy resin for waterproofing, and sprinkle with fine sand to reduce the effect on the bonding between steel and concrete. 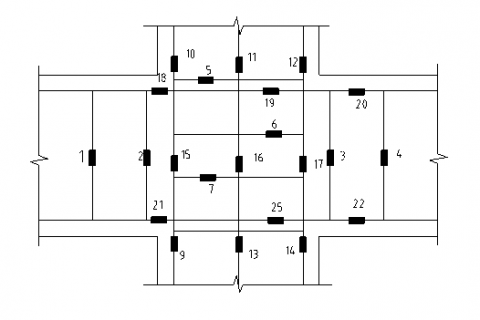 Figure 4. Deployment of the strain gauges on the steel bars

The main experimental results are shown in Table 4. The failure load of the specimens was defined as Pu=0.85Pmax. Figure 5 shows relation curve between fibre dosage and node displacement. 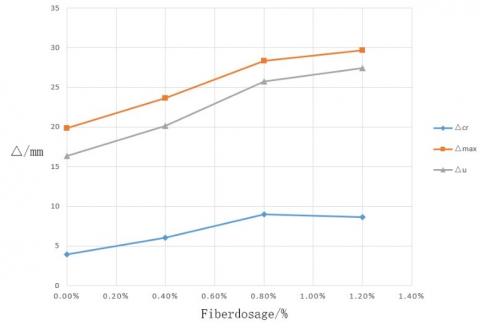 Figure 6 shows the beam-end load-displacement hysteresis curve of the specimens, while Figure 7 shows their skeleton curves. 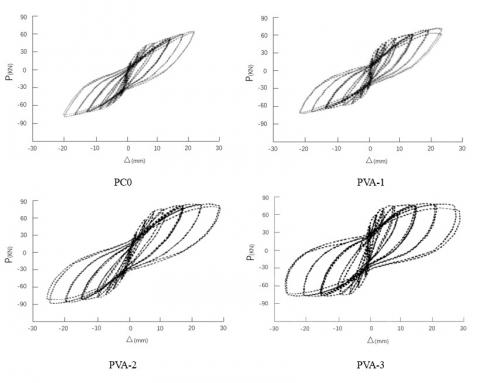 Figure 6. Hysteresis curve of the specimens

From the hysteretic curve, it can be obtained that the specimen is in the elastic stage at the initial stage of loading. The hysteretic curve is full shuttle type and the load and displacement of each specimen are approximately the same. The hysteretic curve of cracked core area is inverted S-shaped. The performance of ordinary concrete joints and PVA reinforced frame joints under reciprocating loads is obviously different. The hysteretic loop shape of ordinary concrete joints is narrower and has obvious pinching phenomenon. The number of cycles that can withstand repeated loads is less, and the stiffness degradation is obvious. The hysteresis loops of the joints with PVA fibres are full and the stiffness degradation is relatively slow.

Comparing the three components with PVA-1, PVA-2 and PVA-3, it is easy to find that the hysteretic curve is plumper with the increase of the content of PVA fibre. When the volume fraction of fibres reaches 1.2 %, the ductility, energy dissipation and strength degradation achieve the best.

Figure 7 shows the skeleton curve of the joints. Each specimen has experienced three stages: elastic growth, elastic-plastic development and failure. 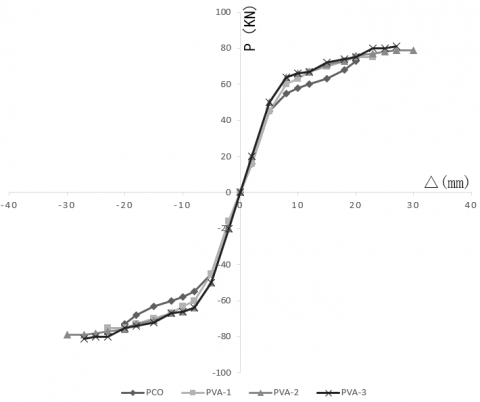 Figure 7. Skeleton curve of the specimens

In terms of structural seismic performance, ductility is an important indicator of the inelastic deformation capacity for the reactive structure, component or material, which is as important as strength. When the earthquake occurs at the intensity higher than the design intensity in the region, due to a great plastic deformation ability in the high ductility structure, the plastic internal force redistribution inside the structure can be generated, so as to consume more energy of the structure, and reduce the probability of structural damage. In this experiment, the displacement ductility coefficient μ was used to reflect the ductility of each member.

Table 5. Ductility coefficients of each member

Table 5 above shows that the displacement ductility coefficients of each member are greater than 3, meeting the ductility requirements of Chinese specifications. In addition, for the components with PVA fibre, the ductility is significantly improved, indicating that the PVA fibre reinforced concrete joint has good energy dissipation and shear resistance.
4. Conclusions and Prospects

(3) The dosage of PVA fibre has a significant effect on the mechanical properties of the member. With the optimal mix ratio, the member shall have the best ductility.

(4) The PVA fibre can improve the bearing capacity of the component slightly, but not obviously.

(5) Compared with ordinary reinforced concrete members, PVA fibre can significantly improve the ductility of the joint members, and replace the stirrups in the joints.

In this paper, the hysteretic curve and ductility performance of reinforced concrete frame joints are analyzed with the change of PVA fibres content under repeated loads. Some rules of ductility are obtained with the change of volume fraction of PVA fibres. This conclusion lays a foundation for the application of PVA fibre reinforced concrete materials in frame joints. However, there still exist the issues as follows to be explored in future:

This experiment only used the fibre dosage as the variable. In the future, the reinforcement ratio in core area and casting range of fibre reinforced concrete etc. can be taken as the variables for further research.

Exploratory experiments on costs can be carried out in the future to explore the most economical reinforcement ratio, casting range and fibre types in a reasonable mix ratio, which will bring more value to practical applications.

[6] Gencoqlu M. (2007). The effects of stirrups and the extents of regions used SFRC in exterior beam-column joints. Structural Engineering and Mechanics 27(2): 223-241