Study on Mechanical Properties of Carburized Layer Based on Nano-Indentation

Study on Mechanical Properties of Carburized Layer Based on Nano-Indentation

Based on CrNi steel as the research object, this paper measured the microscopic parameters such as elastic modulus, hardness based on the nano-indentation apparatus, and established the model describing the relationship between the load-displacement curve and macroscopic stress-strain combined with nano-indentation finite element model and dimension analysis based on the load-displacement curve, and used the purity of the model to verify the accuracy of the model, and calculated the local mechanical performance parameters of the CrNi steel carbon region.

The test material is CrNi steel, and its ingredients are shown in Table 1.

Some of the samples were carburized, followed by quenching process at 860℃ for 30 minutes and low temperature tempering process at 200℃ for 2 hours.

Tensile tests were carried out on standard tensile specimens of uncarburized CrNi steel using the MTS-809 fatigue testing machine, and the stress-strain curves of the steel were obtained, as shown in Figure 1. 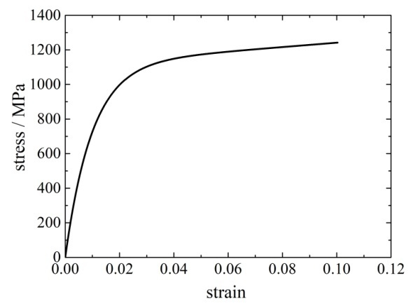 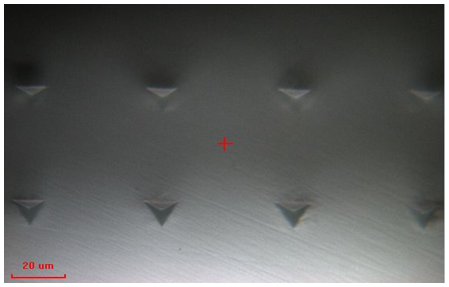 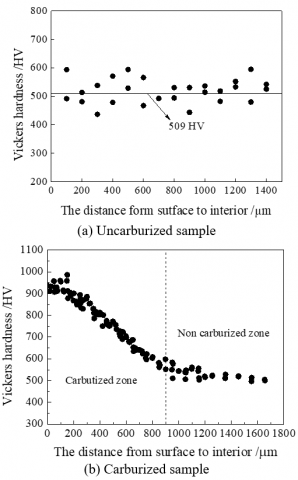 Standard Berkovich indentation head was selected for the nano-indentation experiment. Due to the symmetry of the structure of the pressed material and the load applied by the indentation head, the two-dimensional symmetric model can obtain basically the same simulation results as the three-dimensional model [11]. Therefore, this paper used the symmetric two-dimensional model to simulate the nano-indentation experiment based on the ABAQUS software. Berkovich indenter is equivalent to rigid conical indenter with half angle θ = 70.32°. In addition, the friction coefficient has little influence on the dimensionless function [12], so the friction coefficient between the head and the material is set to 0. The meshing structure of the model is shown in Figure 4.

As shown in Figure 5, the finite element analysis results show that the strain and stress of the material at the tip of the indenter are the highest, and both stress and strain show a trend of gradual decrease from the tip to the nearby. 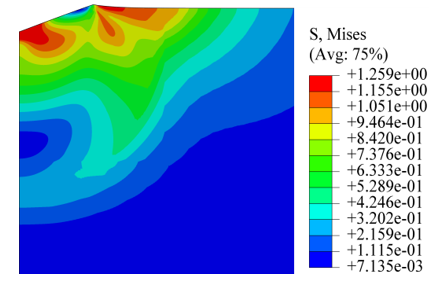 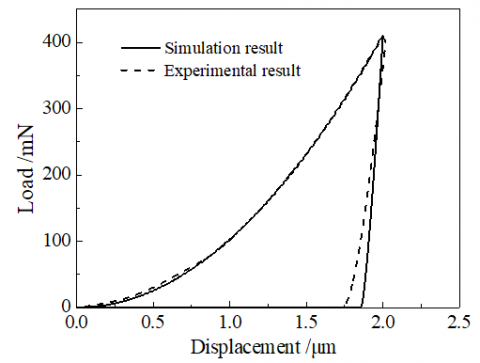 Figure 6. The simulated load-displacement curve is compared with the experimental one

Based on nano-indentation experiment and finite element simulation analysis respectively, comparing the load-displacement curve as shown in Figure 6, the maximum load of the simulation curve is consistent with the experiment, and there is a small error at the end of the unloading curve, but the overall trend is relatively close, it shows that the analysis results of finite element model is relatively accurate.

where, R is the strength coefficient (Mpa), n is the strain hardening index, σy is the yield strength (Mpa), and εp is the plastic strain larger than εy in the total strain. 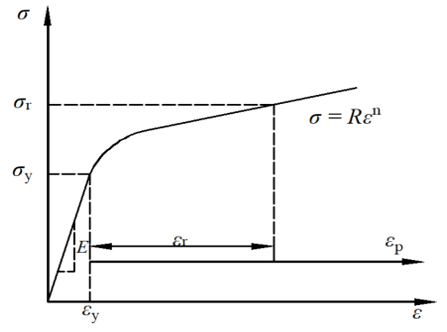 Based on 76 materials with different properties, Dao et al. [5] established a model to reverse the mechanical parameters of materials based on load-displacement curve parameters. In this paper, when determining the model, the combination scheme which is close to the steel property is selected, and the finite element analysis results and dimensional analysis are combined to establish the model of mechanical property parameters of the carburized zone based on the load-displacement curve. The simulation scheme is shown in Table 2.

Table 2. The combination of elastoplastic mechanical parameters selected in this paper

The Mises stress nephogram when σy /E = 0.008571 is shown in Figure 8. It can be found that when n is 0 and 0.1 respectively, there is a large stress concentration phenomenon at the edge of indentation, and the pile-up effect will occur. When n is 0.3 and 0.5 respectively, there is almost no stress concentration at the indentation edge, and the sink-in effect will occur at this time, which is the same as the study of Giannakopoulos [13], that is, in the low-strain-hardening alloy, the incompressibility of the plastic deformation makes the plastically displaced material tend to flow upward (accumulated on the surface of the indenter). The high strain hardening material sinks below the initial surface with the indentation and the plastic deformation area is pushed out of the indentation head. 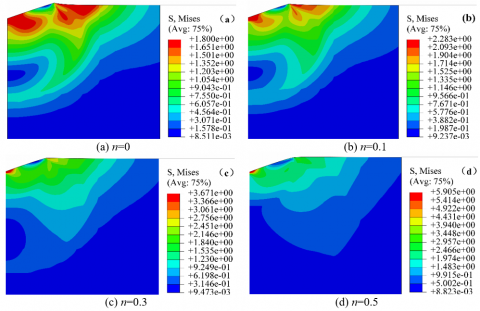 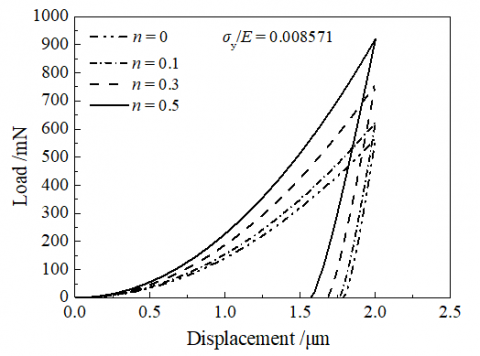 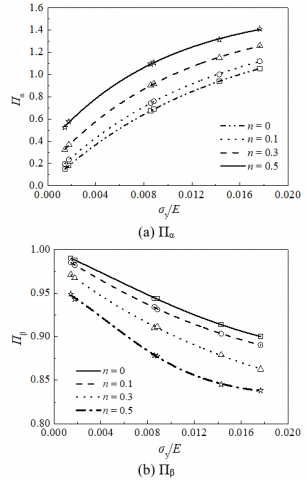 Fit the above data to obtain the following dimensionless function expression:

Eqns. (8) and (9) are the dimensional function model for calculating the mechanical property parameters of the CrNi steel carburizing zone based on the load-displacement curve.

Using the nano-indentation experimental data of pure iron and combining with the above model, the macroscopic mechanical property parameters of pure iron were deduced and compared with the experimental data in literature [14] to verify the accuracy of the model. The yield strength of pure iron based on the model inversion is 310 MPa, and the strain hardening index is 0.196. The stress-strain curve of pure iron is obtained by the elastic-plastic power strengthening law. The load-displacement curve is obtained based on the finite element model simulation, and compared with the indentation test data of pure iron, the results are shown in Figure 11. 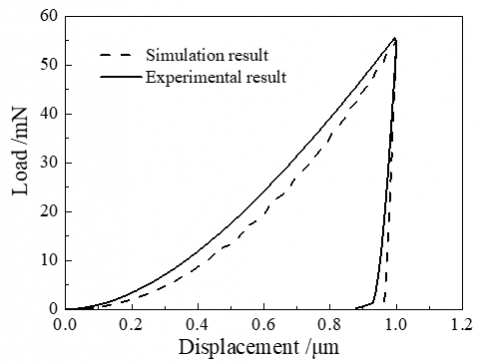 It can be found that in the loading area, the experimental results are slightly higher than the simulation results, but the error is not large, and the maximum loading load is basically the same. The first part of the curve is consistent while there is a small deviation in the second part during unloading. In general, the simulation results are consistent with the experimental results, which indicates the accuracy of the dimensionless function model constructed in this paper is high.

In order to avoid the influence of the dispersion of the nano-indentation test data on the surface of the carburized sample, the parameters of the nano-indentation test data in a local area of 150μm from the surface to the interior were extracted as follows: Fmax = 626.83 mN，S = 1613.30mN/μm，hmax = 1.91μm, hc = 1.63 μm, E = 220 GPa, The dimensionless parameters (Πα, nβ) are calculated.

The mechanical properties of the local area of the carburized layer are obtained by substituting(Πα，Πβ) into equations (8) and (9), i.e., the strain hardening index n = 0.2078 and the yield strength σy = 1774.8 MPa. The uniaxial stress-strain relationship of the carburized layer obeyed Hooke's law in the elastic stage, and the power strengthening exponential model was used in the plastic stage, and the Von Mises yield criterion was followed. The elastoplastic power strengthening stress-strain curve of the local carburized zone at a depth of 150 μm was obtained, as shown in Figure 12. The stress-strain relationship was imported into the finite element model to obtain the simulated load-displacement curve, which was compared with the experimental curve, as shown in Figure 13. 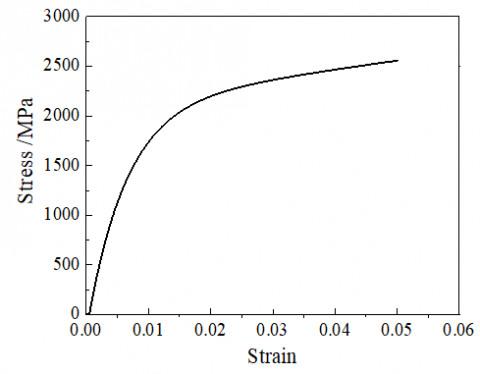 Figure 12. Stress - strain curve of carburized layers at a depth of 150μm 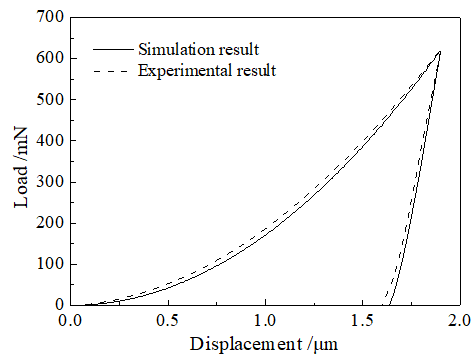 In this paper, CrNi steel was taken as the research object, a dimensional analysis model was established to calculate the local mechanical property parameters of CrNi steel in the carburizing region based on load-displacement curve parameters combined with nano-indentation experiment and finite element analysis. The following conclusions were drawn:

(2) The mechanical property parameters of the carburized region 150μm from the surface were predicted, and the stress-strain curve of the carburized region was given based on the established dimensional analysis model. The load-displacement simulation curve of the region was calculated based on the finite element model, and the simulation curve was in good agreement with the experimental curve. It shows that the prediction results of the model for the local mechanical properties of carburizing are reasonable.

This research was supported by the Natural Science Foundation of Hebei Province (No. E2018201265) and funded by Science and Technology Project of Hebei Education Department (No. QN2017307).