In the DT era, data will become the main source of energy. The job of "big data" is so popular that it is in short supply for a long time. The purpose of this study was to obtain the big data recruitment information in the ocean of Web, Use Python web crawler technology as a tool to crawl at the recruitment website of https://www.lagou.com ,working place as "Hangzhou", the search criteria for the "big data", using the Pandas + Matplotlib to implement data cleansing, data analysis and data visualization in terms of the job seekers' concerns. The results obtained in this study include company size, education, working years, salary, skill requirements, development prospects, position and job benefits, etc. The results of data visualization provide reference for interested practitioners, but also provide colleges and universities with talent training direction.

Mankind is moving from the IT (Information Technology) era to the DT (Data Technology) era [1], big data has been hailed as a new driving force for development in the 21st century. China has proposed to accelerate the implementation of the national big data strategy. In the case of continuously raising of the requirements of big data, however, talent for big data is in short supply, there are many online recruitment website, for instance, 51job.com [2], ChinaHR, Zhaopin.com [3], www.lagou.com, these websites have become the carrier of a large amount of recruitment information. In the ocean of Web, ﬁnding information is like ﬁnding a needle in the haystack [4]. The search engine is used to ﬁnd information on the Web. Search engines can be of two types—crawler based and traditional search engines. In a traditional search engine, results are affected by human intervention, for example, users from different fields and backgrounds often have different search purposes and needs, while the results returned by traditional search engines often contain a large number of pages that users do not care about. On the other hand, crawler-based search engines do not have this problem. In order to solve such problems, crawler technology emerges as a result [5-8]. A Web Crawler, also known as a Web Spider [9], is a program that makes a request to a website, obtains resources, analyzes them and extracts useful data. Technically speaking, it is to simulate the behavior of the browser to request the site through the program, crawl the HTML code /JSON data/binary data (pictures, videos) returned by the site to the local area, and then extract the required data and store it for use [10]. www.lagou.com is a vertical recruitment platform of the internet industry in China, Hangzhou is known as a capital of the internet, the demand of "big data" is representative, so this study selects crawl www.lagou.com with the workplace for "Hangzhou", position name for "big data", use Python third-party libraries to develop, use web crawler technology to collect recruitment information rapidly and accurately. Obtain the information as follows: the name of the company, the company size, education, working years, salary, skill requirements, development prospects, position and job benefits, etc., and finally save the data into Excel spreadsheet for later data analysis and visualization display [11]. These visualizations are visual, the results can provide reference for the interested practitioners, and also can provide reference for the direction of talent training in colleges and universities, so as to produce a batch of talents more suitable for the society and workplace.

The remainder of this paper is organized as follows: Section 2 introduces about web crawler technology, Section 3 describes the architecture of the system, and the design and implementation of recruitment data crawler using Python are presented in Section 4. Section 5 describes data analysis and data visualization. The conclusions and future work are given in Section 6.

A mere basic Web crawler is a function with a set of seed URLs as input and a set of crawled webpages as output. This simple function takes URL one by one, gets the webpage, and adds URLs found on this webpage to the list of URLs to be visited further. The architecture of simple crawler technology is shown in Figure 1, which is mainly composed of four aspects: Crawler scheduler, URL Management, Web downloader, Web parser [12].

(1) Crawler scheduler: the entrance of the program, mainly responsible for the control of the crawler.

(2) URL Management: Mainly responsible for extracting the URL address of the web crawler.

(3) Web page loader: fetching the contents of a web page based on the URL by the implementation of urllib2 and request.

The data in this article is obtained from www.lagou.com by web crawler, using Pandas+ Matplotlib for data scrubbing, data analysis and visualization. Pandas are the Python's core library for data analysis. Matplotlib is a graphics library written in Python language [13] that can easily draw various statistical graphs, such as scatter graphs, bar charts, line graphs, etc. The result of processing analysis needs to be made into visual graphics with obvious effects. This paper is using the version of Python3.6 and the overall architecture of the system is illustrated in Figure 2.

Figure 2. Architecture of the system

The first thing the crawler needs to do is to get the link address to be crawled, then the position information in the link address gets parsed effectively and then is saved in the file of Excel form.

4.1 The crawling process of job information of www.lagou.com

(1) Define the destination page address to be crawled 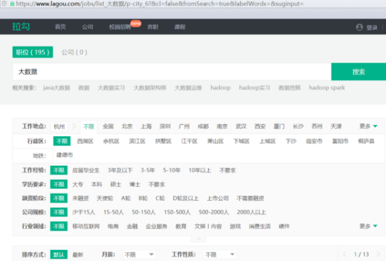 Here's how: The Chrome browser are used to open the browser and go to www.lagou.com home page, search for the position- "big data”, workplace- “Hangzhou”, as the Figure 3 shows, press F12 on the keyboard to enter developer mode, so we can see the HTML file contents of the page. 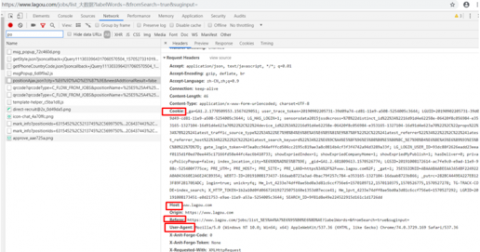 The above information as Referer, User-Agent should be added to the crawler Function to the Headers. The program is shown in Figure 5.

(4) Define the Form Data information used to query including the job title to be crawled. As shows in Figure 6 below.

Figure 6. The information of Form Data

(5) Take the random time as the interval, get the cookie information [14], define the current crawl page in the Form Data, and whether the current is the first page, etc., call requests.post() to make a request to the www.lagou.com server.

(6) Each time a page result is fetched, the json() method of the result object is called to convert it to a dictionary for the object's type. Observe the JSON data, where the selected key names are ‘companyShortName’, ‘companySize’, ‘education’, ‘workYear’, ‘positionName’, ‘positionAdvantage’, ‘skillLables’, ‘salary’, ‘financeStage’, ‘district’. Program code for crawling position information is shown in Figure 7. 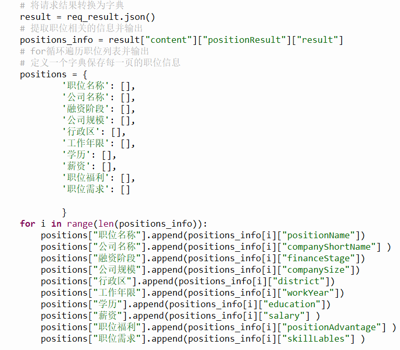 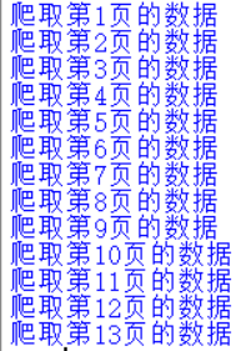 Figure 8. The results of Crawls program 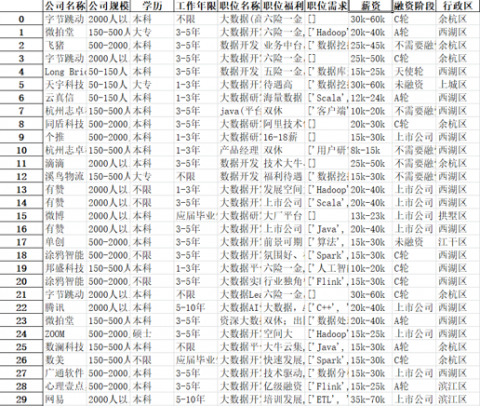 Figure 9. Part of the results of the crawler data saved

"Salary" processing: since the salary of the same position on the website is not a fixed value, but a range value [15], to facilitate mathematical analysis, a program is written to add two columns, that is maximum salary and minimum salary, the code is as follows:

In this part, the key data exported from the lagou.com are made into visual graphs by using the third party libraries of Python, such as Matplotlib [16]. Then import the pyplot plotting module from the Matplotlib library to draw various statistical graphs [17].

Since the salary of position on the website is not a fixed value, but a range value. The mean value of the maximum and minimum salary is taken as the average salary of the position for mathematical analysis. 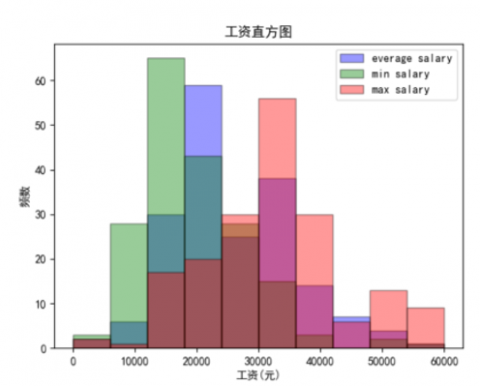 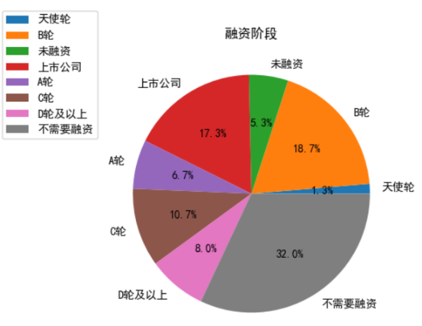 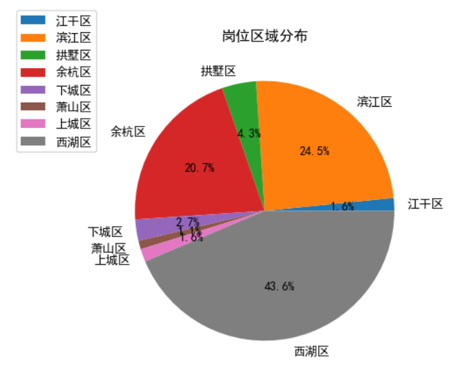 Education required: bachelor’s degree, master's degree, junior college degree and without limitation. As can be seen from Figure 13, the proportion of applicants with bachelor's degree is the highest, accounts for 77.7%. It may be that undergraduates have a good foundation in statistics, advanced mathematics and linear algebra; they have good algorithm and data analysis thinking. The second is junior college, accounting for nearly 9.0%. It can be seen that bachelor's degree and junior college degree can meet the vast majority of job requirements in the market, and the requirement for applicants for master's degree or above accounted for a relatively low number of enterprises, only 3.7%. Further analysis of the original data shows that the positions requiring a master's degree or above are mainly algorithm engineer and data mining that requires higher mathematics. Perhaps due to the Internet industry nature of the recruitment website, the education requirement of Ph.D are not shown here, such talents are more likely to be poached by means of headhunters, internal promotion, etc., rather than published on the recruitment website. 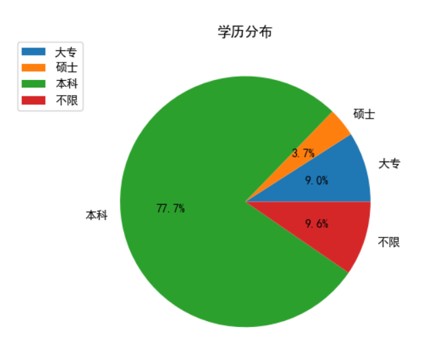 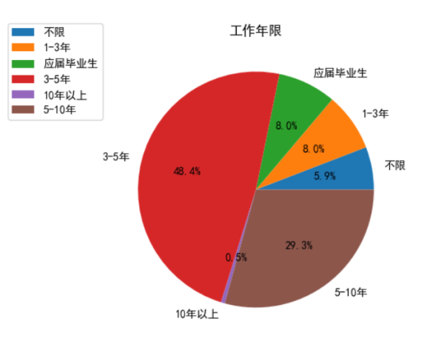 As can be seen from Figure 14, the positions requiring 3-5 year of work years are the most, accounting for 48.4%, while those requiring 5-10-year work years account for 29.3%. Working years of 1-3-year is required, accounting for 8.0%; the proportion of new graduates and those with unlimited working years account for 8.0% and 5.9% respectively. It can be seen that the job market is in great demand for talents with certain working experience and ability to work independently or to leading a team. The demand for less than one year's working experience also indicates that this industry has a certain talent deficit. 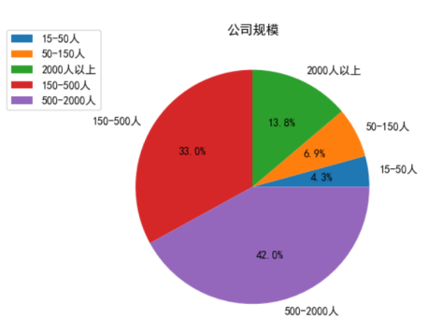 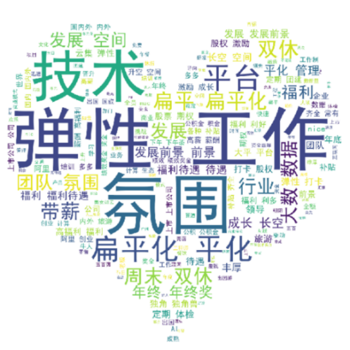 It can be seen that flexible work, working atmosphere, platform, paid vacation, team, double vacation, equity incentive and training appear relatively frequently in the job benefits. Job seekers can judge whether they can accept the job according to the benefits of the position, and at the same time, they can grasp what the position can bring to them. 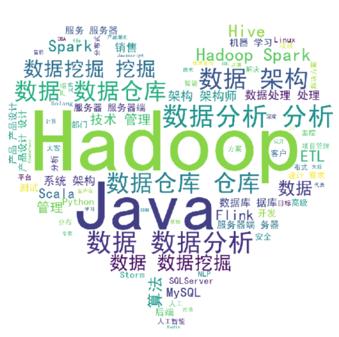 This shows that the main skills of big data are required to be proficient in Java technology and familiar with Spark, kafka, Hive, HBase, etc.; be familiar with Hadoop distributed system architecture, ETL, SQL database language, data warehouse, machine learning, etc. The company will give priority attention to these who have experience in data visualization, data analysis and mathematical modeling. Job seekers can prepare these relevant knowledge and skills so as to improve the fitness with occupational requirements and enhance their competitiveness. Colleges and universities can change talent training direction according to this. 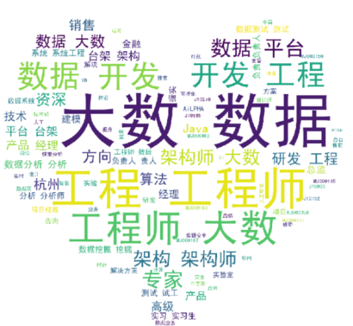 This paper introduces the crawl process of web crawler to obtain recruitment information taking www.lagou.com for example, provide more comprehensive analysis on many aspects which job seekers care much for “big data” position, shows the operation process including data scrubbing, data analysis, data visualization, offer some reference for the majority of interested applicants, reduce the asymmetry of information, make search for jobs more efficiently and more closely match, this paper laid a certain foundation for future research work, the future work should be improved according to the following deviations.

1. The limitation of sample size may cause errors to the analysis results because of only 183 samples;

2. This paper crawl the recruitment information of www.langou.com only for the Internet industry, actually, other industries also have demands for big data talents, which may lead to incomplete information.

This paper is sponsored by Project No. 2018dfy006 of the key projects of School of Dongfang, Zhejiang University of Finance and Economics.