LiFePO4 has been widely used as cathode materials for lithium-ion battery with the development of electric vehicles and energy storage, which will cause a large quantities of spent batteries. Recycling of spent lithium-ion batteries can not only reduce impact on environment, while also bring some economic benefits. In this paper, parameters of recycling process were studied. The results showed that leaching efficiency of Iron ion was controlled by simultaneous interface chemical and surface diffusion reaction. The discharge specific capacities of resynthesized LiFePO4/C at 0.1C, 1C, 2C, 5C and 10C were 151.4, 141, 139.8, 132.4 and 115.6 mAh/g, respectively.

In general, recycling of spent LIBs mainly focus on cathode materi- al. At present, there are many kinds of recycling methods, which are broadly divided into the following processes: disassemble batteries, separate cathode material and current collector, recovery and reuse of valuable metals, etc. [9-10]. Leaching and extraction are essential to recover metal ions effectively from cathode material, which is consid- ered as the most important fraction of LIBs. Separation and purifica- tion process mainly include chemical precipitation method, solvent extraction method and electrochemical method. Chemical precipitation method need to add specific precipitant to leachate and control the pH of solution to precipitate metal ions for obtaining metal compound product [11]. However, it is inevitable that some ions will co- precipitate during the precipitation process, resulting in impurities of the finally obtained precipitated product. Furthermore most research focus on recovery process parameters, rarely on the reuse of recovered product and analysis on corresponding mechanism.

In this paper, we demonstrate an efficient recycling process by re- covering iron and phosphorus selectively and regenerating FePO4 and LiFePO4 successfully. The parameters of separating cathode material from aluminum foil, leaching process, leaching kinetics and properties of regenerated FePO4 and LiFePO4 were studied.

Spent LiFePO4 batteries were collected by our lab. First, batteries were discharged by immersing in 5wt% sodium chloride solution to avoid self-ignition and short-circuiting. Then dismantled the batteries and separated into cathode scraps, anodes scraps, plastic separators  and metal cases. All reagents were analytical grade and all solutions were prepared with deionized water.

The cathode scraps were cut into small pieces and dissolved in alka- line solution with ultrasound-assisted dissolution to separate the cath- ode material from aluminum foil. The leaching efficiencies of alumi- num foil under factors including reaction temperature, concentration of alkaline, reaction time, solid-to-liquid ratio (S/L, cathode scraps to alkaline solution, g/L) were studied. The cathode material was collect- ed by filtration and it was subsequently calcined in air at 600 °C for 1h to burn off organics and conductive agent. Harmful gases were man- aged by an exhaust gas-recovery unit during the calcination process. The leaching experiments were performed in a 500 mL three-necked round bottom flask, which was installed with a reflux condenser. A heating bath with magnetic stirrer was used to ensure optimized kinet- ics condition and temperature control. During the experiments, a cer- tain amount of filter residue was added into a 250 mL mixed solution including sulfuric acid (H2SO4) as a leaching solution and hydrogen peroxide (H2O2) as a reductant. The leaching efficiencies of Fe and P under factors including temperature, concentration, reaction time, sol- id-to-liquid ratio (S/L, filter residue to mixed solution, g/L), the vol- ume ratio of leachate to reductant agent (H2SO4/H2O2 (v/v), L/L) were considered.

After leaching, the leachate which contained Fe3+ and P5+ was ana- lyzed and adjusted to molar ratio of 1:1. Then NH3·H2O was added to the leachate to adjust pH value and regenerated FePO4 precursor was obtained, which was filtered, washed, dried, and calcined. Finally FePO4 precursor was mixed with Li2CO3 and carbon sources to resyn- thesize LiFePO4/C cathode material.

In summary, aluminum foil could be completely separated under the optimized condition: concentration of alkaline was 1mol/L, temperature was 60°C, reaction time was 80min and S/L was 30g/L.

After the aluminum foil was completely dissolved, the cathode mate- rial was collected by filtration, washed several times with deionized water and dried it was subsequently calcined in air at 600 °C for 1 h to burn off organics and conductive agent. The filtrated residue was added into mixed solution including H2SO4/H2O2 as a leaching solution. After reacting for a preset period, the mixture (leachate and reaction residue) was filtered immediately. During leaching experiments, the effects of a range of factors including temperature, concentration of acid, solid-to- liquid ratio (S/L, filtrated residue to mixed solution, g/L) and the vol- ume ratio of leachate to reductant agent (H2SO4/H2O2 (v/v), L/L) were considered. The leaching efficiency of Fe3+, P5+ and molar ratio of Fe/P under each reaction condition were shown in Fig.2. 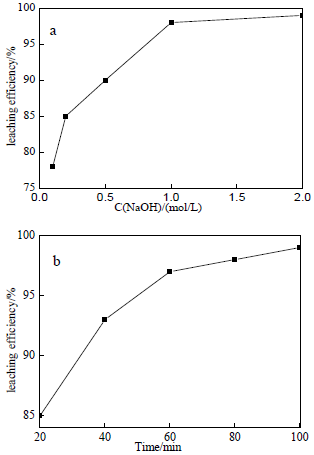 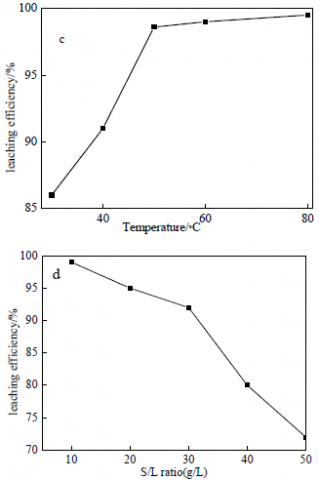 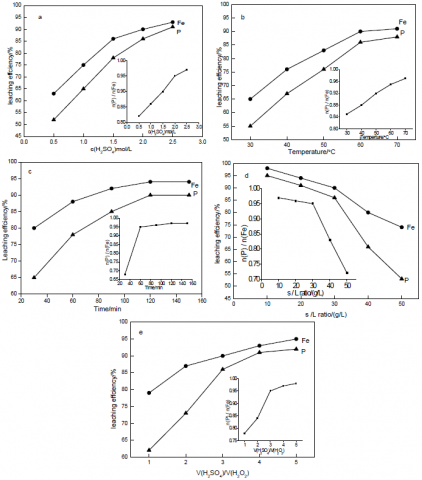 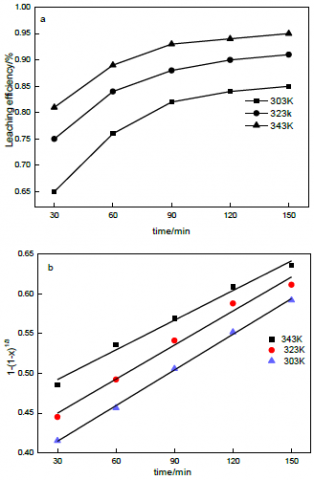 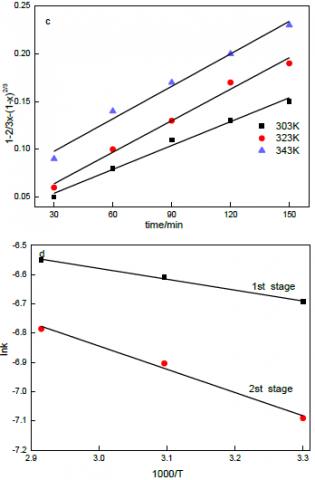 In summary, filtered residue was then dissolved in the following solution: concentration of acid was 2 mol/L, reaction temperature was 60 °C and reaction time was 80 min, S/L was 30 g/L ,and volume ratio (H2SO4 /H2O2, v/v) was 4.

To determine the most probable mechanisms involved in the leach- ing of spent LiFePO4 using the electrochemical cathode reduction method [12,13], kinetics analysis was carried out at various tempera- tures and leaching durations under concentration of acid was 2 mol/L, volume ratio H2SO4/H2O was 4, S/L was 30 g/L .

Based on the characteristics of the leaching process, the leaching of single particle of spent LiFePO4 involves the following steps [14, 15]: (1) diffusion of reactive ions within the liquid film, (2) diffusion of reactive ions through the product layer of the particle up to the surface of the inner core, (3) chemical reaction at the surface of the inner core. According to previous studies, the surface chemical reaction model (Eq. (1)) and the diffusion control model (Eq. (2)) can be applied to analysis the control mechanism of the leaching process. The two mod- els are presented as follows:

Where x is the fraction of the leaching efficiency, k1 and k2 are the rate constants of the control model, and t (min) is the leaching time.

As shown in Fig. 3(a), the leaching of the spent LiFePO4 can be di-vided into two stages: the first stage was for 30-90 min, and the second stage was for 90 -150 min. We fitted the leaching data of the two stages based on the above models. It was clear that Eq. (1) (surface chemical reaction control) and Eq. (2) (diffusion control) exhibit the best fitting relevance for the first stage (Fig. 3(b)) and second stage (Fig. 3(c)), respectively. This indicates that the leaching of Fe is controlled by a surface chemical reaction within a leaching time of 90 min. Thereafter, the leaching process may be controlled by the diffusion of reactive ions. To explain clearly the control mechanism, the apparent activation energy was calculated using the empirical Arrhenius law (Eq. (3)):

Where k is the rate constants, R is the gas constant (8.314 J/K·mol ), A is the preexponential factor, and Ea is the apparent activation energy.

By plotting lnk vs. 1000/T in Fig. 3(d) and Table 1, the apparent activation energy of the two stages can be obtained as 74.72 kJ/mol and 11.65 kJ/mol, respectively. This implies that the leaching of Fe at the second stage was controlled by a combination of the surface chemical reaction and diffusion [16, 17]. 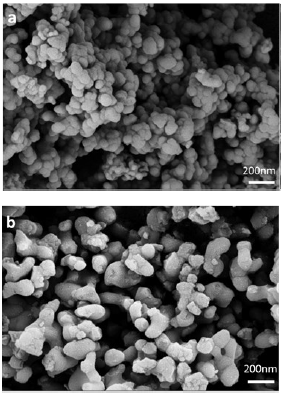 Figure 4. The SEM images of resynthesized FePO4 and LiFePO4/C 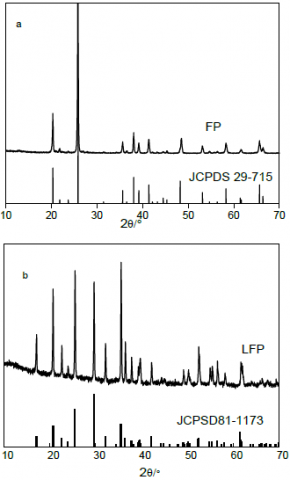 Figure 5. The XRD patterns of resynthesized FePO4 and LiFePO4/C 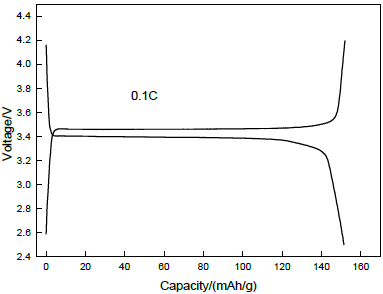 The XRD patterns of resynthesized FePO4 and LiFePO4/C cathode material are shown in Fig.6. All diffraction peaks of resynthesized FePO4 can be indexed to pure FePO4 with an orthorhombic olivine-type structure (JCPDS card no.29-715). Resynthesized LiFePO4/C cathode material could be indexed to pure LiFePO4 with an orthorhombic oli- vine-type structure (JCPDS card no. 81-1173). The strong diffraction peaks in the pattern suggest a perfect crystallinity of the synthesized materials with no impurities. 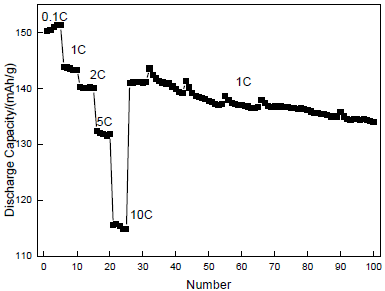 The resynthesized LiFePO4/C material showed excellent high-rate capability and good cycle performance, which is displayed in fig.7. The discharge specific capacities of this prepared LiFePO4/C can stabilize at 151.4, 141, 139.8, 132.4 and 115.6 mAh/g at high rates of 0.1C, 1C, 2C, 5C and 10C, respectively. The discharge capacity can still retain 134 mAh/g after 100 cycles at 1C and the capacity retention is 95%.The results indicated that resynthesized LiFePO4/C cathode mate- rial has low polarization and good electrical conductivity.

With comprehensive investigation and evaluation of the recovery process of LiFePO4 from spent LiFePO4 batteries, conclusion can be drawn as follows: