Nowadays, the matrix converter (MC) has become the prominent power converter. Its unique qualities like single-stage ac to ac conversion, bidirectional power flow, sinusoidal response, unity power factor, and no need for dc-link makes it superior among all power converters. This archival literature investigates the various pulse width modulation (PWM) methods and proposed a novel pulse width modulation (PWM) method named Time Equivalent space vector pulse width modulation. In this article this novel modulation method is compared with exiting carrier-based pulse width control and space vector control methods for a 3 phase to 3 phase matrix converters. Simulation model is built in Matlab and comparative analysis based on total harmonic distortion (THD) will be given for different methods. Simulation results revealed that total harmonic distortion (THD) of Time Equivalent space vector PWM is least so this novel method is best and more efficient in comparison to others.

To overcome the drawbacks of traditional back-to-back converters the researchers are working on a new converter topology called matrix converter (MC). The most attractive features of matrix converter which overcome the drawbacks of the traditional back-to-back converters are given as following: No need for an energy storage element, the waveform of input and output is pure sinusoidal, unity input power factor, harmonics content is very low, and single-stage energy conversion. These all features of matrix converter forced the researchers to work on it so that efficiency of the power converter can be maximized.

The first time this AC to AC converter called matrix converter was introduced by Gyugi and Pelly in 1976 [1]. Then matrix converter came with a power transistor in 1978 [2]. In the era of (the 1980s), there was a huge work done in the field of matrix converter by Venturini and Alesina [3, 4]. A matrix converter is made of a different combination of bidirectional switches, with the help of these switches power conversion takes place in a single-stage without any energy storage element. 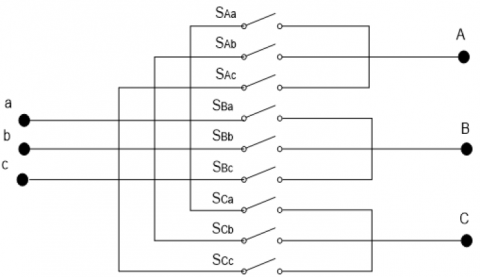 In this article, the author discusses about different PWM schemes of power conversion. After that, authors’ presented a novel PWM scheme named Time Equivalent space vector PWM method for three phase to three phase matrix converter. A simulation model is built in MatLab for novel Time Equivalent space vector PWM. Its simulation results are compared with others PWM schemes which shows that this novel method gives least THD. Thus, it is best and more efficient. There is a wide future scope of this novel method in wind power plants. This method with matrix converter can be used in wind power plants where output AC power from wind plants can be given to the AC grid in single stage more effectively [8, 9].

Among all switching techniques, the pulse width modulation is the most basic control technique used for power conversion in various power converters. The main object of any switching scheme is to generate variable frequency, voltage, and current at the output. In this section, different PWM techniques will be explained for a 3-phase matrix converter. Among which carrier-based PWM and space vector PWM is already existing and time equivalent space vector PWM is proposed in this paper. The schemes covered in this are (1) Carrier-based sinusoidal PWM scheme, (2) Space vector PWM scheme, and (3) Proposed Time equivalent space vector pulse width modulation scheme.

The relationship of input-output voltage and current for a three-phase to three-phase matrix converter can be written as given in the following equations where VA, VB, and VC denotes output voltages and Va, Vb and Vc denotes the input voltages. Duty ratios are represented by day .... etc.

By using the same process signals for the switches in the other two legs can be produced. To produce the PWM signal d aA and d aA+d bA are compared by the carrier signal similarly the switching signal for the third switch are obtained by applying the same logic. The switching sequence, which is the order in which the three input phase voltages are connected to the output load, is a-b-c-b-a [10]. 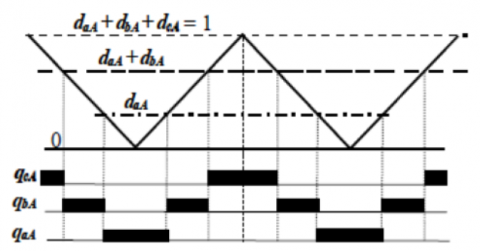 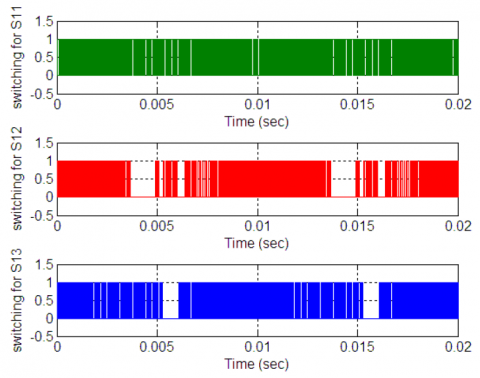 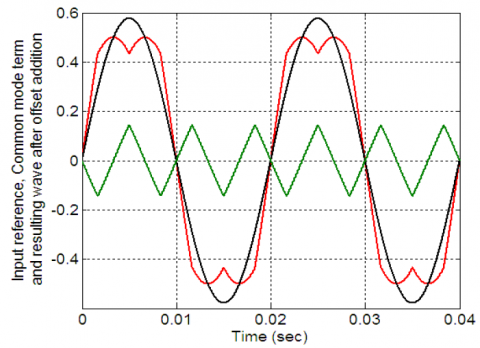 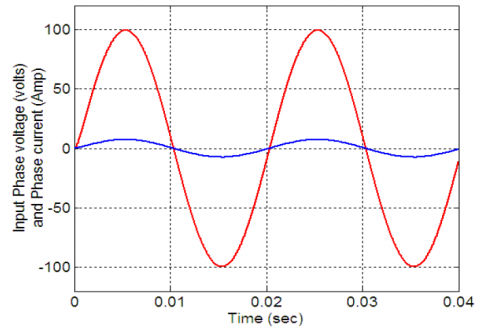 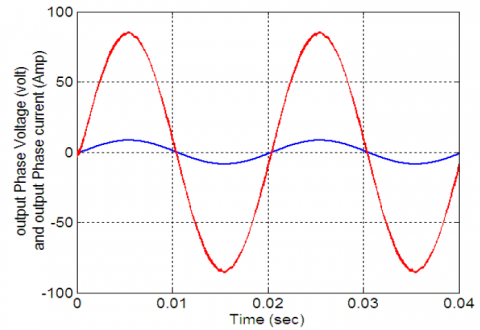 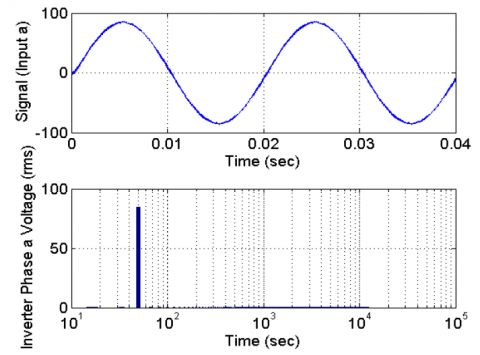 Figure 7. Harmonics view in phase ‘a’ filtered voltage at the output side

Above Figure 7 indicate the harmonics view of the voltage at the output side for phase ‘a’. The harmonics analysis indicates that voltage at the output side has a fundamental ingredient having a frequency of 50 Hz and its magnitude is 84.6 volt which is the peak value. Its total harmonic distortion (THD) value is 0.67% and the weighted total harmonic distortion (WTHD) value is 0.47%. These values indicate that the nature of output is perfectly sine wave.

The SVPWM has a great place among all other modulation methods since it decreases the count of commutations by efficient use of input voltage, also it can maintain input power factor in a good range so that the grade of electrical power remains best [11, 12]. According to the space vector illustration, the SVM produces the required reference signal by taking the resultant of two adjoining vectors and the vectors having zero state [13]. This method has the potential to generalize the switching problem of matrix converters.

Matrix converters have two types of configurations which are direct type and indirect type. Direct SVM has the advantages of easy implementation and simple switching process also it does not have DC-link [14].

The indirect method can control the load side frequency, the magnitude of input side current as well as the power factor of the input side [7, 15]. In this method, we can interconnect the switching process of both the stages inverter side and rectifier side so it is possible here to consider both sides at the same time [16]. In Figure 8 the practical results are shown for SVM of indirect matrix converters. In Figure 8(a) the matrix converter input waveform of V and I and Figure 8(b) the waveform of output-side I am shown. Also, it shows that in the SVM method the waveforms of current and voltages are pure sine waves. 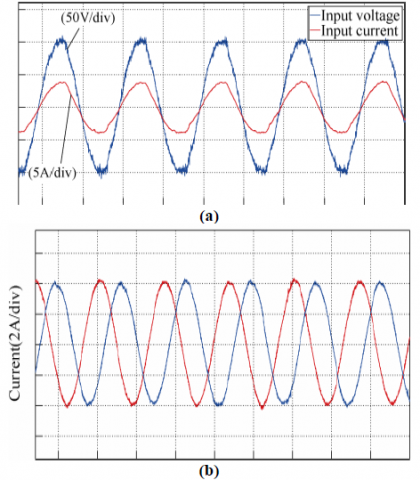 In this paper, a new modulation method called time equivalent space vector PWM [17] is implemented in a three-phase to three-phase matrix converter.

In this method switching signal for each converter, the leg is produced by utilizing the sampled reference voltages to produce sine wave output. The sampling of the reference voltage is done at a finite time which should be equivalent to the switching span.

After the sampling process, the voltage magnitude is transformed into an equivalent time signal. Each converter leg switching span is found out by summing the offset time to these signals. By adding offset centralizing of operative switching signals inside the switching span is done. The procedure of proposed time equivalent space vector PWM is stated stepwise.

I. Firstly Sampling of reference phasevoltages Va, Vb & Vc, is done for each switching span Ts.

IV. In the fourth step the converter leg switching times are calculated by Tgx=Tx+Toffset; x=a, b and c.

Figure 11 is showing the output phase voltage using the time equivalent modulation method in a three-phase to three-phase matrix converter and Figure 12 is showing the THD (Total harmonic distortion) which is very low in comparison to other methods. 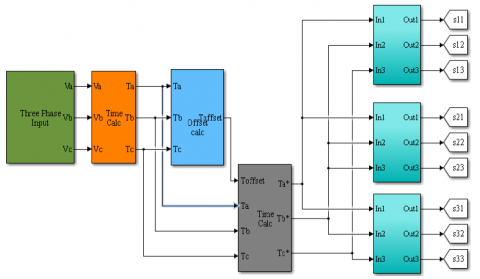 Figure 10. The subsystem of the Simulation model of proposed time equivalent modulation scheme 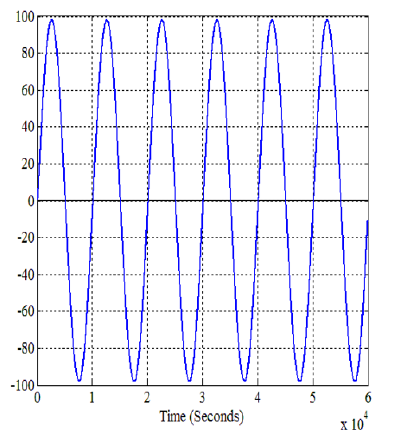 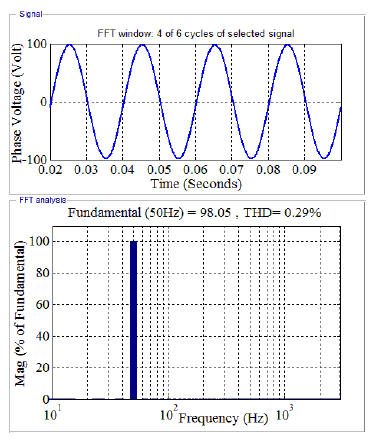 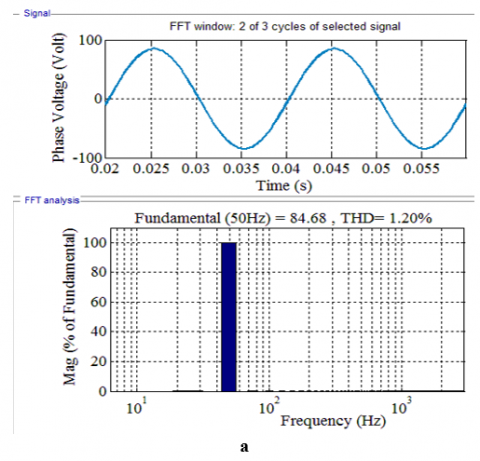 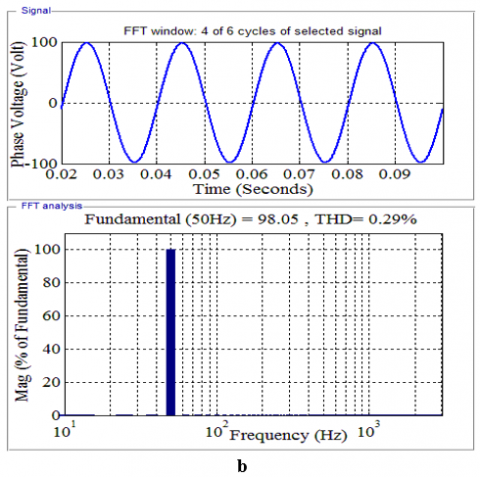 Matrix converter is a single-stage AC to AC converter so it has a huge scope of research as compared to other converters. In this paper advantages of matrix converters over traditional two-stage ac to ac, converters can be seen in various modulation schemes. Since MCs do not need a DC-link structure so the efficiency of these converters is much more and also the size of the converter becomes compact. This paper reviews the various research works on MCs and their various control methods with recent developments. Various modulation schemes are covered and compared with their performances.