Simulation of Computational Fluid Dynamic is applied to present the thermal performance of water-based Yttrium oxide nanofluid in subchannel of pressurized water reactor (PWR) system. Thermal hydraulic aspect such as pressure drop and heat transfer are estimated in typical conditions of pressurized water with flow rates ranged (20×103≤Re≤80×103) using fresh water (0 %vol.) and different volume fraction of water-Yttrium oxide nanofluid (2 and 4% vol.) as coolant fluid. Results were obtained and compared with correlations of single-phase pressure drop and convective heat transfer for the case of fully developed turbulent flow. The addition of Yttrium oxide nanoparticles to the coolant fluid in pressurized water reactor led to increase in convective heat transfer coefficient and pressure drop. Increasing the nanoparticle volume fraction of (2 and 4% vol.) causing an increase in the average Nu by 3.46% and 7.61%, respectively. The CFD model established in ANSYS software was validated by comparing the pressure drop of CFD results with Blasius correlation and Nu with Ma¨ıga et al. correlation and gave a good agreement.

The thermal performance of coolant fluid used for cooling the fuel rod bundles (shown in Figure 1) of the pressurized water reactor is very important for the design and safe operation viewpoint. In such type of nuclear reactor, controlling of pressure and fluid temperature are of the priority for safety operation. For instance, a spot with high temperature in the cladding of fuel rod is considered as danger case. The most common nuclear reactors that use water as coolant fluid are the pressurized water reactor. The boiling point of the coolant fluid in these reactors is high due to the high-water pressure, and the fluid is always in liquid phase [1]. The important duty of the nuclear power plant is increasing the heat output from the reactor core by increasing the temperature of coolant fluid in the reactor core outlet. Some types of nanoparticles be with high thermal conductivity which be useful for enhancing heating capacity of the reactor coolant fluid. Base fluids can be replaced by nanofluid which are a good choice for improving the thermal performance of the nuclear power plant [2].

Previous studies indicate that increasing the nanoparticles concentration in the base fluid enhances both the thermal conductivity and heat transfer [2, 3]. Using nanofluid as coolant in the nuclear reactor will rises the critical heat flux, which leads to enhance the removal from nucleate boiling ratio of the coolant fluid [4-6].

Conner et al. [7] used a computational fluid dynamic scheme to simulate single-phase fluid with steady state conditions in the pressurized water reactor fuel rod assembly and achieved tests to validate the results. The numerical results were compared with the experimental and found that the computational fluid dynamic model is appropriate for estimating the behavior of coolant fluid in PWR fuel rod assembly. Kamal and Zahra [8] used silver oxide nanofluid as enhancer of a twin heat transfer and controlling the surplus reactivity in VVER-1000 which be a type of pressurized water. The coolant fluid in the first loop of this type of reactor is replaced by nanofluid to act as neutron moderator, neutron absorber, and coolant fluid. The volume fraction of 2% is found to suitable for both thermohydraulics and neutronics safety of the VVER-1000 nuclear power reactor. Abdellahoum et al. [9] performed CFD analysis for turbulent forced convection of water-based (Cu, CuO, Ag and Al2O3) nanofluid over heated cavity in horizontal duct test section. The analysis is carried out using ANSYS software ver. 14.0 code. The increase in volume fraction of nanoparticles increases the average Nusselt number for the tested range of Reynolds number. Moghadassiet et al. [10] achieved computational fluid dynamic modeling on horizontal tube of circular cross section to study the effect of volume fraction of nanoparticles on heat transfer of laminar forced convection. They used water-based Al2O3 and Al2O3-Cu hybrid nanofluid with volume fraction of 0.1%. this hybrid nanofluid gave higher convective heat transfer coefficient. Ghulam et al. [11] presented a comparative study of flow velocity, pressure, moderator temperature, fuel temperature at the fuel pin cell, and moderator density of pressurized water reactor. The thermal performance is depended on mass and enthalpy equation of the coolant/moderator with one group diffusion equation of the fuel pin. Sierchula [12] studied in separate the passive containment cooling system and passive residual heat removal system for the nuclear power plant. The outcome of this study is simulating, presenting and describing some of the most important parameters in the nuclear power plant such as reactor coolant temperature and heat transfer. Bikash Poudel et al. [13] performed simplified dynamic model of integral pressurized water reactor type, to estimate the supporting of the nuclear reactor to the dynamics of power plant system. This model is engaged with the modified turbine system and a resulted power system is simulated according to the processes of heat generation and heat transfer based on point kinetic and primary coolant. The responses of power system and internal reactor are when applying electrical demand of 20% electrical output with 80% of valve opening rate.

This paper presents the heat transfer enhancement in the suchannel geometry of the pressurized water reactor system using water-based Yttrium oxide nanofluid and validate the CFD results with the correlations available in the literature. 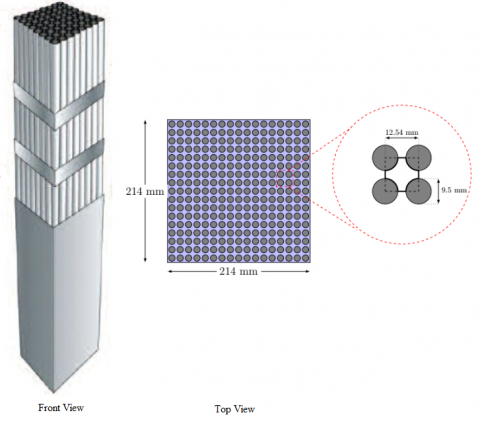 The coolant water in the pressurized water reactor flowing in parallel to the fuel rod bundle, the unit channel is known as subchannel. Modelling this subchannel was made extensively before using the flow symmetry modelling [14-18]. FLUENT 16.0 is used to solve the steady-state Reynolds-Averaged Navier-Stokes, energy, mass, and turbulent equations. The continuity, momentum, and energy equations are listed in Eqns. (1-3) [18]:

The coolant water enters the subchannel with uniform temperature of 293 K and different velocity values. The velocity of the inlet coolant water was applied with different values, which are listed in Table 1). The available correlations were chosen to validate the CFD model Reynolds number and thermal boundary conditions [19]. A relative average pressure equaling zero was defined the outlet of the computational model. The surfaces of fuel rod were assumed to be smooth. Applying constant heat flux of 584 KW/m2 on the outer fuel rod surface. Bianco et al. formula [15, 20-22] based on thermophysical properties of the nanofluid with different volume fractions of 2 and 4% vol. at room temperature has been chosen to estimate the Reynolds number (Re = (ρ·v·Dh)/μ). Assumption of this work can be summarized as: steady state condition, constant heat flux, incompressible fluid, Newtonian fluid, and turbulent flow.

In practical applications, nanofluids contain the oxide particles with finer size up to 40 nm [15]. In the present work the used nanofluids is water contained nanoparticles of Y2O3 with mean particle size of 40 nm. In order to estimate the density, heat capacity, dynamic viscosity, and thermal conductivity of water-based nanofluids, it will be needed to use the following equations [14, 20-24],

The thermophysical properties of water-based nanofluid and Y2O3 nanoparticle are listed in Tables 2 and 3, respectively.

The influence of mesh size on the sensitivity of results must be studied for the first step of accomplishing a CFD simulation. For more accurate approach, a more nodes are needed, and using further nodes will escalates the requisite computational time and computer memory. In order to determining the suitable number of nodes, it can be done by increasing the nodes number until the mesh being fine. Figure 2 presents the temperature variation with grid cell number for 4% vol. and Re=80×103. It was shown that the increase in cell number increases temperature until reaching to approximately constant value. 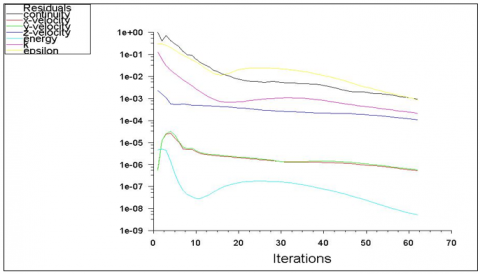 The CFD results are obtained and evaluated in terms of average heat transfer coefficient, Nusselt number, and pressure drop for the inlet coolant flow velocity corresponding to Reynolds number of 20×103, 40×103, 60×103, and 80×103, with Y2O3 volume fraction of 0, 2, and 4%. The single-phase approach with constant heat flux of 584 W/m2 is used to obtain the results. In all cases the particles size was considered equal to 40 nm.

The validation of the water-based Y2O3 nanofluids has been achieved using the correlations in the literature and considering a fully developed turbulent flow as a function of average Nusselt number and pressure losses for smooth wall pipe. The widely used correlation suggested by Maïga et al. [15] (8) is used to validate the average Nusselt number:

Correlation of Eq. (8) is used to calculate the heat transfer coefficient for the water-based Y2O3 nanofluid flowing in smooth tube under the condition of constant heat flux.

The velocity profile along the center of coolant fluid passing through the suchannel of 5% vol. is presented in Figure 4. It is noted that, the non-dimensional centerline velocity (V/Vin) increases as Reynolds number decrease, and decreases with non-dimensional flowing distance (Z/L). 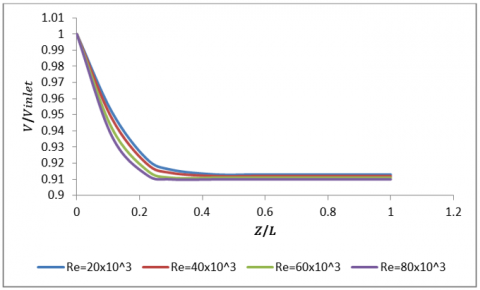 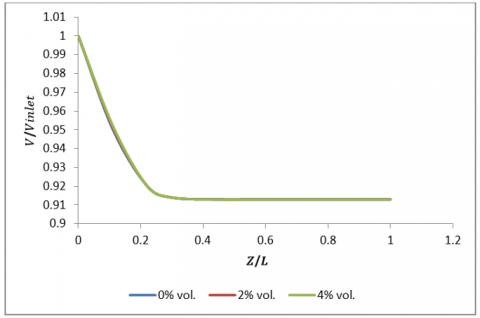 Figure 6. A) local velocity and B) turbulent kinetic energy at the coolant water outlet for Re=80×103 and 4% vol

Contours of temperature profile at the subchannel outlet for different particle volume fractions (0, 2, and 4% vol.) are shown in Figure 7 A, B, and C, respectively. It is clear that the presence of nanoparticles in coolant fluid has an advantageous effect on the bulk and wall temperatures compared to the case of fresh coolant water. 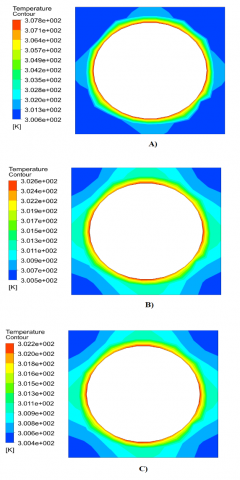 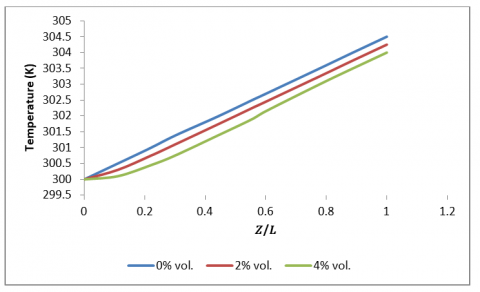 Figure 8. Temperature distribution along the channel centerline and Re=80×103

The drop in pressure caused by friction can be estimated by:

Eq. (11) can be used to find the effect of nanoparticle in coolant fluid, this achieved by the difference in pressure drop along the coolant fluid in subchannel and compared with base (fresh) fluid.

Table 4. Difference in pressure drop between 2 and 0%vol

The result reveals that the Y2O3/water pressure drop make maximum increases by about 19% and 94% for φ=2% and φ=4% of, respectively as shown in Tables 4 and 5.

Table 5. Difference in pressure drop between 4 and 0%vol 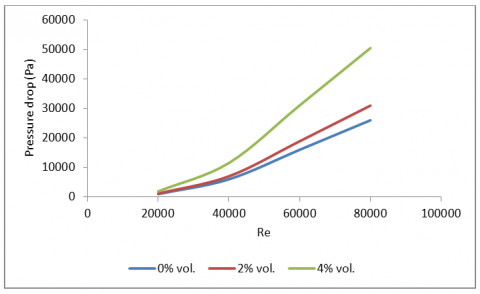 Figure 9. Pressure drop vs. Re for different %vol 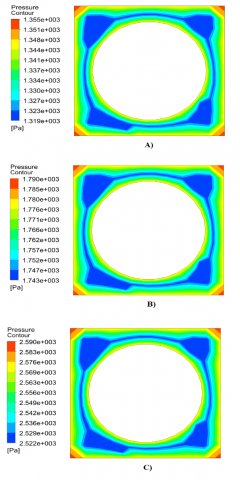 Heat transfer calculations can be made by applying a constant heat flux to the fuel rod walls along the subchannel and constant temperature at the subchannel inlet for different nanoparticle volume fraction. The local and average heat transfer coefficients are defined as follows:

Calculations of Nusselt number was done by averaging heat transfer coefficient values over the wall region surface, and listed in Table 6. The equation of average Nusselt number is estimated from the following equation: 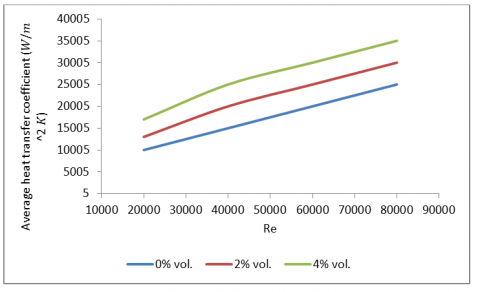 Figure 11. Average heat transfer coefficient for different %vol. and Re

Table 6. Average Nu for different %vol. and Re 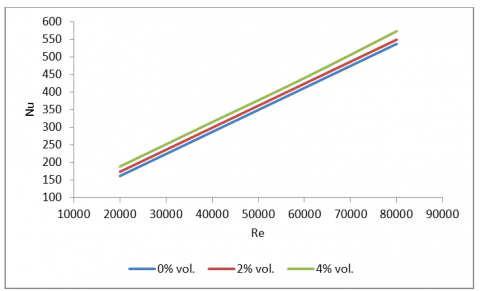 Figure 12. Average Nu for different %vol. and Re

3.5 Validation of the CFD results 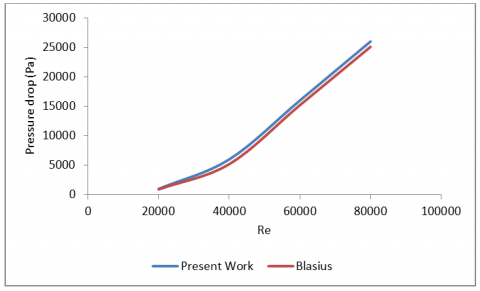 Figure 13. Comparison of pressure drop with Blasius correlation for 0% vol 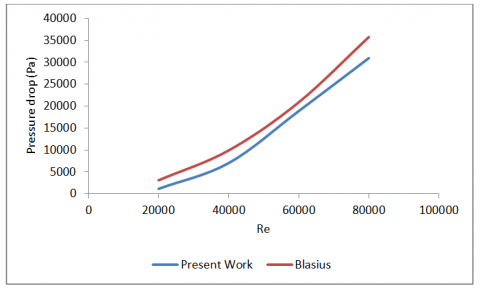 Figure 14. Comparison of pressure drop with Blasius correlation for 2% vol 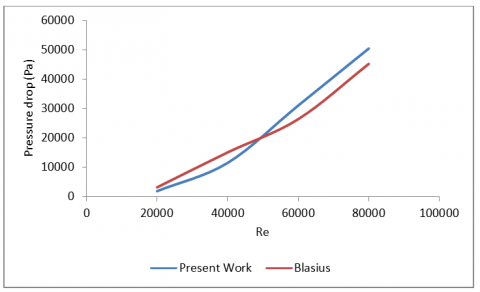 Figure 15. Comparison of pressure drop with the Blasius correlation for 4% vol 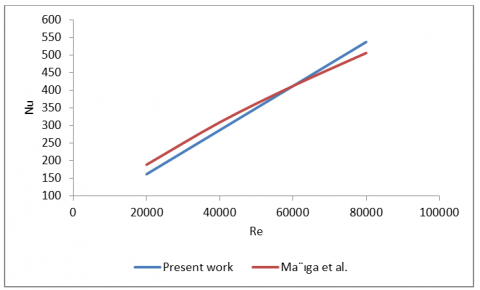 Figure 16. Comparison of average Nu with the correlations for pure water 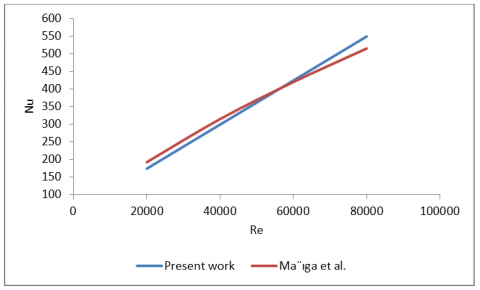 Figure 17. Comparison of average Nu with the correlations for 2% vol 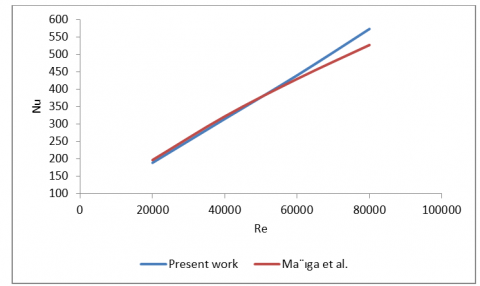 Figure 18. Comparison of average Nu with the correlations for 4% vol

Thermal analysis of heat transfer enhancement in subchannel geometry of pressurized water reactor using water-based Yttrium oxide nanofluid under steady-state turbulent flow condition, single phase, incompressible, and uniform heat flux. The CFD results are validated with the correlations in the literature and the conclusion can be listed as follows:

The authors would like to thank encouragement and assistance from their university, families, colleagues, friends, and tutors.