The governance of industrial water environment in the Yangtze River Economic Belt (YREB), the demonstration zone of ecological civilization in China, has attracted a growing attention. In this paper, an evaluation index system (EIS) with undesired output is established for industrial water resource utilization efficiency (IWRUE). Next, the stochastic block model (SBM) was adopted to measure the IWRUEs of the 11 YREB provinces in 2003-2017. After that, the Tobit model was employed to examine the influencing factors of the IWRUE. The results show that the YREB provinces differed sharply in IWRUE through the sample period; the downstream provinces achieved relatively satisfactorily IWRUEs, while most provinces in the upstream and midstream performed unsatisfactorily. The downstream of the YREB realized the highest IWRUE, followed in turn by the upstream, and the midstream. The YREB is significantly promoted by economic development, ownership structure, and opening-up, and significantly suppressed by water endowment, technological progress, and government influence.

To make matters worse, a large amount of industrial wastewater is directly discharged into the Yangtze River, due to the lack of effective supervision. The wastewater far exceeds the self-purification capacity of the water body, and strains the environmental carrying capacity of the water environment in the river. Currently, the chemical oxygen demand (COD), ammonia nitrogen (NH4+-N), nitrogen oxides (NOX), and volatile organic compounds emission intensity per unit area in the YERB are 1.5 to 2.0 times the national average. In this context, the only way to realize the sustainable development of YREB water environment is the improve the industrial water resource utilization efficiency (IWRUE).

The IWRUE has long been a hot topic among researchers. For example, Alnouri et al. [1] identified the problems in the current industrial water use pattern, such as heavy water consumption, serious water pollution, and high treatment cost, highlighting the need to evaluate IWRUE. Earlier, Filippini et al. [2] measured the IWRUE of Slovenia through stochastic frontier analysis (SFA). Later, Wang et al. [3] adopted the stochastic block model (SBM) to evaluate the IWRUEs of 30 Chinese provinces in 2009 and 2010. Through dynamic data envelopment analysis (DEA), Pointon and Matthews [4] assessed the efficiency of the wastewater treatment industry in England and Wales. All of the above studies have found that IWRUE has not been optimized, and should be further improved.

To sum up, quite a few results have been accumulated on the IWRUE. However, there are two defects with the existing studies: First, many scholars have examined the IWRUE in different countries, but few have tackled the IWRUE in the YREB. Second, the evaluation index systems (EISs) of the IWRUE rarely contain the pollutants generated in the utilization of industrial water resources. The neglection of the pollutants goes against the reality, resulting in errors in the evaluated IWRUE.

To overcome the defects, this paper establishes an IWRUE EIS containing undesired output (industrial COD), and measures the YREB IWRUE with the SBM. On this basis, the factors affecting the YREB IWRUE were discussed in details. The research results provide a reference for solving the problems in the industrial water environment of the YREB.

The traditional research on the IWRUE emphasizes the good outputs over the bad outputs (e.g. water pollutants) of the utilization of industrial water resources. The bad outputs can be regarded as the environmental cost incurred in the utilization process. Nanere et al. [8] held that the neglection of bad outputs might bias the evaluated efficiency. How to implement efficiency evaluation with bad outputs has been well studied over the years.

None of the above treatments are in line with the actual production activities, and bound to cause errors in the evaluated efficiency. The problem of efficiency evaluation with bad outputs was not solved perfectly until the SBM was proposed by Tone [11]. The biggest advantage of the SBM is the ability to include bad outputs as outputs in efficiency evaluation, which greatly improves the evaluation accuracy. The principle of the SBM is as follows.

where, sx-∈Rm, and sb-∈Ru are the slack variables of inputs, and undesired outputs, respectively; sy+∈Rd is the surplus variable of desired output.

According to the total factor connotations of the IWRUE and the results of Yao et al. [13], this paper constructs an IWRUE EIS from the angles of both inputs and outputs.

In summary, the established IWRUE EIS consists of four inputs and two outputs. The specific meaning of each index is given in Table 1.

To effectively promote YREB IWRUE, it is necessary to explore its influencing factors. These factors cannot be determined without a suitable measurement model. Traditionally, model estimation often relies on ordinary least squares (OLS) and generalized method of moments (GMM). Assuming that the explained variable has not constraint, these two traditional methods do not apply to our problem, because the explained variable in our model, IWRUE, must fall within [0, 1]. If OLS or GMM is applied, the regression results will be highly erroneous [14].

The Tobit model, named after its inventor, can meet the modeling requirements of our research. Also known as truncated or censored regression model, the Tobit model requires the explained variable to range between 0 and 1. Therefore, the influencing factors of the IWRUE were empirically tested by the Tobit model.

The existing studies have shown that the IWRUE is potentially affected by economic development [15], water endowment [16], ownership structure [17], technological progress [18], opening-up [19], and environmental regulations [20]. Drawing on these findings, this paper summarizes the influencing factors of YREB IWRUE into six factors:

Based on the above research results, this article summarizes the influence of YREB IWRUE into six factors: economic development (ED), water endowment (WE), ownership structure (OS), technological progress (TP), opening-up (OU), and government influence (GI). Taking the IWRUE as the explained variable and the six factors as explanatory variables, the Tobit model of the influencing factors on YREB IWRUE can be established as:

Table 2. The meanings of influencing factors

Based on the IWRUE EIS, the data on the inputs and outputs were imported into maxDEA to measure the IWRUEs of the 11 YREB provinces in 2003-2017.

As shown in Table 3, the YREB provinces differed sharply in IWRUE. During the sample period, Shanghai and Zhejiang were the only two provinces that maintained their IWRUEs at 1, i.e. on the efficient frontier. Their IWRUEs were optimal, leaving no room for improvement. Geographically, both provinces belong to the economically developed downstream in the YREB.

The mean IWRUEs of Jiangsu and Chongqing were 0.7504 and 0.7559, respectively, in the sample period. These two provinces achieved satisfactory results on IWRUE.

The mean IWRUEs of Anhui, Sichuan, and Yunnan were 0.5338, 0.4876, and 0.6765, respectively. Located in the midstream and upstream, these provinces performed relatively good on IWRUE, but need further improvement. 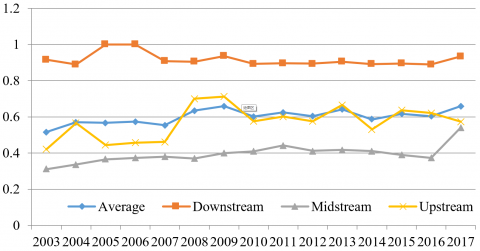 Figure 1. The IWRUE trends in the YREB and its downstream, midstream, and upstream

Based on the Tobit model (3), the effects of the influencing factors on YREB IWRUE were estimated on Stata 12. The regression results are recorded in Table 4.

Economic development (ED) has a positive impact on YREB IWRUE at the significance level of 1%, indicating that higher per-capita GDP promotes IWRUE. Without changing any other condition, every 1% growth of ED will increase the IWRUE by 0.2449%. On the one hand, economic development propels continued industrialization of the region, and promotes the modernization of industrial equipment, providing industrial enterprises with the material basis for water conservation. On the other hand, economic development motivates industrial enterprises to shift from extensive management to refined management, and reduce the intensity of water consumption, thereby lowering costs and enhancing competitiveness.

The estimated coefficient of water endowment (WE) was negative, passing the significance test at the 1% level, suggesting that more per-capita water resources suppresses YREB IWRUE. This reflects from the side that water-rich regions tend to have a low unit water price. Thus, industrial enterprises and other water users have a weak awareness of water conservation, and waste lots of precious water resources. The YREB is located in southern China, where water resources are relatively abundant. The unit water price in the region is relatively low. This obviously hinders the improvement of the IWRUE.

The ownership structure (OS) has a significant positive effect on YREB IWRUE. This means the IWRUE tends to increase with the industrial output of state-owned and state-controlled enterprises above the designated size as a proportion of the total industrial output. The possible reason is that, most state-owned and state-controlled enterprises in China are large enterprises. Unlike small and medium-sized private enterprises, these enterprises have advanced equipment, high production efficiency, and excellent water-saving and emission-reduction technologies. As a result, they can make intensive use of water resources.

Opening-up (OU) exerted a significant promoting effect on YREB IWRUE, as its estimated coefficient was as high as 0.8027, passing the test on the 1% significance level. This falsifies the pollution haven hypothesis on industrial wastewater emissions. The import and export trade continues to develop in the YREB. The high foreign environmental standards for export products force industrial enterprises to reduce water consumption and pollution emissions by adopting intensive and green production processes. In this way, the industrial water environment can be effectively improved.

Government influence (GI) has a significant negative effect on YREB IWRUE. In other words, the IWRUE in the YREB decreased, when the local governments diverted more funds to agriculture, forestry, and water conservation.

This paper sets up a complete EIS for the IWRUE, and adopts the SBM with undesired output to measure the IWRUEs of the 11 YREB provinces in 2003-2017. In addition, the influencing factors of the IWRUE were analyzed by the Tobit model. The main conclusions are as follows:

First, the YREB provinces differed sharply in IWRUE through the sample period. Specifically, Shanghai and Zhejiang maintained their IWRUEs at the optimal level of 1; Jiangsu and Chongqing achieved satisfactory results on IWRUE, leaving a small room for improvement; Anhui, Sichuan, and Yunnan performed relatively good on IWRUE, but need further improvement; Jiangxi, Hubei, Hunan, and Guizhou had extremely poor performance in IWRUE, which must be greatly improved in future.

Second, the downstream, midstream, and upstream of the YREB witnessed different IWRUE trends in the sample period. Overall, the downstream provinces had higher IWRUEs than those in the upstream and midstream.