In tunnel engineering, it is important to understand the influence of schistose structure on the failure strength of chlorite schist. To explore the strength control factors of chlorite schist, this paper firstly analyzes the mineral composition and meso structure of chlorite schist of different weathering states. The results show that the mineral composition of chlorite schist is changed during the weathering process, and that chlorite is an anisotropic rock mass. Next, a series of uniaxial compressive tests were conducted on chlorite schist samples with different bedding angles (the angle between bedding plane and loading direction; θ=0°, 15°, 30°, 45°, 60°, 75°, and 90°), moisture conditions (dry and saturated), and weathering states (strongly weathered and weakly weathered). Based on the test data, the authors discussed the change laws of the rock strength with bedding angle, weathering state, and moisture condition. The main results are as follows: Chlorite schist is a low-anisotropy rock mass, whose compressive strength exhibited a V-shaped trend with the growing bedding angle; the schistose structure is the internal cause of the deformation and the anisotropic or transversely isotropic strength of the schist; the schistose structure is reshaped and further damaged by external factors (e.g. water softening and weathering effects) in engineering. The research findings help to improve the rock stability and support design in tunnel engineering.

Among metamorphic rocks, schistose rocks are known for their significant anisotropy, which manifests as the obvious variation in strength parameters with the bedding angle (the angle between the bedding plane and loading direction) [1]. Chlorite schist, a typical metamorphic rock with schistose structure, features low strength and large deformation in engineering. In the engineering environment, chlorite schist is susceptible to expansion, disintegration, dissolution, and weathering [2].

In engineering, the primary failures of schistose metamorphic rocks include landslides and collapses in the rainy season, which occur in the form of consequent or insequent landslides [5]. When a shallow tunnel encounters the formation of schistose metamorphic rocks, the surrounding rock often suffers from structural collapse, and compressional deformation, inducing surface settlement [6]. These failures severely threaten construction safety and project progress. Take the Northern Hubei Water Resources Allocation Project for example. During the construction of the Tangxian-Shangshi (T-S) tunnel, largescale landslide, roof fall, and even thorough collapse took place in the chlorite schist segment. Therefore, it is of great importance to analyze the influence of schistose structure on the deformation strength of metamorphic rocks in lab tests.

Based on engineering behaviors, the above studies mainly provide qualitative results through theoretical and empirical analyses. These results are insufficient to satisfy the tunneling requirements under complex geological conditions. Despite these studies, the following issues remain unclear: the influence of external factors on the mechanical properties of chlorite schist, the influence of physical and mechanical anisotropy on tunnel excavation, the water softening effect and the law of anisotropic softening, and the law of damage evolution under schistose structure. 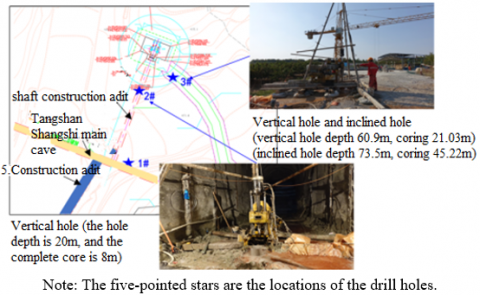 Figure 1. The drilling and coring positions 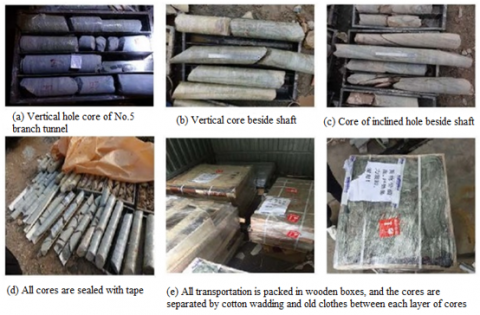 Figure 2. The cores and packages

To facilitate the study on the influence of schistose structure on the deformation and failure mechanism, the obtained cores were cut into 37.5mm×75mm samples (scale: 1:2), in the light of the core diameters and bedding angles θ. As shown in Figure 3, the bedding angles θ of the processed samples were 0°, 15°, 30°, 45°, 60°, 75°, and 90°, respectively. The mean density of the samples stood at 2,980kg/m3. The flatness difference between upper and lower ends fell within ±0.3mm, and surface flatness was controlled as ±0.05mm. Both ends of each sample were kept perpendicular to the axis, with an allowable deviation of ±0.25°. The processing precision was determined according to the Specifications for Rock Tests in Water Conservancy and Hydroelectric Engineering (SL264–2001). 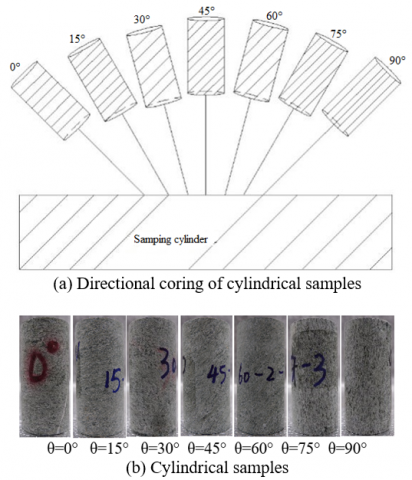 Chlorite minerals concentrate along the dominant development direction, and agglomerate into a heterogeneous layer, forming interbedding with quartz, mica, and albite minerals. This special distribution of minerals forms the macro schistose structure of chlorite schist. The macro mechanical behaviors of the rock are controlled by the meso features.

To facilitate the analysis on the macro schistose structure of chlorite schist, the meso physical structure and mineral particle distribution of the rock were explored through mineral composition analysis on the strongly weathered samples (T1-3) and weakly weathered samples (T5-7) of the chlorite schists collected from the Northern Hubei Water Resources Allocation Project, with the aid of X-ray diffractometry (XRD).

Table 1 compares the mineral compositions of the six samples obtained by XRD. It can be seen that the strongly weathered samples mainly encompassed albite (30%), quartz (20%), and muscovite (49%), plus a small amount of zeolite; the weakly weathered samples mainly consisted of clinochlorite (50%), actinolite (18%), muscovite (15%), and albite (15%), plus a small amount of dolomite.

It can be inferred from the results that strongly weathered chlorite schist contains fewer clinochlorite, actinolite, and muscovite, but more SiO2 and Fe than weakly weathered chlorite schist. The mesoscale reason lies in the oxidation reaction between chlorite schist and water. When the undisturbed rock is eroded by water, its clinochlorite, actinolite, and muscovite are hydrolyzed into soluble salts and insoluble SiO2 and Fe. The water erosion alters the mineral composition, and increases the pores in the rock, reducing its mechanical strength.

From the samples, it is learned that chlorite has a flaky meso structure. In the plane of the schistose structure, the mineral molecules of chlorite schist are evenly arranged, and superimposed into chlorite schist.

As shown in Figure 4(b), the strongly weathered sample contained numerous pores and micro-cracks. The micro-cracks extended along the edge of the sample. The macro distributions of minerals exhibited obvious directionality. Specifically, quartz existed as semi-idiomorphic to xenotopic crystals, and satisfied continuous and directional distribution in the form of colorless small yet visible inclusions; muscovite existed as flakes, obeying continuous and directional distribution; garnet existed as numerous small, pink homogeneous bodies.

From the meso mechanics, chlorite schist can be regarded as an anisotropic material superimposed from isotropic sheets of minerals. 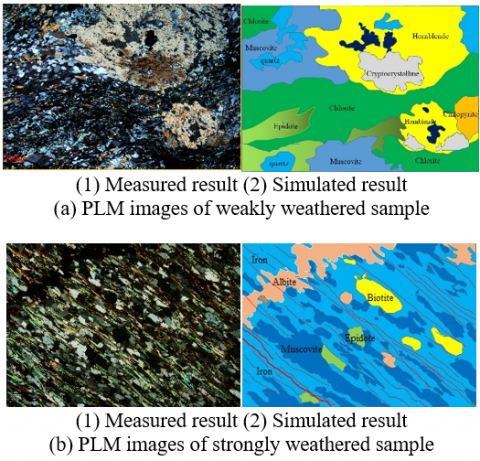 The load was applied by the MTS815.04 electro-hydraulic servo loading test machine at the Institute of Rock and Soil Mechanics, Chinese Academy of Sciences. The maximum vertical output is 4,600.0kN, the maximum axial tensile load is 2,300 kN, and the maximum confining pressure is 140MPa. The sensor arrangement is shown in Figure 5. 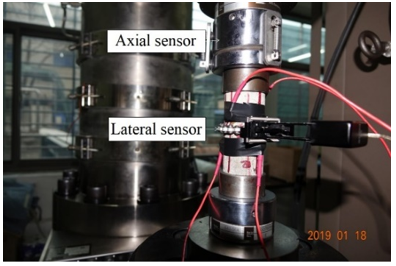 Uniaxial compression tests were conducted to compare the strengths, elastic moduli, and Poisson’s ratios of chlorite schist samples with different bedding angles, weathering states (strongly weathered or weakly weathered), and moisture conditions (saturated or dry). Based on the measured data, the authors summarized how the mechanical parameters of chlorite schist is affected by anisotropy, bedding angle, water softening effect, and weathering effect.

During the tests on bedding angle and weathering state, all the samples were in natural dry state. The saturated samples were prepared through 24h drying and 48h immersion in water in a vacuum tank at room temperature. According to the Test Methods of Rock for Highway Engineering (JTG E41-2005), the samples after 48h immersion has a moisture content as high as 94%, and will absorb very little water. Therefore, the saturated samples can fully demonstrate the water absorption features of the rock. 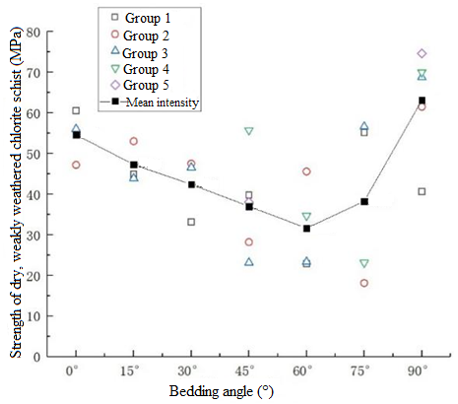 The mean anisotropy K1 of the uniaxial compressive strength of chlorite schist samples was obtained as 1.94. Referring to the Singh’s anisotropy ratio [17], the chlorite schists from the Northern Hubei Water Resources Allocation Project and Huangzangsi Key Water Control Project are both low-anisotropy rock masses.

The previous research [18] shows that the change law of uniaxial compressive strength is closely related to the bedding angle, and the angle between different layers bears on the failure mode of the schist [18]. 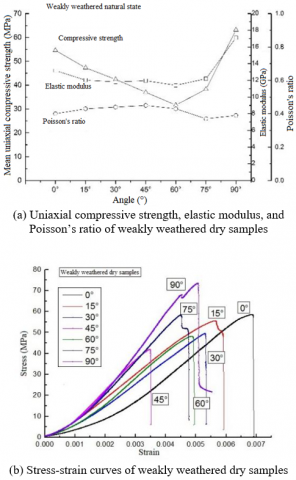 Figure 7. The influence of bedding angle

As shown in Figure 8, the samples with different schistose structures experienced three main failure modes. The sample with θ=0°-15° suffered tensile and shear failures along the bedding plane. Multiple parallel cracks gradually appeared on the fracture surface, causing the stress-strain curve to oscillate about the peak value. Moreover, large fractures appeared at the edges and ends of the failed sample. Fragments were observed on the uneven fracture surfaces. The overall failure mode is the shear failure of local matrix.

In the sample with θ=75°-90°, the main crack developed vertically downward along the schistosity, and penetrated the two ends of the sample. A few secondary cracks appeared nearby, causing the stress-strain curve to fluctuate before and after the peak. The fracture surface was very prominent, and large fractures emerged on the edges. The overall failure mode is the shear failure of local matrix. 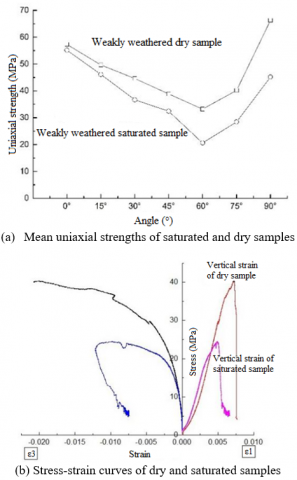 Chlorite schist is a typical soft rock with schistose structure. In engineering applications, the rock is affected by many factors, such as precipitation, surface water infiltration, groundwater, overburden thickness, air humidity, and temperature. The water softening property of this rock is bound to reduce the strength of the engineering rock mass. To clarify its softening effect, the saturated chlorite schist samples were subject to uniaxial compression test.

As shown in Figure 9(b), after the peak of the stress-strain curve, the axial stress entered the decline, but the lateral strain continued to increase. Thus, the bearing capacity of the sample plunged, and the strain energy was released quickly. To sum up, the strength of the saturated sample was about 0.8-0.82 times that of the dry sample, indicating a prominent softening effect. However, the effect of the bedding angle on the strength remains basically unchanged whether the sample is saturated or dry.

The deformation and instability of strongly weathered rocks are commonplace in shallow tunnels. In Section 2, the mineral compositions of weakly and strongly weathered chlorite schists are compared through XRD. The results show that redox reaction occurs between weakly weathered chlorite schist and the air, leading to the loss of some chemical elements. The ensuing changes of mineral particles induce pores alter the mechanical properties of the rock. 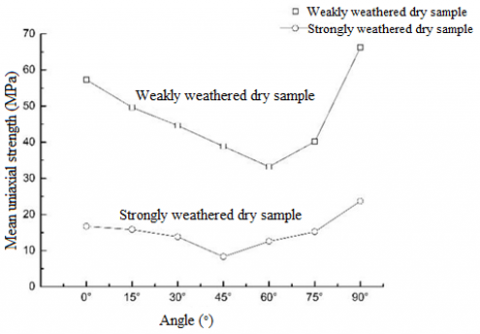 This paper carries out indoor uniaxial compressive tests on chlorite schists, and discusses how schistose structure, water softening effect, and weathering effect influence the rock strength. The main conclusions are as follows:

(2) Chlorite schist is a low-anisotropy rock mass. With the growing bedding angle, the uniaxial compressive strength of samples exhibited a V-shape trend: the strength decreased first and then increased. This proves the influence of schistose structure on the rock damage.