Most power operation and maintenance personnel are used to working with drawings like terminal block diagram. It is difficult for them to inspect, debug, and maintain virtual terminals, which are invisible and untouchable. To overcome the difficulty, graphic visualization should be conducted to visually display the device models and virtual connections in the SCD, creating a graph with a good spatial layout and high similarity to the conventional secondary circuit diagram. The graph will provide a good reference for project acceptance, circuit check, fault handling, and technical training, and thus improve the work efficiency of power operation and maintenance personnel [6-8].

Currently, there are many studies on the visualization of the secondary circuit in smart substation. Based on the information flows from different angles, some scholars [9-13] proposed graphical generation methods and solutions of SCD virtual terminals. Focusing on SCD comparison, some scholars [14-16] visually processed the SCD to enhance the readability of information, and improve the efficiency of power operation and maintenance personnel. Some scholars [17-20] provided technical solutions for visual operation and maintenance based on different models, and verified them through engineering application. Overall, the existing research results focus on the visualization of single equipment and its associated equipment, as well as the relevant techniques like testing and safety precautions. There is not yet any report on the visualization of the secondary circuit of the whole smart substation.

This paper mainly deals with the visualization of secondary circuit in smart substation. The secondary circuit configuration diagram of the whole station was generated dynamically, providing an innovative graphical display of the virtual connections between the protection devices and intelligent components. The visual display of whole-station virtual connections greatly facilitates the equipment operation by designers, as well as power operation and maintenance personnel. The research results have great significance in theory and practice.

Based on hybrid topology, this paper presents a method to display the secondary circuit of the entire smart substation. The visualization process was introduced in details, including key steps like the judgment of core IEDs, generation of local diagrams, and the formulation of the whole-station secondary circuit diagram. The proposed method was further explained with an example.

Specifically, virtual terminal diagram displays the information of all leading-in and leading-out virtual terminals in each device of the process layer, enabling users to view device information easily. This diagram is of great help to device renovation and substation expansion. Like the circuit diagram of conventional substation, secondary topology diagram presents the virtual terminal connections between each device and other devices. Logical link diagram shows the logical links between each device and other devices; the logical links, described with network parameters, demonstrate the connections between specific information. The main transformer association diagram and bus association diagram display the devices that protect the main transformer and the bus, respectively [21-23].

The existing secondary circuit visualization tools roughly fall into two categories, namely, system integration tools and digital instrument tools. The former tools provide an IED dataset and virtual terminal connections, and focus on the configuration of smart substation. The latter tools can graphically display the connections between virtual terminals, but fail to illustrate the entire model dataset or communication settings of the IEDs [24-26]. To sum up, each type of tools has its merits and defects. Neither type of tools is comprehensive enough in function. Further integration and improvement are necessary to develop between visualization tools for secondary circuit in smart substation.

(1) Selection of core devices: The SCD file should be analyzed to identify the important protection devices in the substation and their virtual connections.

(2) Construction of relationship matrix: The virtual connections between core devices should be described as a matrix.

(3) Definition of drawing priority: The sequence of core devices in drawing process should be determined based on the values in the relationship matrix.

(5) Generation of whole-station diagram: The local diagrams, which correspond to different core devices, should be merged dynamically into the whole-station secondary circuit diagram.

Each of the above key technique will be explained in details in the following section.

For simplicity, the devices in smart substation were classified preliminarily, so that the core devices could be prioritized in the drawing process.

After analyzing the core devices in smart substation and their protection principles, the key IEDs in the secondary circuit were divided into main transformer protection devices, merging units, intelligent terminals, and automatic backup switching devices. These devices are referred to as core devices in this research. The complex correlations between these devices may lead to omissions or incorrectness in maintenance and defect elimination. Special attention should be paid to prepare targeted control measures for such devices.

According to the serial number or description of the IEDs, the core devices were selected from the device list in the SCD file, and classified in a preliminary manner. The classification aims to roughly delineate the area of each device in the topology graph. The devices in the smart station were divided into three categories:

Class 3: The core devices not classified into Classes 1 and 2.

If Cij=1, device i sends GOOSE or SV signal to device j; If Cij=0, device i is not correlated with device j.

Furthermore, matrix C was tripled into a new matrix D, where the values in the lower left part were zeroed. The new matrix represents the virtual connections between core device in smart substation:

Table 1. The preliminary classes and drawing priorities of each type of devices

The drawing priority is 1 for each Class 1 device.

For any Class 2 device, the row i of the device in the relationship matrix was identified. Then, the columns j of the nonzero elements in the row were found out. After that, the devices correlated with that device were determined based on the elements in these columns:

The drawing priority is 33 for each Class 2 device correlated with only one Class 1 device.

The drawing priority is 2 for each Class 2 device in other conditions.

For any Class 3 device, the row i of the device in the relationship matrix was identified. Then, the columns j of the nonzero elements in the row were found out. After that, the devices correlated with that device were determined based on the elements in these columns:

The drawing priority is 31 for each Class 3 device correlated with two Class 1 devices.

The drawing priority is 32 for each Class 3 device correlated with one Class 1 device, and multiple Class 2 devices.

The drawing priority is 33 for each Class 3 device correlated with only one Class 1 device.

The drawing priority is 34 for each Class 3 device in other conditions.

4.4 Diagram generation based on hybrid topology

Step 1. Take a protection device (core device with drawing priority of 1) as the central node, identify the core devices correlated with this device, and form a star-shaped local diagram.

Step 2. Dynamically integrate the virtual connections between devices with drawing priorities of 1 and 31 into a ring-shaped diagram.

Step 3. Determine the location of each local diagram in the ring-shaped diagram, according to the virtual information, and place the local diagrams at the corresponding locations.

Step 4. Merge the local diagrams with the same name of core device into one diagram, without changing the correlations between the device and other devices.

To verify its effectiveness, the proposed whole-station visualization strategy for secondary circuit was applied to Jingkai substation, a 110kV smart substation with two voltage levels and 39 IEDs.

Next, the relationship matrix D22×22 (Table 2) was set up based on the preliminary classes and virtual connections of the selected core devices. In the matrix, the value of each element clearly represents the virtual connection and signal propagation direction between devices.

Table 2. Part of the relationship matrix between core devices

Submatrix D1,2 shows the virtual connections between Classes 1 and 2 devices. Taking PT1101A for example, d1,5 and d1,6=1 in the first row, indicating that PZ1101 and PZ1001 are information senders.

Then, the drawing priorities of Classes 2 and 3 devices were determined based on the relationship matrix D. For Class 2 devices, the definition of drawing priority was explained with MM1101 as an example. This device was found to appear in row 7 of the relationship matrix. In this row, there are d7,10=2, d7,11=1, d7,17=1, and d7,18=1, indicating that MM1101 is virtually correlated with IE1101A, IL1101A, IL1102A, and IT1002A. Hence, MM1101 is correlated with four Class 3 devices, and was thus assigned the drawing priority of 2. All Class 2 devices were traversed as above to determine their drawing priorities.

For Class 3 devices, the definition of drawing priority was explained with IL1101A as an example. This device was found to appear in row 14 of the relationship matrix. In this row, there are d14,1=3, d14,5=1, and d14,7=2, indicating that IL1101A is virtually correlated with PT1101A, PZ1101, and MM1101. Hence, IL1101A is correlated with one Class 1 device and two Class 2 devices, and was thus assigned the drawing priority of 32. All Class 3 devices were traversed as above to determine their drawing priorities.

Based on the virtual connections, the locations of the four local diagrams in the ring diagram were identified. Then, the four local diagrams were placed at these locations. The local diagrams with the same name of core device were merged into one diagram, without changing the correlations between the device and other devices. According to the relationship matrix, the arrow represents the propagation direction of GOOSE and SV signals. In this way, the secondary circuit diagram of Jingkai substation was completed (Figure 3). 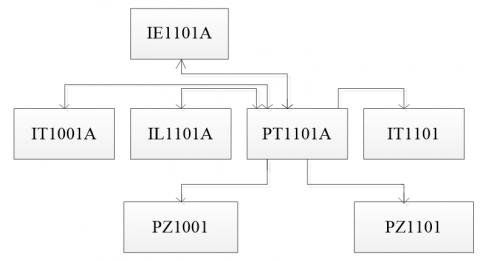 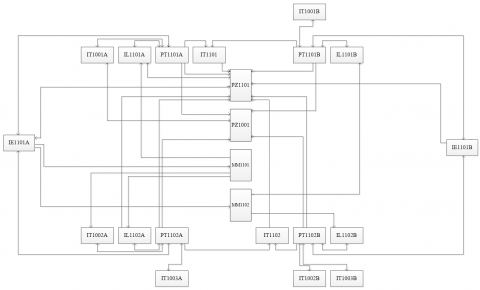 The current visualization methods for secondary circuit in smart substation only display the virtual connections or logical links between a single device and other devices, failing to present the secondary circuit of the entire substation. To make up for the gap, this paper puts forward a novel whole-station visualization method for secondary circuit based on hybrid topology. The core devices were selected to filter out the unimportant devices, reducing the complexity of the whole-station diagram. The relationship matrix was established to sort out the virtual connections between IEDs, which simplifies the queries. Besides, the spatial layout of devices was optimized, drawing on hybrid topology and drawing priority. During the diagram generation, local diagrams centering on protection devices were prepared first, and then dynamically merged into the whole-station secondary circuit diagram, according to the relationship between protection devices.

The engineering example shows our visualization method provides an innovative graphical display of the virtual connections between protection devices and IEDs in the entire substation. There are multiple advantages of our method: The output diagram covers lots of devices, boasts a large information capacity, and clarifies the structure of the virtual connections, allowing relevant personnel to quickly familiarize with the network structure and virtual connections of secondary devices throughout the substation. Besides, the whole-station secondary circuit diagram is highly scalable. Taking the diagram as an information container, various information could be added, namely, soft pressure plates, network communication parameters, and switch models, which helps to improve the efficiency of professional jobs like design, debugging, operation and maintenance.