A reflective metasurface technique is used to enhance the gain and reduction of backward radiation of an antenna. A normal metal slots is placed around the radiating patch to get the improved gain. Another metasurface antenna is placed with 10mm Gap from the radiating antenna to get the high radiation and enhanced directivity. A partial ground and line feeding with the conventional coplanar wave guide technique is used to improve the over all result. A rectifier circuit has been designed to harvest the electromagnetic energy to convert the DC output power. In the proposed model 8.1dB of Gain and -13.1dB of backward radiation with 2.82V of DC output power has been observed. The entire simulation and measurements has been done on HFSS and ADS software.

Metasurface is one of the important techniques in the 5G technology to get the enhanced results with the miniaturized antenna [1]. By using the metasurface antennas a more RF energy can be harvested [2]. Generally metasurface antenna has a left handed properties which has both permittivity and permeability are negative with negative refractive index [3].

Rectenna (Rectifier + filter) is a significant technology for collecting electromagnetic energy from the receiving antenna [4]. The Impedance matching network, Rectifier circuit, and Voltage doubler circuit make up the Rectenna [5].

Over the past few years a lot of research has been going on in the field of wireless power transmission. Liu et al. designed a rectangular patch with the dual substrate and successfully achieved the 3.57 dBi of forward gain and 7.5 dBi of backward Gain [6]. Zhao et al. had designed the 4x4 complementary split ring resonator with the 74cmx74cmx1mm and achieved very low efficiency with the 35.1% of 10dbm of input power [7].

Hu et al. has achieved the 25MHz of bandwidth at 2.45GHz of resonating frequency [11]. Zhang et al. had designed the stair case rectangular shape slots on the radiating patch and achieved the high of 4.5dBi of gain with the low bandwidth and low output power [12]. Ghaderi et al. simulated the rectangular slot with the 9x9 phased array and they found the very low bandwidth 100MHz at 2.4GHZ resonating frequency [13].

From the (Table 1) Literature review it was observed that the Most of the metasurface antenna with RF energy harvesting applications has achieved low bandwidth and low Gain. This paper aims to design the metasurface antenna with the high Gain and high bandwidth to achieve the high output Voltage. Liu et al. 2019 [6] achieved the Gain of the designed antenna is 3.5dB and 12.8dB of the Backward Radiation. For the proposed antenna it was founded the Gain of the Antenna is 8.0 dBi and Backward Radiation is -13.1dB. In the proposed antenna the Receiving the antenna Efficiency is 93.5% with 113.5 of Front to back ratio.

In open literature, a good receiving antenna efficiency achieved by using reflector but not gain and bandwidth [7, 9-11, 13].

Metamaterial is the three dimensional in structure with the artificial medium, due to its negative permittivity and permittivity the Gain or radiation efficiency improved with the less dimensions of the antenna. The main drawback on metamaterial is manufacturing very difficult in the bulk quantity [14]. Metasurface is the two dimensional in the structure with the negative permittivity and permeability, due to its 2D structure it is very easy for manufacturing. So it is one of the booming technology in the present research [15].

As one of the most suitable antenna for the receiving the electromagnetic energy is the metasurface antenna. The proposed antenna has been designed with the dimensions 96mmx84mmx1mm of each substrate with the FR4 is the dielectric substrate.

A rectangular slot is present around the radiating patch antenna on the top substrate, and a 4x4 square form Defective ground shape is present on the reverse side. The FR4 substrate has a reflective metasurface with dimensions of 96mmx84mmx1mm, and the gap between the two substrates is 10mm. The backward radiation is eliminated by using a reflecting metasurface, which improves the antenna's gain and backward radiation.

Due to the Reflective metasurface the Backward radiation is reduced, so the receiving energy from the antenna is also improved. In this paper the Rectenna is designed with LC-impedance matching network with the Voltage Multiplier Circuit and achieved the 2.82V of DC voltage and 112µA of DC current. 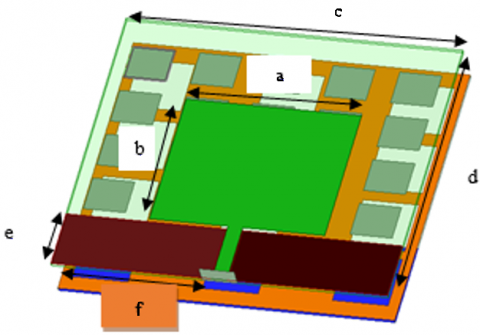 Figure 1. The characteristics of top view of proposed antenna 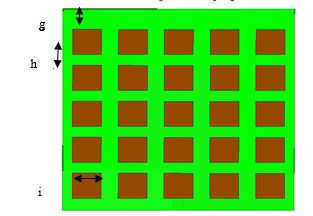 Figure 2. The characteristics of back view of the top substrate (back view) 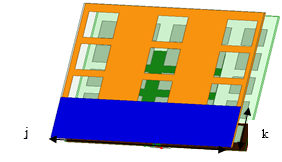 Figure 3. The characteristics of proposed aerial with the partial ground (back view) 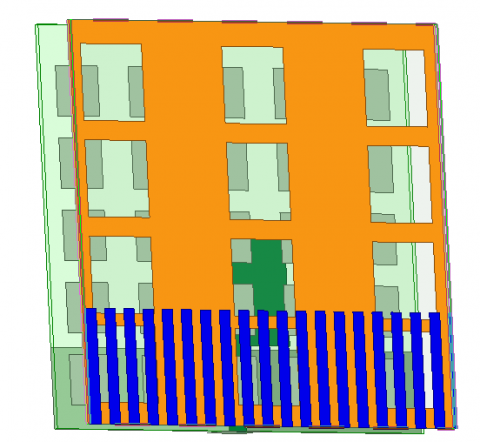 Figure 4. The characteristics of the proposed antenna with DGS (back view)

Table 2. Dimensions of the proposed aerial

The Table 2 shows the dimensions of the suggested antenna and it is mesured using the FR4 dielectric substrate. The size of suggested aerial is 0.768λ0×0.672λ0×0.008λ0 with the gap between two substrates are 10mm.

In this section various aerial parameters can be discussed with the simulated and measured results.

Return loss can be defined as the how much power is reflected back from the input terminal. Reflection coefficient is defined as [16].

where, $\Gamma$ is reflection coefficient.

Return loss is calculated from

From the Eq. (2) the return loss is calculated as -24.68dB, whereas the by using the software it was founded for the designed aerial has been operated in dual band and the return loss is -24 dB at 2.4GHz frequency. It was observed that the 480MHZ and 770MHz of bandwidths at 2.4GHz, 6GHz resonating frequency. 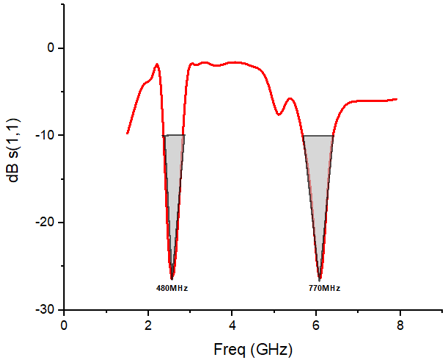 In the Figure 5 the shaded region shows the bandwidth of 480MHZ for the designed aerial.

VSWR is termed as voltage standing wave ratio. It is calculated by the Eq. (3)

where, $\Gamma$ is reflection coefficient.

Directivity for the rectangular patch can be given by the Eq. (4) [16].

where Grad is radiation conduction of the patch, $\eta$ is efficiency, k0 planks constant.

In general gain cannot be less than directivity because the efficiency is in between 0 and 1.

where, G is gain of antenna, $\eta$ is efficiency, D is directivity of antenna.

It was founded that the gain for the designed aerial is 8.0dB and it is shown in the Figure 7. 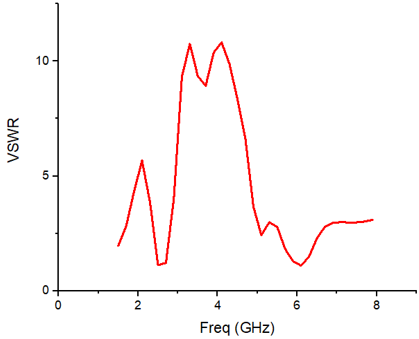 Figure 6. VSWR of the designed aerial 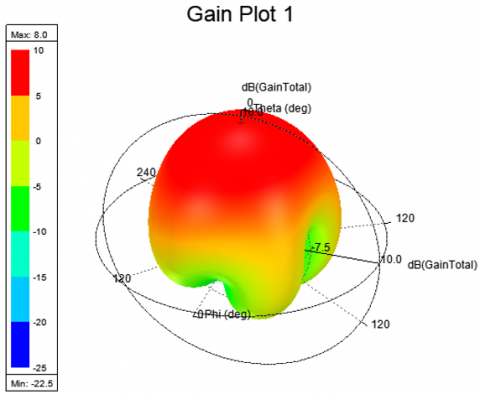 The maximum electric field for the designed antenna is 2019V/m and the maximum Magnetic field is 5.5A/m. 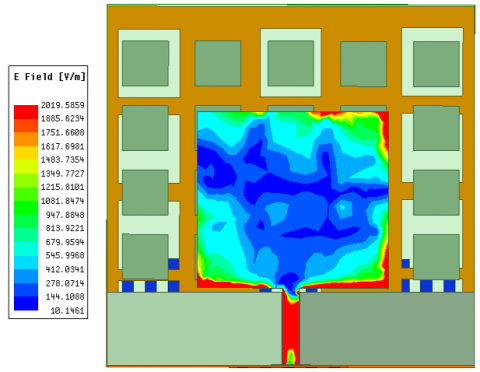 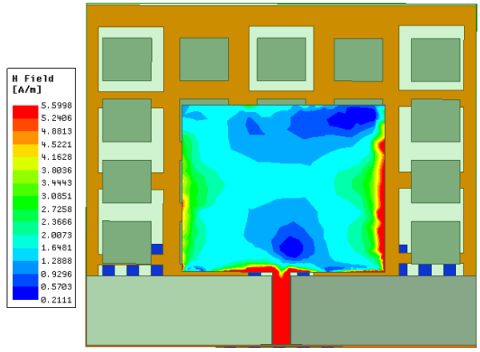 Radiation pattern is defined as the “Mathematical representation of the radiation properties of an aerial” [16].

In general Radiation pattern is calculated by using the Eq. (6)

The Eq. (7) shows the Radiation pattern of the Microstrip patch antenna. where electric field E within the patch is normal to the patch and the Ground and Magnetic field is parallel to the patch.

The Figure 10 and Figure 11 indicates E-plane and H-plane of the radiated metasurface antenna. 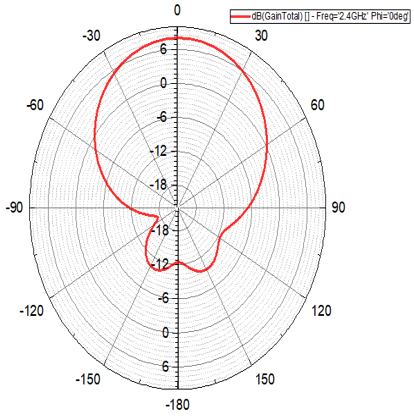 Figure 10. E-plane of the designed antenna at 2.4GHz 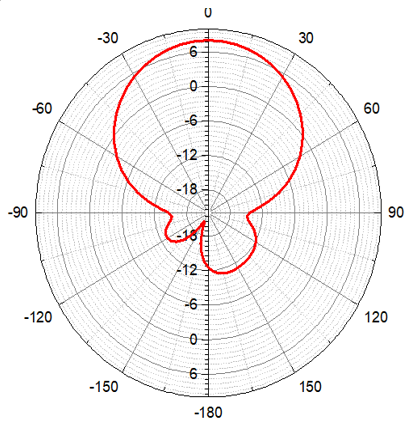 Figure 11. H-plane of the designed aerial at 2.4GHz 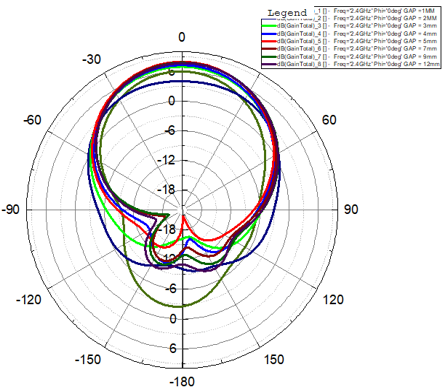 Figure 12. E-plane of the designed antenna by varying the Gap with the DGS at 2.4GHz 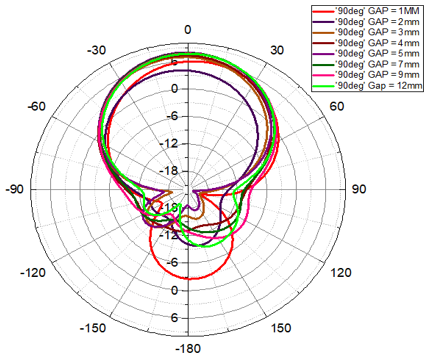 Figure 13. H-plane of the designed aerial by varying the gap with DGS at 2.4GHz 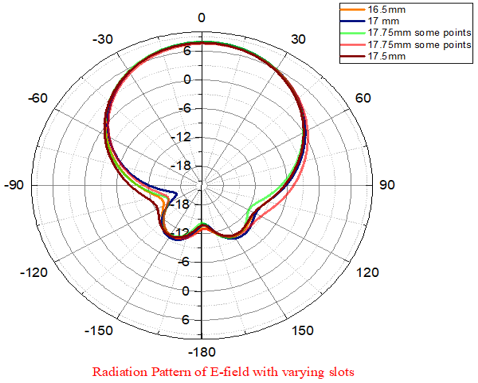 Figure 14. Radiation pattern of E-plane with varying the slots at 2.4GHz

The gap between the two substrates in the proposed aerial varied from 1mm to 12mm. The E-plane of the planned antenna is shown in Figure 12 and H-plane is shown in the Figure 13.

It was observed that by varying the slots width on the backside of the top substrate the radiation pattern can be vary which is shown in the Figure 14 and Figure 15.

In general efficiency is defined as the power radiated by the Microstrip patch antenna to the receive power [16]. 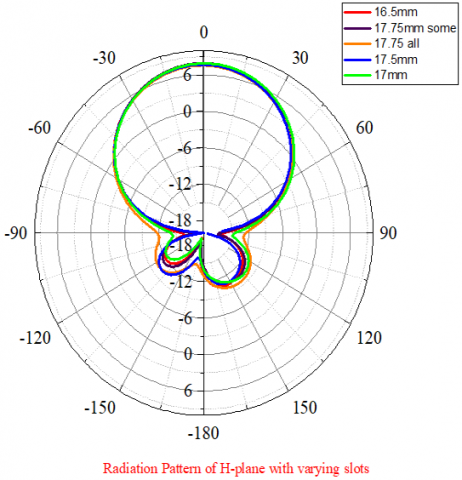 Figure 15. Radiation pattern of H-plane with varying the slots at 2.4GHz

Rectenna is one of the important techniques to harvest more electromagnetic energy from the receiving antenna. The Figure 16 shows the block diagram of the RF Energy harvesting. 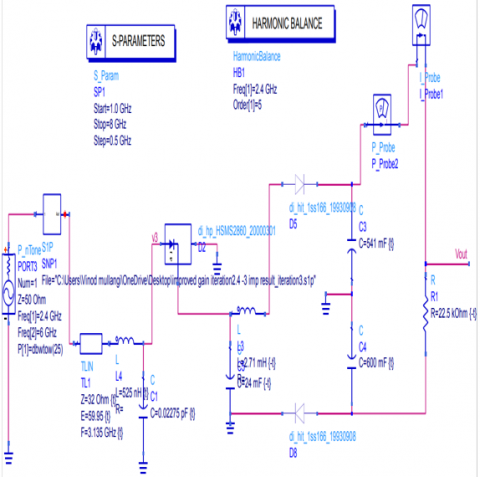 The block diagram of the RF energy collecting system is shown in Figure 16. The signal is received by the antenna once it has been transmitted and fed into the Impedance matching network. After matching the impedance, the signal is delivered into the Rectifier, which transforms the alternating current to direct current. It can then be transmitted into a Doubler circuit or a DC-DC Voltage Booster circuit to acquire the highest voltage, which can subsequently be supplied to the load.

For the designed aerial to receive signal from the receiving antenna, impedance matching network can be designed by using the TLIN (lambda/4 transmission line) with the LC matching network. The inductance and capacitance value is calculated by Eq. (8)

The Figure 17 shows the Rectenna designed using the HSMS2860 diodes. Two diodes are connected in forward and backward directions with two capacitors (c1= 541mf, c2 = 600mf) in the suggested circuit. 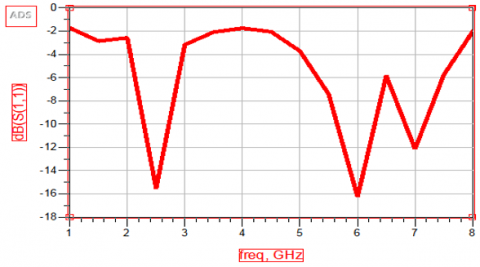 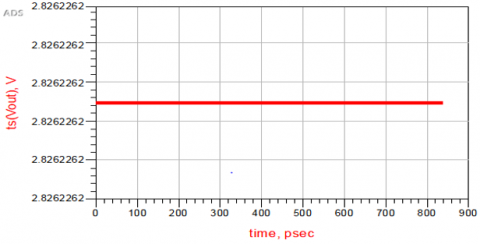 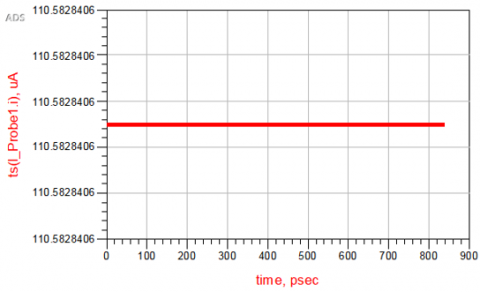 The Figure 21 shows the fabricated model of the proposed antenna. The designed antenna has fabricated on FR4 substrates. 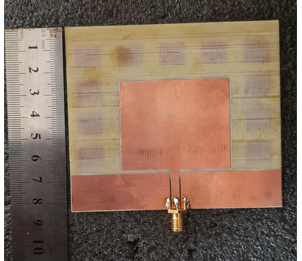 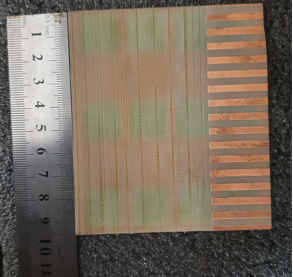 Figure 22. Fabricated antenna on back view 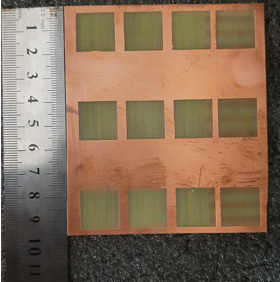 Figure 23. Fabricated antenna on front view of the bottom substrate 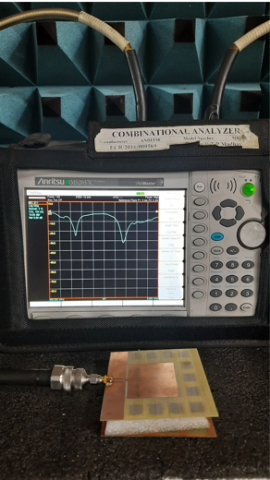 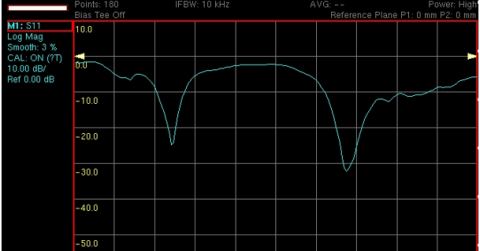 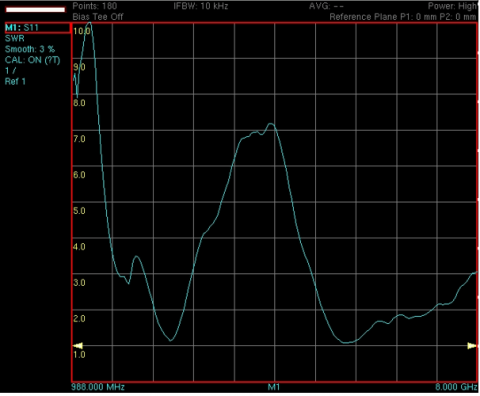 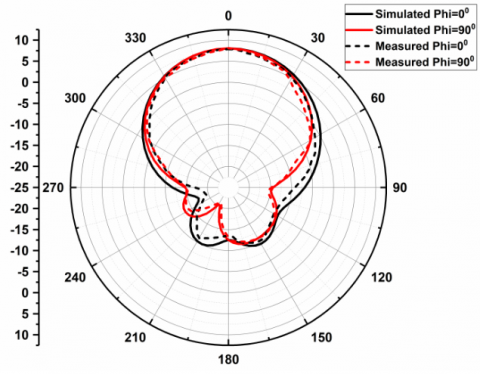 Figure 27. Radiation pattern of the designed antenna at 2.4GHz 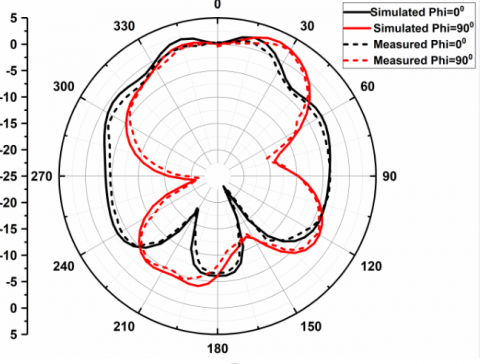 Figure 28. Radiation pattern of the designed antenna at 6GHz

The Table 3 shows the comparisons of the proposed work with the existed literature.

Table 3. Comparison of the proposed antenna with the existed work

The primary goal of this study is to design a metasurface antenna for use in RF energy harvesting applications in order to improve gain and bandwidth. It has been observed that from the open literature that a maximum gain of 3.5dBi and a bandwidth of 110MHz is achieved with a low output voltage.