At the 2nd AIGE Conference (Pisa 2008) I gave a contribution entitled: "Strategy for research on energy technologies of the XXI century: a long-term look" authors Piergiulio Avanzini and Andrea Del Giudice [1]. Inside there is a long-term scenario of the commitment of energy technologies with respect to the availability of resources. The model was based on data available in that year, in terms of probable reserves of sources and their consumption to meet the expected energy demand. The latter parameter was evaluated taking into account the expected growth of the world population. Other assumptions were the development of clean coal technologies and fourth-generation nuclear power plants. 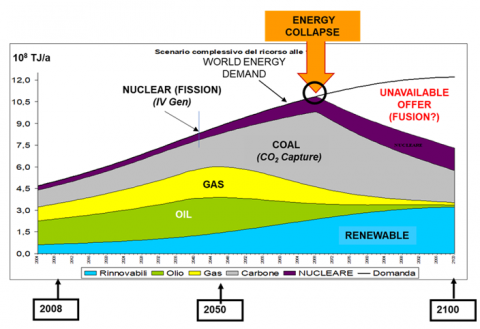 Figure 1. The most probable scenario in 2008

At that time the research effort on these technologies was working well.

The scenario of 2008 is shown in Figure 1 represents the most reasonable forecast considering the hypotheses formulated and shows a criticality (energy collapse) located between 2060 and 2070; period in which the demand starts to not be satisfied by the supply of sources and technologies. The depletion of world oil and gas reserves should have been offset by the increase in new generation nuclear and coal technologies and a physiological appeal to renewable technologies. The latter had an upper limit due to saturation [2].

My collaborators and I left this kind of studies a year later because they had no impact on the research community. After 10 years I decided to look again at the model considering how the 2008 hypotheses have changed.

2. Up Dating the Forecast

What happened in the meantime is:

• Substantially the world's fossil fuel reserves have not increased

• Advanced nuclear and clean coal technologies have not been proposed.

• World energy demand is increasing faster than in 2008

• Expectation towards renewable technologies is stronger

• There is a strong correlation between world population growth, growth in Gross Domestic Product (GDP) and energy demand (Figure 2)

The most reasonable scenario resulting from our model is shown in Figure 3. 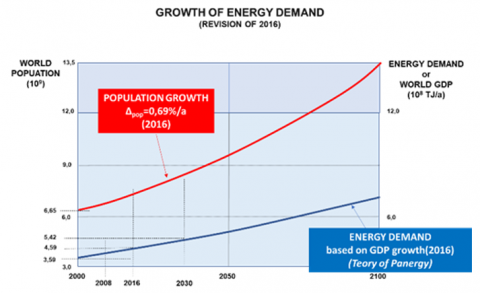 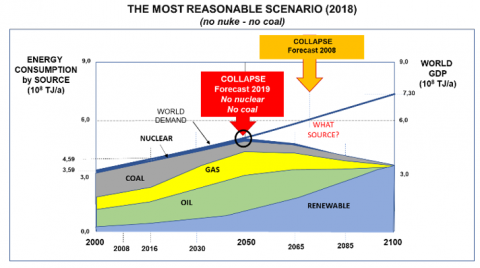 According to this model the Energy Collapse is more critical than the Environmental Collapse due to climate change.

The maximum available renewable energy is determined by the assumptions made in 2008 which are summarized in Figure 4. 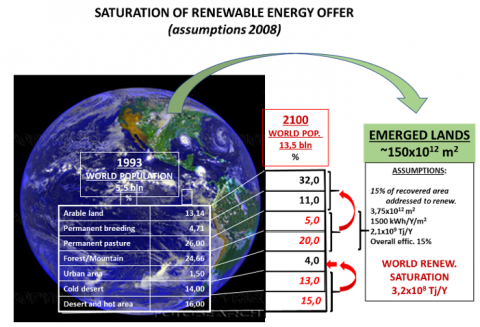 The saturation level is reasonable considering the actual and expected use of territory (emerged lands) and the reasonable level of efficiency at which solar radiation impacting the territory can be used. Under these considerations the maximum expected renewable contribution is 3.2x108 TJ/y [3].

Now the question is what could we do to avoid the disaster? And, as a consequence, could we shortly develop renewable technologies capable to overcome the actual saturation of the planet resources?

And furtherly, could we hope to cover the overall 2100 demand? In this case the scenario should be that of Figure 5. 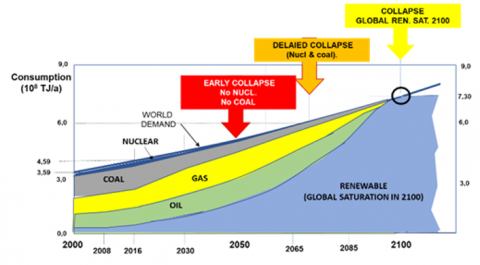 In this scenario all the fossil reserves (excluded coal) are burned during the century and simultaneously replaced by renewables. The collapse is postponed to the year 2100.

Our planet is actually covered by water for the 70%. Recent studies on climate change state that part of the emerged lands could be submerged within this very century. As we have seen, even if this will not happen will not be possible to use more than 3.2x108 TJ/y of the solar energy (direct and indirect) impacting the emerged lands [4]. 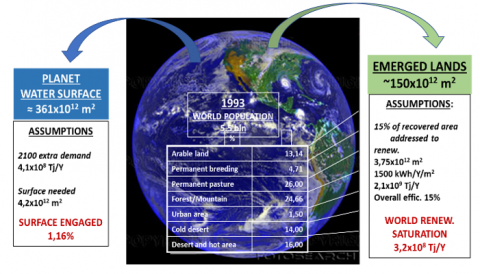 We should look at ocean surface as a new space where to install our capture equipment. Figure 6 explains how, to achieve the extra demand foreseen in year 2100 (4,1x108 Tj/y) the surface of capture is only 1,16% of the overall sea surface.

4. A Glance to Italy

Restricting the field to Italy, the potential of Marine Energy production is shown in Figure 7.

Considering the 1,16% of the Italian territorial waters, we could produce 0.36x106 GWh/y, almost the same amount of the electricity production in 2017 [5]. 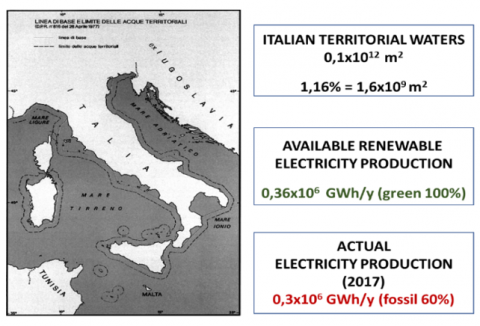 Direct and indirect offshore solar technologies are different. Those who are dedicated to the production of electricity are, in general, very impactful on landscape and also the local bio-ecosystem is affected [6]. See, for example, Figures 8, 9 and 10 which refer to PV, Wind and Solar Pond respectively. 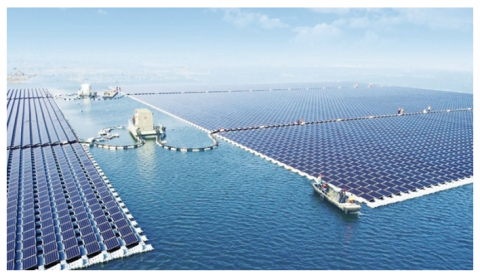 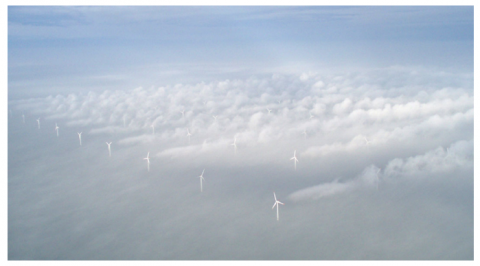 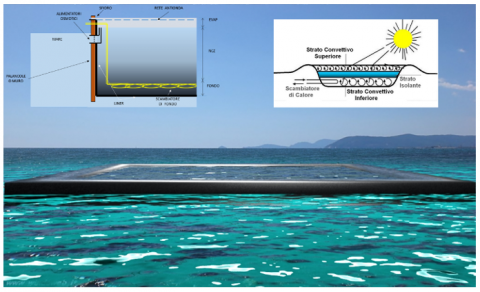 Less impacting technologies are those that can be integrated in coastal infrastructures as shown in Figure 11.

Figure 12 refers to the possibility of updating the wave generators inside the protection breakwater of the port of Genoa (Italy) for which a restructuring project is under discussion. It is a 10 km long structure with excellent exposure to the impact of the prevailing wave motion [7]. 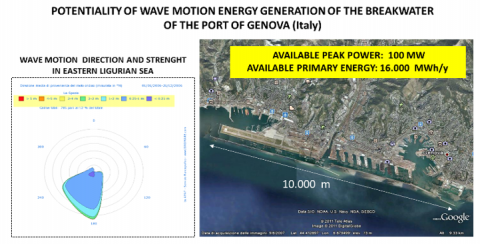 Figure 12. Breakwater potentiality of the port of genoa

It is interesting, especially for a country like Italy, to consider Sea as a thermal storage of solar energy so that it can be used for air conditioning of houses [8, 9]. Figure 13 schematically shows a way in which it can be done. It is useful to consider that this is a characteristic with almost no environmental and landscape impact. 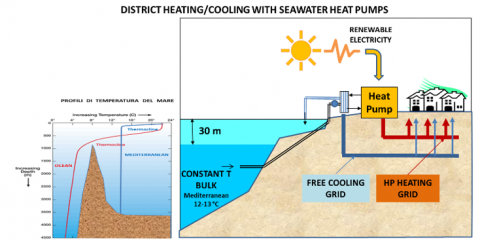 In the coming decades the world will have to face not only climate changes, which exist regardless of whether they are anthropogenic or not, but also a growing scarcity of the usual energy sources, due to both hostility to many of them and depletion of reserves. The growing use of renewable technologies cannot be without impact. In my opinion, it is necessary to reconsider the technologies that have an impact in terms of risk and not in terms of structure (such as nuclear fission and coal combustion with carbon capture and storage).

In fact it is better to accept (from a planetary point of view) a local pollution due to a rare occurrence rather than a continuous and hopeless damage that accumulates without end.