The Application of AVC System in Inner Mongolia Wind Farm

The Application of AVC System in Inner Mongolia Wind Farm

With the continuous development of wind power in China at present, which the safe and stable operation of power grid has brought great challenges due to the inherent intermittent of wind power. The reactive voltage problem is becoming more and more attention. At present, wind power access power grid is mainly in two problems one is that the wind electric field is lacking in reactive power/voltage control strategy, the voltage fluctuation of the high voltage side bus (network point) of wind farm is too large to meet the voltage assessment requirements of the power grid, The other is that lack of coordination control within the wind power plant, in the case of high fan output, it causes the voltage of the terminal voltage of the fan machine to be limited. According to statistics, the rate of reactive/ voltage power in less wind farms reaches more than 90%. The AVC system plays a crucial role in ensuring reducing the reactive loss and improving the safety and stable operation of the unit, the voltage pass rate of the network node. Inner Mongolia is the most installed provincial power grid in China, and there have been a lot of wind and wind power in the wind power of the wind farm.

This project studied the key technology of self-regulation voltage control in wind electric field, and clarified the AVC main station and sub-station technical index of wind farm group in the area of large-scale wind power generation. By studying the AVC control strategy of wind farm, the AVC simulation test platform of wind farm was developed, and the actual control effect and dynamic response characteristics of wind farm AVC were evaluated.

2. The Principle of AVC System

2.1 The structure of AVC system

In accordance with the requirements for smart grid scheduling, the automatic voltage control system (AVC) of wind power should have the function of coordinating the reactive power of the wind farm. The bus voltage of the high and low voltage side of the main transformer of the wind farm should be controlled within the scope of dispatching requirements, so that the reactive power supply can run at the optimal power point. Wind farm AVC mode adopts hierarchical hierarchical control mode. The reactive power and voltage of each wind farm are coordinated and controlled through the regional station, and the coordination control between the regional stations is achieved through the scheduling side wind power AVC main station. The voltage control goal of the wind field is to control the voltage value of the public connection point (PCC) in the wind field. The principle is shown in Figure 1 [1-5].

2.2 The principle of SVC device 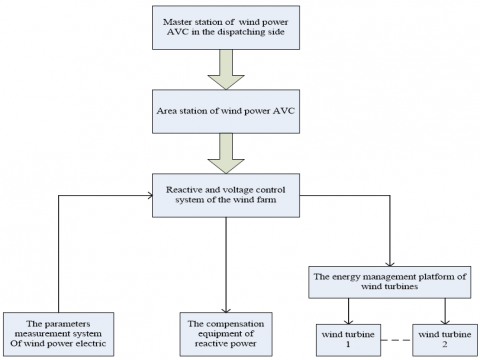 Wind farm reactive power / voltage control is a multi-objective and multi system coordinated optimization control process, which is composed of local wind farm booster station, wind turbine automatic system monitoring system and reactive power compensation equipment. On the premise of system stability and equipment safety, the reactive power of various equipment can be optimized and balanced to meet the requirements of voltage safety control and improve the stability margin of the system. The control procedures and principles are as follows:

(1) through the control of the wind farm reactive power control system for the bus voltage and the voltage of the fan machine, within the wind farm equipment safety under the condition of real-time tracking and meet the requirement and node voltage (grid economic operation requirements) [14];

(3) The comprehensive monitoring, state estimation by wind farms, the realization of wind power at the same time to avoid invalid sampled data calculation, the influence of guarantee the overall reliability of the system, avoid the voltage fluctuation causes the fan to take off the net.

Wind farm integration AVC is a by many the respective systems, this project use of typical centralized monitoring system for wind farm operation of the simulation of RTDS model (including active control and reactive power control), through the establishment of simulation model of wind farm reactive power compensation equipment AVC test platform model of wind farms, the analysis of wind farm AVC control performance. This project studies the interface technology specification of wind farm AVC, and regulates the AVC performance index and interface protocol of different manufacturers.

Wind power system model: booster station high side for 220 kv single busbar, low voltage side is 1 period of 35 kv bus bar, a total of 1 on-load voltage regulating transformer, 35 kv bus access 2 sets power lines and a set of reactive power compensation equipments SVC/G, one set of wires connected to the N turbine (equivalent to the fan capacity), another set of wires connected to the two fan, the fan type for doubly-fed induction generator, stand-alone capacity of 1.5 MW, the scope of the power factor of plus or minus 0.95, SVC/G capacity of continuous adjustable, system structure diagram shown in the Figure 2. 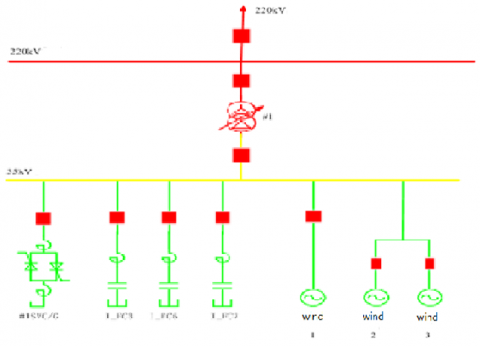 When voltage, reactive power and frequency are limited (the limit can be fixed), the pac-4000c wind AVC substation system can automatically block the corresponding reactive power adjustment device or exit the operation when the protective action and switch trip are switched off. The test results are shown in Table 1.

The wind power AVC substation system realizes the reasonable distribution of reactive power among the regulating devices when the external system is stable, the output of the wind farm and the standard voltage of the busbar. 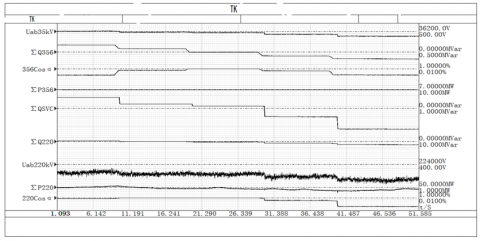 The overall adjustment time is 30s, and the order of AVC is adjusted every time. The fan adjusts 500ms, the SVC starts after the adjustment, and the SVC after 18ms is completed. Each adjustment interval is 10s. 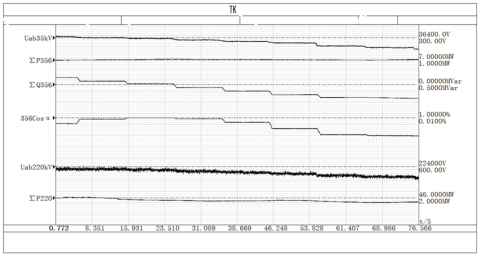 Through the above analysis, it can be concluded that the AVC control precision meets the requirements, the fan and SVC control sequence is correct, and the reactive power distribution is reasonable.

It can be seen that the power factor of the fan can be adjusted from 0.97 to the entering phase of 0.92. Considering the local box and the line capacitance, the actual power factor range of the fan is 0.95 to 0.95.

Wind farm AVC system control limit and safety test of security lock and alarm. When one of the following situations occurs, the wind power AVC substation system will automatically block the corresponding reactive power adjustment device or exit the operation, and then recover the regulation after normal.

In this paper, on the basis of a wind farm in Inner Mongolia AVC system digital simulation model is established, and the field experiment was carried out on the AVC system control performance analysis, solve the wind field and node voltage overrun, low reactive response speed for a long time. Results in this paper to improve the performance of the wind farm reactive voltage control system, reduce the wastage of the wind farm in the reactive power source, improving the efficiency of different reactive power source within the wind farm, avoid assessment of power caused by the voltage overrun, provide technical support to improve the wind power generation online, has good social and economic benefits.