A Fatigue Driving Detection Algorithm Based on Support Vector Machine

A Fatigue Driving Detection Algorithm Based on Support Vector Machine

This paper adopts an algorithm that combines the improved Support Vector Machine (SVM) with facial feature extraction to detect fatigue driving. First, the image is processed to separate the skin color regions in the YCbCr space; second, in the facial area, the positions of the eyes and mouth are roughly located, and then the positions of the eyes are accurately located and the feature parameters of the eyes such as the degree of The Closure of Eye (TCOE) is extracted; third, the geometrical connection lines between the five facial organs are used to extract the feature parameters of the posture of the head, then the extracted parameters and the improved SVM are combined to make classification, thereby judging the degree of fatigue driving of the drivers.

Existing studies on fatigue driving detection are mainly divided into the following three categories: first, the biomedicine-based detection method, which is proposed by Balasubramanian and Adalarasu [2] in 2007 in their research which determines the onset of fatigue by analyzing biological signals, e.g., the pressure, breathing rate and oxygen debt can be used to estimate the onset of fatigue and the recovery time. Second, the information fusion-based detection method, which is proposed by Wang et al. [3] in their research that combines EEG recognition with the operating features of the vehicle to detect driver fatigue. Third, the machine vision-based detection method, which is proposed by Devi and Bajaj [4] in their research in which a system that uses facial image analysis to warn drivers of fatigue and prevent traffic accidents was constructed.

2. A Fatigue Driving Detection Model Based on SVM

The data collected in this paper is a video clip of the driver during simulated driving recorded by a camera, the video data was subject to framing processing, and the features of the eye status and head postures of the driver were extracted from each frame of the video and taken as the feature parameters of fatigue driving; at last, the improved SVM was applied to judge fatigue driving, and the specific process is shown in Figure 1. 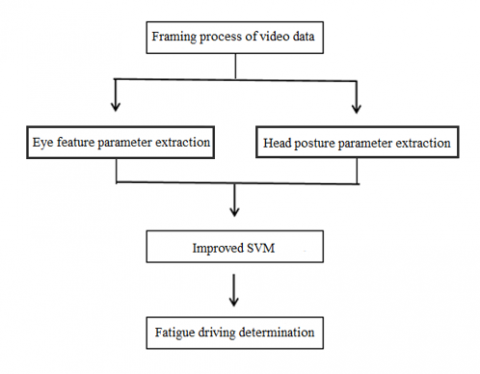 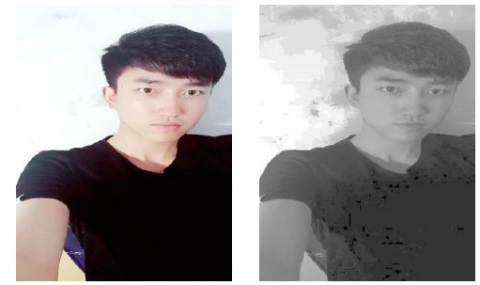 Compared with the complex natural background in the driving cab, the color information of the human face is quite different, so this difference can be used to distinguish the skin color region from the background region [5]. This paper chose to perform it in the Ycbcr color space, so that face detection could be performed better and faster.

This paper used the AdaBoost algorithm based on Haar-like feature rectangle for face detection. Adaboost is an iterative algorithm, its core idea is to train different weak classifiers for the same training set, and then combine these weak classifiers to form a strong classifier [6]. Haar-like features can be used to represent grayscale changes in local areas of the image [7] and enhance face features, therefore, some of the human face features can be described and represented by Haar-like features, then, the cascade classifier in the AdaBoost algorithm can be used to select the most useful features from the huge amount of rectangular features to construct the final strong classifier.

According to the prior knowledge of the proportion of human face (the human face can be vertically divided into three equal parts according to the width of the forehead, and horizontally divided into five equal parts according to the length of the eye), we can roughly decide the positions of the human eyes to be between about one-third and two-thirds of the face in the vertical direction, and between about two-fifths and four-fifths of the face in the horizontal direction. As shown in Figure 4. 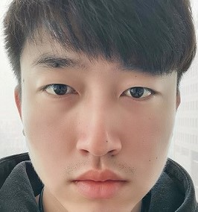 (a) The original image 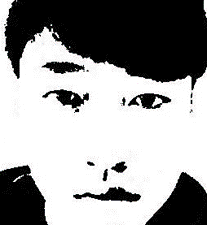 (b) The processed image

The vertical greyscale integral projection function is as follows:

The horizontal greyscale integral projection function is as follows: 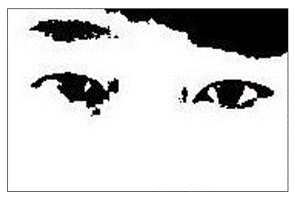 Since when applying greyscale integral projection method to determine the positions of the human eyes, we can only get the approximate regions of the eyes and the binary image will be disturbed by factors such as light, hair, and eyebrows, etc., therefore, based on greyscale integral projection, this paper adopts the Hough transform detection algorithm to accurately locate the eyes.

Under normal conditions, the pupils of human eyes are generally considered to be precise circles, so if we can find the centers of the two circles in the face image, then we can accurately locate the eyes. The Hough transform algorithm is often used to describe the shape of the boundary of a region, and it is not easily affected by noise or edge discontinuities [9]. Therefore, for pupil contour detection, the Hough transform algorithm is a very effective method. First, the Canny operator is used to detect the edge of the image, then after the contour of the pupils has been detected, Hough transform can be used to search for the circles in the detection region.

The basic idea of Hough transform is to map the spatial domain of the detection image to the parameter space, and describe the edge curve in the image with a certain parameter form that most of the boundary points meet; then through the methods of voting and setting up accumulator, it simplifies the complex problem in the image space to local peak detection problems. The specific process is:

A: First, according to the previously obtained rectangular regions of the left and right eyes, the edge detection is performed, at this time, the Canny operator is used to calculate within the regions;

B: After completing the edge detection of the image, the image is subject to binarization, in this way, the radius of the pupil circle can be determined;

C: Next, the Hough matrix needs to be initialized. First, the accumulator array M is initialized, and the pupil circle parameter lists are all set to 0;

D: Then, draw circles with a radius of r in the rectangular regions of the left and right eyes, detect their edge, and obtain the coordinates of the boundary points, after that, we can obtain the value of $M\left(x_{i}, y_{j}, r\right)$  according to the equation of the circle.

E: Finally, the maximum value of the accumulator in M needs to be calculated, that is, to obtain the coordinates of the center points of the pupil circles. 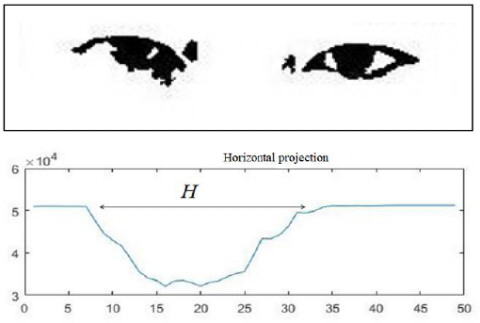 Obtain the width W and height H of the human eyes, by calculating the width-height ratio of the eyes we can determine the TCOE, assume TCOE is λ, then there is:

This paper set the threshold of TCOE to be 50%, that is, when TCOE exceeds 50%, it’s considered that the driver’s eyes are in a closed state, namely:

Blink frequency refers to the number of times the driver blinks within per unit time, and the driver's blink frequency can reflect the degree of fatigue of the driver to a certain extent. Assume in the image of previous frame, the human eyes’ $\frac{\lambda^{\prime}}{\lambda}>50 \%$ , if in the current frame, the human eyes’ $\frac{\lambda^{\prime}}{\lambda} \leq 50 \%$ , then it’s considered to be a blink.

The driver’s head posture can be used as an important parameter to determine whether the driver is fatigued or not. This paper estimates the head posture by calculating the angle of the facial feature triangle, which is mainly based on the geometry of the face. Under certain conditions, it is believed that the face posture will change with the position deviation of the facial feature triangle. First, the greyscale integral projection algorithm was used to determine the position of the mouth, then with the eyes and the mouth as the three vertices, a feature triangle was constructed as shown in Figure 9. At this time, to roughly estimate the face posture parameters, we only need the coordinates of the three vertices of the feature triangle [12]. 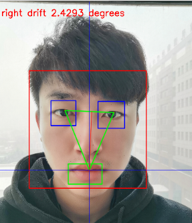 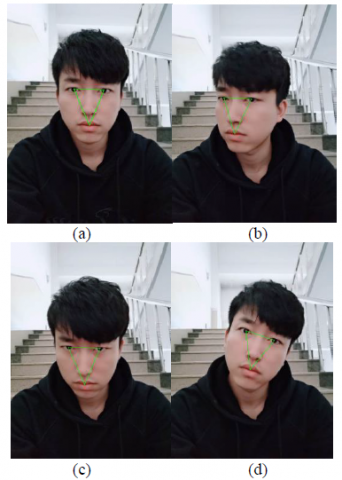 The corresponding Lagrange function is as follows:

where, αi≥0 and βi≥0 are the Lagrange multipliers.

Take the derivative of w, b, and ξ, respectively, we can obtain:

Let the equations in (9) be equal to zero respectively and introduce them into equations (8) to obtain the dual problem as follows:

Finally, the corresponding decision function formula is obtained as:

where, K(xi,xj) is the kernel function, which converts the inner product on a high-dimensional space into a simple function calculation on a low-dimensional space. Here we adopt a Gaussian kernel function $K\left(x_{i}, x_{j}\right)=\exp \left(-\frac{\left\|x_{i}-x_{j}\right\|^{2}}{2 \sigma^{2}}\right)$ , σ is the width of the Gaussian distribution.

The eye status and head posture extracted above are taken as parameters and combined with the fuzzy SVM to determine the driving fatigue.

The output parameter of the fatigue driving judgment model is the fatigue driving degree, which is divided into 3 levels, respectively are: level-A (sober), level-B (slight fatigue), and level-C (severe fatigue). Below is a comparison of the experimental results of ordinary SVM and improved SVM.

Three sets of experimental data were extracted to test the results of the ordinary SVM and the improved SVM. The three sets of data were the eye status feature parameters and the head posture feature parameters extracted within ten seconds under the sober status, slight fatigue status and severe fatigue status during the simulated driving, wherein each data set had 100 male data.

The comparison of the two sets of experimental results shows that, in terms of fatigue driving determination, the fuzzy SVM can make better judgement than the traditional SVM.

This paper conducted an in-depth and detailed research on fatigue driving. By examining the features of the eyes and the head of the driver, it extracted feature data and conducted statistical analysis on the extracted feature data to judge the fatigue status of the driver. The study applied improved SVM to fatigue driving judgement, compared with the traditional PERCLOS criterion based on eye status, the proposed method in this paper added head posture parameters, and it has higher accuracy and application value.