Intelligent video surveillance is a cutting-edge video technology that extracts and screens the abnormal behaviors within the video in real time, and issues early warnings without any delay. Compared with conventional surveillance technologies, intelligent video surveillance not only supports passive monitoring, but also achieves active control of abnormalities. To realize deep mining and quick search of video contents, the technical enterprises in China are competing to develop core technologies (e.g. digital signal processing and video analysis algorithms), especially the automatic identification of the attributes of specific items in video.

The license plate recognition is essentially to detect a target in the image. During the recognition, the first step is to judge whether the target exists in the video. If the target presence is confirmed, the target should be differentiated from non-region of interests, and be positioned accurately. In recent years, deep learning has become a hotspot in the field of image recognition, thanks to the in-depth research into human neural network. A typical deep learning algorithm is the convolutional neural network (CNN) [2]. With a deep network structure, the CNN contains a series of operations, ranging from convolution to pooling. The emergence of regional CNN (R-CNN) [3] and Over Feat [4] in 2013 marked the dawn of deep learning-based image target detection. The relevant algorithms include Fast R-CNN [5], Faster R-CNN [6], Single Shot Multi Box Detector (SSD) [7], You Look Only Once (YOLO) series [8~10], and the latest method Pelee. In less than five years, deep learning-based image target detection has evolved from two stage to one stage, from bottom-up only to top-down, from single scale network to feature pyramid network, and from the PC-end to the mobile-end. All these algorithms boast excellent detection performance on open target detection datasets.

Based on K. Zhang’s concatenated neural network [11, 12], this paper designs a three-level concatenated CNN (CCNN) with multi-task learning ability. The innovation lies in the three-level structure of the CCNN. The first level selects the candidate window of the vehicle in the video, using the network model You Look Only Once, Version 3 (YOLO v3) [13]. The second level extracts the license plate with three CNN models. The third level accurately positions the four key points of the license plate with six CNN models, and then outputs the license plate.

The network architecture is a three-level CCNN, with several CNN models on each level. On the first level, the YOLO v3 target detection algorithm is introduced to detect and classify the vehicle features in each frame of the video. The classification results are inputted to the next level. On the second level, the license plate is roughly detected by three CNN models, outputting the key points of the license plate. On the third level, six CNN models make accurate detection of the license plate based on the key points. The structure of the CCNN model is illustrated in Figure 1.

Figure 1. The structure of the CCNN model

The YOLO algorithm has a simple structure and makes prediction based on the global information of the image. The core idea is to take the entire image as the network output, and directly regress the position and class of the bounding box on the output layer.

In the YOLO v3, the Darknet-53 feature extraction network uses a 53-layer CNN, which is superposed by multiple residual

Figure 2. The structure of Darknet-53

The structure of Darknet-53 is shown in Figure 2, where DBL (conv+BN+Leaky ReLu) is the basic unit of YOLO v3. For YOLO v3, Bayesian network (BN) and Leaky Rectified Linear Unit (ReLU) are indispensable from the convolutional layer (conv), except that in the last layer. The three elements form the smallest component of the YOLO v3. The “resn” indicates the number (“n”) of residual units (res_units) in the residual block (res_block), a large component of YOLO v3. Drawing on the residual structure of ResNet, YOLO v3 enjoys a deeper network structure than YOLO v2 (darknet-53 vs. darknet-19), which does not have the residual structure.

Mimicking the structure of residual network, the YOLO v3 is a deep network capable of multi-scale detection. The network boasts an exceptionally high mean average precision (mAP), especially on small objects. Judging by COCO mAP-50, the YOLO v3 can complete the detection 3 or 4 times faster than the other models (Table 1). Figure 4 is the vehicle detection results of the YOLO v3 model on our dataset. 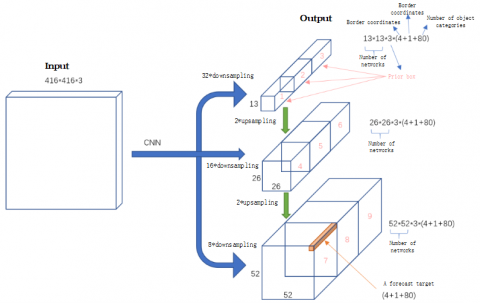 Table 1. Performance comparison between YOLO v3 and other networks

Figure 4. The vehicle detection results of the YOLO v3 model on our dataset 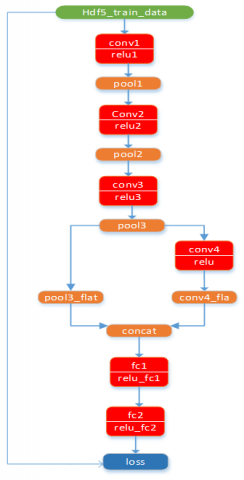 As shown in Figure 3, the forecast results after the training of level 2 (the red points in level 3) were not as accurate as the manually marked blue points. To solve the problem, the forecast position of each key point was inputted to the CNN models of level 3 to further reduce the detection scope of the key points. 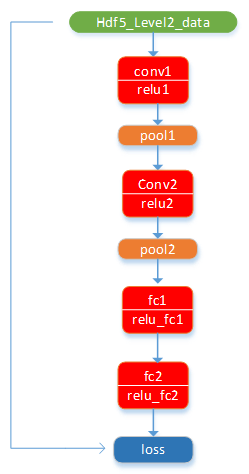 Six simplified CNN models were designed for level 3, based on the rough detection of the key points in the license plate image. As shown in Figure 6, each model has two fewer convolutional layers and one fewer max pooling layer than that on level 2. In addition, the two datasets of each key point are trained separately by two CNN models. Thus, there are a total of 8 CNN models on level 3. Then, the forecast values of each key point are averaged, completing the accurate positioning of the four feature points in the image. The black points in Figure 1 are the key points estimated by level 3, which basically coincide with the manually marked blue points.

The experimental data were collected from two sources: a library of the images extracted by OpenCV from surveillance video, and the open-source license plate database (3,000 images). The images with limited changes were eliminated, leaving 8,000 images. These images were divided into a training set (6,000 images) and a test set (2,000 images). Due to the resolution difference between video clips, the acquired images were of two sizes: 1,080c×720 and 1,920×1,080.

The image data are often enhanced before image classification, because deep learning has a strict requirement on the size of dataset. If the original dataset is too small, the network model cannot be trained sufficiently, thus affecting the model performance. In this paper, the original dataset is expanded by rotating, scaling, cropping and translating the image files.

Considering the network structure of level 2 (rough detection of key points on license plate), 6,000 images were allocated into the training set and 2,000 into the test set. The network training was carried out in batches, each of which contains 32 images (140*180). In each batch of training, the weights were optimized, and the Euclidean distance between the forecast and actual key points, i.e. the loss, was computed. The initial learning rate was set to 0.01. After every 1,000 iterations, one test was conducted using the test dataset.

The training losses of level 2 and level 3 are displayed in Figures 8 and 9, respectively. It can be seen that both levels witnessed a decline in the loss with the increase in the number of iterations. For level 2, the mean loss of the four key points fell between 0.8 and 0.9, after 10,000 iterations of the training dataset. For level 3, the loss gradually approached the interval of 0.4~0.5 after 10,000 iterations. The mean loss of level 2 was greater than the loss of level 3. This means the CCNN can enhance the positioning accuracy of key points on license plate, through the combination of rough detection and accurate positioning. 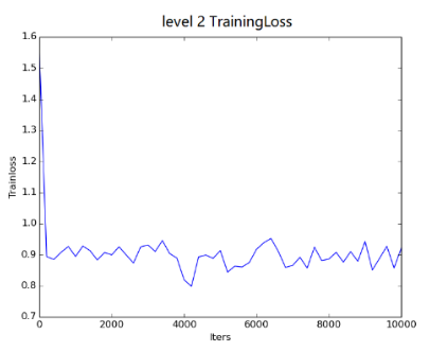 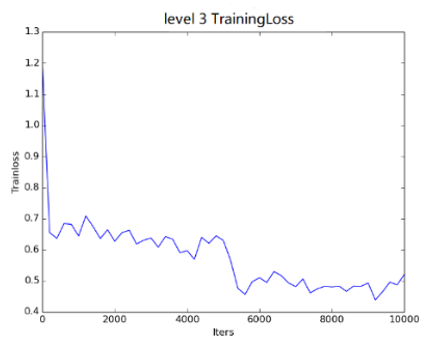 On level 2, the positions of the four key points were forecasted by the trained model, and the errors between the forecast positions and manually marked positions were calculated. Next, the errors on level 2 were compared with those on 3 (Figure 10). The comparison shows that the error of each key point on level 2 was greater than that on level 3. This further confirms the CCNN’s ability to accurately position the key points. 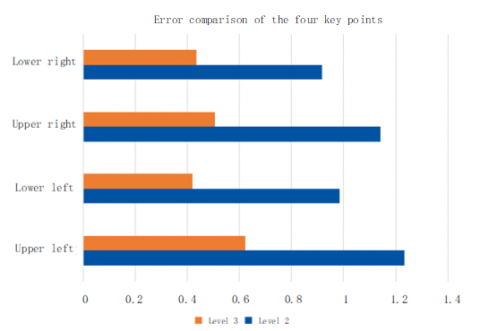 Figure 10. Comparison between the errors of key points on level 2 and level 3