There is only one normal depth for a given situation of channel geometry and discharge. The normal depth is typically calculated using Manning's Equation, which requires an iterative solution to compute this depth in circular channels. Simultaneously, many methods were utilized for computing the critical depth, for instance, the Algebraic method, Graphical method, Design chart, Numerical method, Bi-section method, Newton Raphson method, and Semi empirical approach [3].

Due to governing equations' implicit nature, a direct solution for normal and critical depths is not feasible [4, 5]. Thus, the researchers proposed developing a computer program to avoid repetitive computations. Trial procedures and graphical methods are currently used to determine the critical depth [6-8]. An explicit solution for critical depth and normal depths in circular and different shape channels was established based on regression equations that improved the equations' accuracy and increased their complexity [9]. Recently, three explicit solutions for critical depth in circular, arched, and egg-shaped sections are driven [10]. Other researchers focused in their studies on finding an explicit solution for calculating the critical depth and normal depths of non-circular section open channels, such as trapezoidal, parabolic, ovoidal, and horseshoe shapes [11, 12]. These formula forms are simple, and the physical concept was obvious. However, these formulas have a significant percentage of error compared to the exact solution. On the same level, other formulas presented accurate results, but they require much effort and time to calculate the critical depth [7, 13, 14].

An investigation of the literature confirmed that a direct solution for normal and critical depths has a significant development in recent times. However, none of the reviewed studies addressed this work's core motivations. Therefore, this research is presented herein to explicitly calculate the normal and critical depth in circular channels to address this gap and find simple, fast, and accurate equations.

Considering Figure 1 for a partially filled circular channel section, the discharge Q carried by this channel using Manning's Equation is: 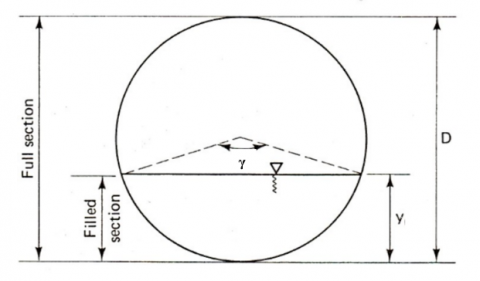 where, D is channel diameter, γ is water surface angle in radians (which depends on the flow depth yn), n is Manning's roughness coefficient, S is the bed slope of channel, and h=yn/D.

Eq. (7) is an implicit equation, as the depth of flow can be found by the trial-and-error method.

The critical flow condition in a circular open channel is described by the following relationship [2].

where, α is the energy correction factor and g is the acceleration due to gravity.

Substituting for A and T from Eqns. (2) and (5), for critical condition, into Eq. (8) yields the following dimensionless form:

For calculating the critical depth in the circular channel, Eq. (10) must be solved. Eq. (10) is also implicit and can be solved by the trial-and-error method. Many researchers have suggested several explicit solutions for solving this problem.

In this paper, specific and explicit equations were derived for finding the critical and normal depths of the circular channels by statistical analysis depending on the dimensional analysis theory and curve fitting method, respectively. The methodology starts by computing the channel's discharge for many different geometries. Six different diameters of the circular channel D were used (0.5, 1, 1.5, 2, 2.5, and 3m). For each diameter, five different values of Manning's n (0.01, 0.015, 0.02, 0.025 and 0.03), four longitudinal bed slopes of the channel S (0.01, 0.001, 0.0001 and 0.00005), and eighteen normal depths yn were used. For each case, the discharge Q was calculated using Manning's Equation (Eq. (7)), and then the parameter ε and critical depth yc was calculated by trial-and-error method. The number of generated data of discharge versus critical and normal depth reached 2160 cases.

Dimensional analysis is a widely reliable tool for recognizing physical quantity relationships' knowledge structure in a detailed and consistent manner. It all begins because descriptive quantities in quantitative natural science have dimensions and can be divided into fundamental and derived quantities accordingly [15-19]. In this article, dimensional analysis was used to propose an analytical equation for measuring the circular channels' critical and normal depths.

Eq. (10) shows that the critical depth yc in the circular channel depended on the following variables:

g=Acceleration due to gravity (LT-2).

By applying the Π theorem, the following dimensionless parameters produce:

As shown in Eq. (7), the possible variables affecting the normal depth of flow yn through the circular channel are:

The following dimensionless terms can be derived from the above Equation using the Π theorem:

A statistical analysis and curve fitting were conducted as part of this study. Non-linear regression of the generated data was conducted using the IBM software SPSS Statistics to define an empirical model equation in line with the functional equation obtained by dimensional analysis.

The critical depth of flow across a circular channel was proposed using statistical analysis. The dimensionless parameters (ηcc, εc) of Eq. (10), which resulted from generated actual data, were first ordered in descending order, and then about two-thirds of them were included in the SPSS program.

The proposed Equation for critical depth is:

Figure 2 shows the comparison between the remaining one-third generated critical depth data to the calculated critical depth from the above-proposed Equation. The coefficient of determination R2 of this relationship is equal to 1. 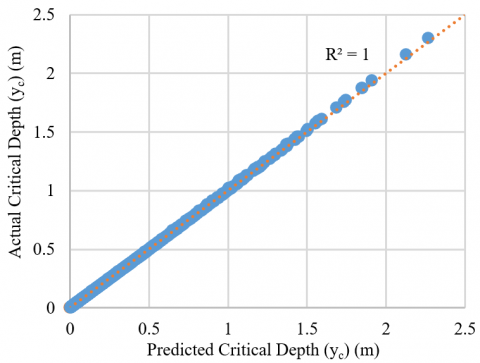 Figure 2. Relation between the actual and predicted critical depth of a circular open channel

Also, an empirical formula was developed, Eq. (18), to compute the critical depth in a circular open channel that depends on the conduit's geometrical data.

Figure 3 shows the relation between the measured critical depth and that predicted from Eq. (18). The coefficient of determination R2 of this relationship is equal to 1. 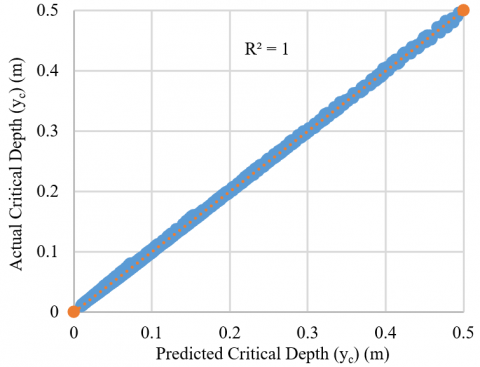 Figure 3. Relation between the actual and predicted critical depth of a circular open channel

Figure 4 shows the dimensionless critical depth from the proposed equation and the actual critical depth through a circular channel. It can be seen a remarkable match between the expected and actual results. 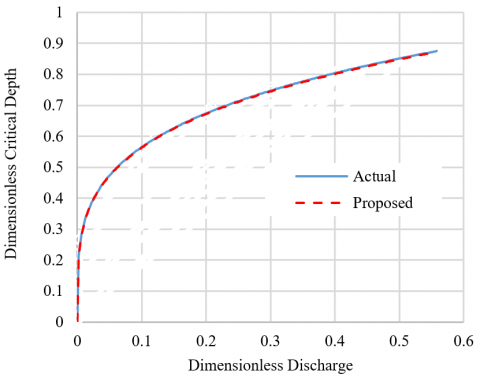 As mentioned above, the curve fitting method was utilized to establish an explicit equation for computing a normal depth of flow through circular conduits. Two equations are offered herein for calculating the normal depth in the circular channels depending on the value of the dimensionless normal depth $\eta_{c}$. The first equation is applied within limits of $\eta_{c}$ ranging from 0.003 0 to 0.25 or dimensionless discharge βc less than 0.043. The second equation applies to values of $\eta_{c}$ more than 0.25 to 0.82 or βc equal or more than 0.043. These two equations are:

The above two equations demonstrate the simplicity and fast at which they can find the normal depth. Their error ratio is approximately equal to zero when the results are compared to the actual depths. Table 2 shows the maximum relative error of the established equations compared to previous studies [9]. 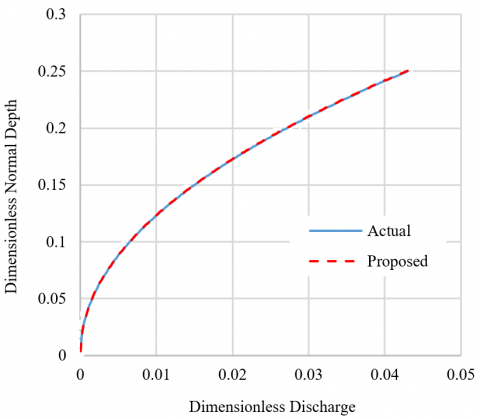 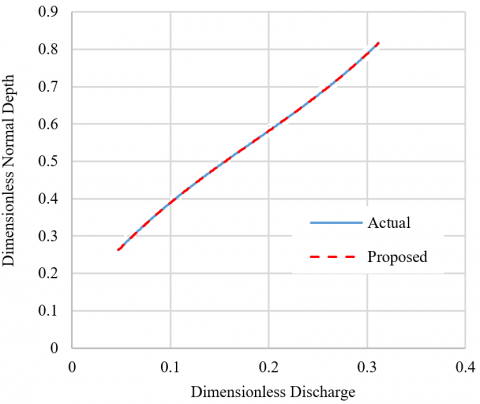 Furthermore, the results from Eqns. (20) and (21) in comparison to actual data are illustrated in Figure 5 and Figure 6, respectively.

An extensive dataset for discharge versus critical and normal depths was generated in this study. Then, specific and explicit equations were derived for finding the critical and normal depths of the circular channels by statistical analysis depending on the dimensional analysis theory and curve fitting method, respectively. Clearly, the proposed equation offers the simplest, practical, and accurate results compared with other earlier solutions.

While the proposed equation's assessment for measuring the critical and normal depth in circular channels was examined in this work, further investigation needs to be carried with sets of experimental datasets to provide must needed insight for the validity of this proposed equation.