Since its inception in 1966, rare earth permanent magnets have become important basic functional materials to support industrial development with their excellent properties, which is closely related to the development of social science and technology [1]. As the latest generation of rare earth permanent magnet materials, NdFeB permanent magnets were developed in 1983. It has been widely used in many fields such as information communications, consumer electronics, energy-saving home appliances, wind power generation, artificial intelligence for new energy vehicles, and aerospace [2-4]. But, the composition of the NdFeB permanent magnet material and the defects on the surface during the firing process cause it to be easily corroded during use. Meanwhile, its Curie temperature is relatively low and sensitive to temperature. Thus, the reduction the magnetic properties of NdFeB magnet, the poor corrosion resistance and temperature sensitivity severely restrict its development [5, 6].

At present, improving the corrosion resistance of NdFeB permanent magnet has become a hot spot of research. NdFeB corrosion resistance is mainly improved by adding alloy materials to change the chemical composition of the magnet and balance the potential difference, or forming a protective layer on the surface of the magnet to isolate the permanent magnet from the corrosive environment. The former method with the addition of alloys to the NdFeB will damage the magnetic properties of the permanent magnets, and the latter using protective layers is considered the most promising method. The protective layer is prepared mainly by electroplating [7], electroless plating [8] and physical vapor deposition. Considering the defects of other preparation methods such as secondary corrosion and weak aging resistance, the physical vapor deposition technology with the characteristics of strong film-base bonding, high film quality, and less production waste is called the most promising protection technology in the future. Among the protective film layers formed by this technology, metal films such as Al, Ti/Al, Al/Al2O3, TiN, and Ti are widely used in the field of NdFeB corrosion protection [9-11].

Due to the advantages of high hardness, acid and alkali resistance, etc., TiN is widely used as a protective film. However, the single-layer TiN film is prone to defects such as pinholes and through holes during the deposition process. These defects will cause the corrosive medium to enter the substrate, and reduce the protective effect of the film on the substrate. In view of this, the authors attempts to form a (TiN/Al2O3)n protective film by adding an Al2O3 layer and alternately depositing TiN and Al2O3 layers on the NdFeB surface. This paper mainly studies the effect of the changes in the cycles of multilayer film on the structure, surface morphology, corrosion resistance and magnetic properties of TiN/Al2O3 composite multilayer films.

In this experiment, a commercial 45H unmagnetized permanent magnet produced by by Shenyang General Magnetic CO., LTD. was used. The sample size was 22×9×2 mm. Before depositing the protective film, use the sandpaper to polish the substrate to 2500# step by step, and then apply a polishing machine to polish it to a mirror-like surface and remove the oxide film on the sample surface. Afterwards, put the polished substrates into acetone and alcohol successively for 15 minutes of ultrasonic cleaning, dry them with a blower, and quickly move them into the vacuum chamber.

A sputtering system combining ultra-high vacuum magnetron and ion beam was used to deposit TiN film on the cleaned substrate. During the deposition process, the substrate vacuum was 1×10-3Pa; the target materials were Ti and Al2O3 with a purity higher than 99.9%; the Ar/N2 ratio was 30/2 when depositing TiN. Before depositing the film layers, the target materials were pre-sputtered for 15min to remove impurities on the surface. The specific process parameters during the film deposition are shown in Table 1.

Figure 1 shows the FESEM morphology of the (TiN/Al2O3)n multilayer protective film (i.e., D1, D2, D3, and D4) deposited on the NdFeB permanent magnet with cycles n (2, 4, 10, and 20). From the film surface, it’s found that when the number of cycles was small, there were more particles on the surface of the single layer film, which leads to many cracks in the upper film layer. With the increase of the cycles, there were fewer large particles on the film surface and the cracks disappeared, but the large dents appeared on the top film layer. The macroscopic and microscopic surface morphologies of each layer showed that with the continuous increase of the cycles, the particles on the film surface gradually decreased, the porosity was reduced, and the film surface gradually became dense and flat. The 20 layers of (TiN/Al2O3)n multilayer film is flat and dense, and the surface of the film layer is smoother with fewer protrusions, which is related to the crystallinity of TiN columnar crystals. 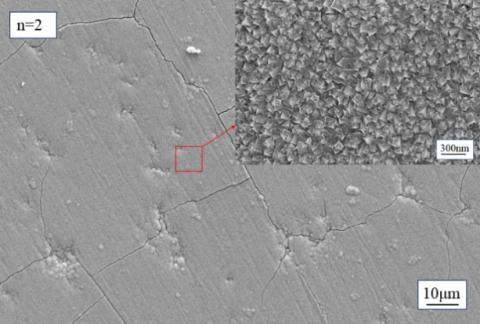 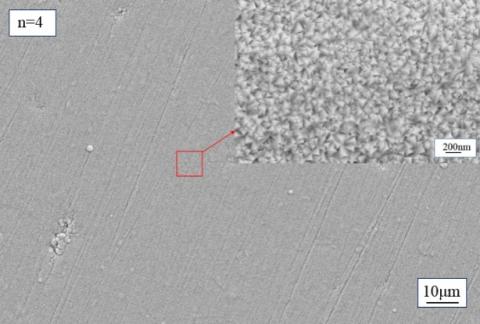 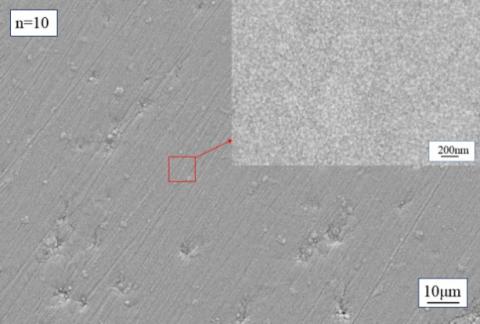 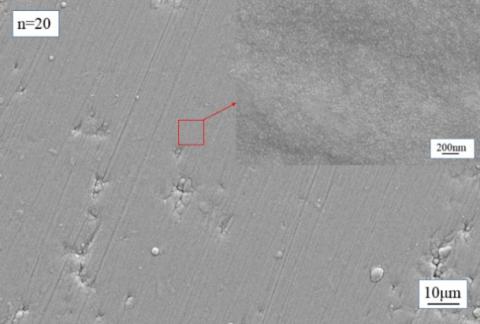 Figure 1. Surface morphology of (TiN/Al2O3)n multilayer films deposited on the surface of NdFeB with different number of film layers

Figure 2 shows the x-ray diffraction pattern of the samples prepared under different modulation cycles. Compared with the standard PDF card, TiN (111), (200), (220) and (311) characteristic peaks appear almost in all the film layers. The test results of all film layers were compared to find that with the number of modulation cycles decreasing, the preferred orientation of the (111) plane of the TiN film gradually increased; with 2 modulation cycles, its preferred orientation is the most significant. Although the multilayer film structure cannot alter the preferred orientation of the film layer, it can change the properties. The increase in the number of modulation cycles leads to a decrease in the diffusion distance of the defect, which makes it easier for the stress accumulated by the defect to cross the interface and be released, thereby reducing the stress accordingly. In addition, the periodic insertion inhibits the longitudinal growth of the crystal grains in the film layer and releases the stress accumulated therefrom. Therefore, as the number of cycles increases, the stress in the film layer gradually decreases, the ratio of the strain energy to the surface energy is reduced, and the surface energy of the film gradually increases. Then, the (200) surface peaks with the lowest surface energy gradually increase, which is consistent with the results of the surface morphology of each film in Figure 1. 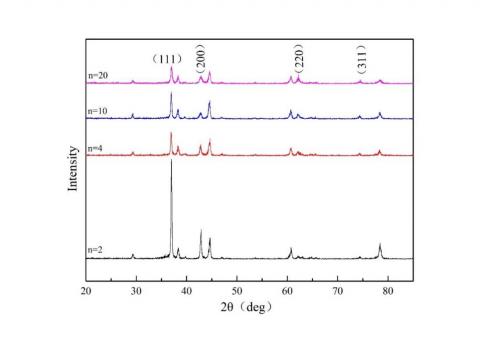 Figure 3 shows the potentiodynamic polarization curve of the (TiN/Al2O3)n multilayer film in 3.5% NaCl solution. Table 2 lists the electrochemical fitting parameters of the samples in 3.5% NaCl solution calculated by Tafel extrapolation. It can be seen from Figure 3 that the potentiodynamic polarization curve of the coated sample is below that of the uncoated sample, indicating that the film layer protects the NdFeB substrate, while the uncoated sintered NdFeB solution exhibits active dissolution characteristics, and the electrode potential rapidly increases with the current density. This is mainly because the surface of sintered NdFeB presents more micropores during the preparation process, and the corrosive solution enters the interior through the micropores to cause rapid electrochemical corrosion. 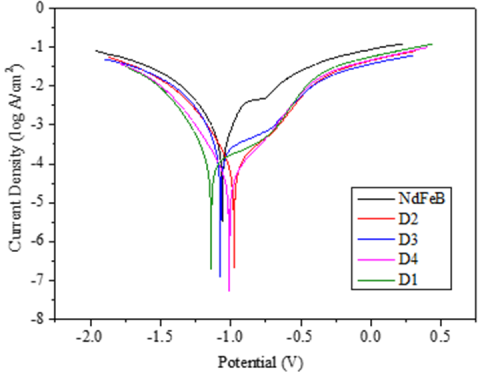 The calculation results in Table 3 showed that the self-corrosion ionization density of samples D1, D2, D3, and D4 were all one order of magnitude lower than that of the uncoated sample; the self-corrosion potential of sample D4 was -1.00947V, and that of uncoated sample was -1.06039V, moving right 50.92mV. From the test results of the five groups of samples in the table, it can be seen that the (TiN/Al2O3)n multilayer film has a protective effect on the NdFeB substrate, and the sample D4 had the most significant protective effect; self-corrosion current density was reduced by 200 nA/cm2 compared with the uncoated sample; the sample D1 has the weakest protection to the substrate. The improvement in the corrosion resistance of the (TiN/ Al2O3)n multilayer film improves attributes to the well-bonded interface. The porosity of this multi-layer film is lower than that of the single-layer, because the through-hole structure from the surface to the substrate will be interrupted by repeated nucleation at the interface [13]. At the same time, due to the alternate deposition of TiN film and Al2O3 film, the quality of the film is continuously improved, the nucleation rate of the surface film is greatly increased, the film grain is relatively small, and the film is relatively dense to be the top layer film of the first barrier of the substrate that isolates the corrosion solution from entering the substrate. These characteristics will effectively isolate the corrosive environment.

The top layer material of the corrosion protective film has a great effect on the corrosion protective efficiency. In order to verify this effect on the protective efficiency of the NdFeB substrate, the results above were compared with the corrosion protective layer with a film cycle number of 20 and the top material of Al2O3. Figure 4 shows the potentiodynamic polarization curves of samples with different quality of the upper layer film deposited on the NdFeB substrate with the same number of cycles in 3.5% NaCl solution. Table 4 lists the obtained electrochemical parameters. It can be seen from the figure that the sample D5 with the outermost film layer of Al2O3 material had a higher self-corrosion potential than the uncoated sample and sample D4, i.e., -0.942215V, which is 118.17mV higher than that of the uncoated NdFeB -1.06039V; the self-corrosion current density was 4.2539 10-5 A/cm2, which is nearly an order of magnitude lower than that of the uncoated sample 2.1768 10-4 A/cm2, but it’s higher compare with the self-corrosion current density 1.7658 ×10-5 A/cm2 of D4 with the same number of cycles, indicating that under the same number of cycles, the material of the upper film layer is related to the protective efficiency of the film layer on the substrate, and the upper film layer TiN has a better protective effect on the NdFeB substrate than Al2O3. The test results were related to the surface morphology of the film. The grains of the TiN film are small, compact and smooth, while the Al2O3 film is rather rough, increasing the contact area with the corrosive medium, and prone to some defects such as a certain amount of micropores, which will affect the protection efficiency of the corrosion protection layer to the substrate. 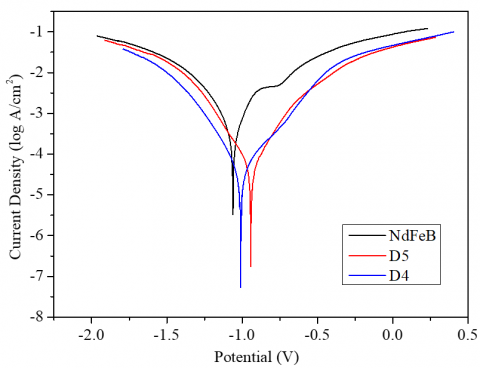