The accuracy of swing angle directly bears on the machining performance of computer numerical control (CNC) machine tools. Any error in the swing angle will greatly affect the machining quality. In actual engineering, it is very important to compensate for the angle error in the machine tool. This paper attempts to design an effective method to compensate for the swing angle error in special-shaped rock turning-milling machining center HTM50200. Firstly, the commonly used swing angles of the tool axle were measured, and fitted into curves through polynomial regression. Based on the fitted curves, the error between the theoretical and actual swing angles was obtained and corrected, and the change law of the angle error was derived. After error compensation, the actual swing angle was measured again for verification. According to the measured results, our error compensation technique greatly enhanced the rotation accuracy of the swing axle, and mitigated the effects of swing angle error on machining accuracy. This research breaks new ground for the development of high-end high-precision rock machining equipment.

Computer numerical control (CNC) is the automated control of machining tools by means of a computer. Thanks to technological progress and the application of Internet technology, CNC machine tools have developed into the most basic units in modern manufacturing. Facing the increasingly high accuracy requirements, high-precision, high-intelligence, and networking are the major design trends of CNC machine tools [1].

In recent years, the accuracy improvement of CNC machine tools has become one of the hot topics in the industry of manufacturing equipment. With the transformation and upgrading of manufacturing and rock processing industry, there is a surging demand for special-shaped rocks and rock products (e.g. rock borders and pillars of various sections). As a result, the need for high-end CNC machine tools continues to increase [2].

Compared with the instrument-based measuring method, the cutting test piece can accurately reflect the geometric accuracy of the swing axle on CNC machine tools. For instance, Jiang et al. [15] analyzed the performance and identified the error of a CNC machine tool based on S-shaped test pieces. However, the relevant research findings have not been widely applied in engineering.

In China, the positioning accuracy/error of swing angle in five-axis machining centers is measured/compensated for, using expensive laser measuring systems. There is not yet a n automated, easy-to-use, low-cost measuring system. The common measuring instruments include 360-tooth division plate on standard turntable, laser interferometer etc. [16]. Among them, the laser interferometer can accurately measure straight lines and small swing angles, but performs poorly if the swing angle is equal to or greater than positive and negative 90°. The other methods are too complicated for automatic measurement [17].

In actual machining, the rotation center of the tool is far from the tool center. Any error in the swing angle of tool axle will greatly affect the spatial position of the tool tip. Focusing on special-shaped rock turning-milling machining center HTM50200, this paper measures the commonly used swing angles of the tool axle, and derives the change law of the angle error of the rotation axle in the machining center [18]. Specifically, the measured data were fitted into curves through polynomial regression. Based on the fitted curves, the error between the theoretical and actual swing angles was obtained, and compensated for. After the compensation, the actual swing angle was measured again. The measured results show that the error compensation effectively improved the rotation accuracy of the swing axle, reducing the effects of swing angle error on machining accuracy [19].

The remainder of this paper is organized as follows: Section 2 briefly introduces the special-shaped rock turning-milling machining center HTM50200; Section 3 proposes our error compensation technique for the swing angle of the engraving and milling (EM) head; Section 4 explains the postprocessing functions of HTM50200; Section 5 puts forward the conclusions.

The five-axis rock machining center can engrave and process large rocks, for its gantry-type frame structure has a large workspace, high stability, and strong rigidity [20]. Compared with other CNC machining techniques, five-axis CNC machine tool boasts a wide applicable scope, and excellent performance in processing parts with complex surfaces. The tool can produce high-quality parts with a high efficiency [21].

The turning module works differently from metal turning. During the turning of metal parts, the workpiece is rotated at a certain speed, while the tool is fixed on the holder; the holder interpolates two coordinates on the turning plane to obtain the outer contour of the workpiece. The turning of special-shaped rocks adopts a different technique from metal turning: the tool is a diamond saw blade rotating around the tool axis; when the contour of the special-shape rock is subject to two-coordinate interpolation on the XOZ plane, the tool and the workpiece move relative to each other at a certain speed. The workpiece-tool speed ratio is smaller than 1, which varies with the properties of the rock [23]. 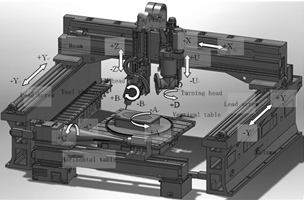 3.1 Cause and compensation method for swing angle error of EM head

During the processing of complex surfaces, HTM50200’s swing angle error mainly comes from the inherent error of the mechanical structure, because the rotation of the EM head is driven by the worm gear of the actuator. Besides, once the tool is installed, the sheer length (500mm) of the swing axle of the EM head will lead to the following situation: Due to the long distance between the rotation center of the swing axle and the tool tip, a small rotation error will cause the tool tip to deviate greatly from the theoretical position.

Before theorizing the change law of swing angle error, the actual motions of the EM head were simplified into a geometric model (Figure 2).

In actual measurement, the tool is a ball-nose cutter with a diameter of 8mm and a length of 700mm. The distance L from the cutter center to the rotation center of the EM head is 577.11mm. Then, the swing angle error and its change law were indirectly derived from the difference between the theoretical and actual vertical positions of the tool tip.

The indirect derivation is not so accurate as professional measuring instruments. But the accuracy is sufficient to reveal the change law of swing angle error. According to the simplified model in Figure 2, the following equation holds:

Then, the relationship between swing angle error and vertical position of tool tip can be obtained as:

Firstly, the change law of h with swing angle θ was observed. The common range ($0^{\circ} \sim 40^{\circ}$) of swing angle in actual processing was divided into $1^{\circ}$ intervals. Then, the following can be derived from formula (1):

Figure 3. The change law of the speed for vertical position increment of tool tip with the swing angle of EM head

To obtain the change law of actual swing angle error with swing angle, the actual position Z3 of tool tip in the space was measured, with the vertical position Z1 as the benchmark, and compared with the theoretical angle Z2. Moreover, the measured data were fitted into curves through polynomial regression, and analyzed to obtain the said change law.

During the swing angle measurement, the actual deviation of swing angle was obtained through geometric calculation based on the spatial coordinates of the center of the reference sphere in contact with the reference plane [26]. The compensation value was preset through software programming or CNC system of the machine tool [27]. Some measured data are listed in Table 1. Every item is the average of repeated measurements.

The position errors of tool tip in Table 2 were fitted into curves through polynomial regression, with x as the swing angle and y as swing angle error. For simplicity, it is necessary to determine the best order of the polynomial [28]. The swing angle error curves fitted by polynomial of the second, third, fourth, fifth, and sixth orders are presented in Figures 4-8, respectively. The fitted curves by different polynomials are compared in Figure 9. Note that the dotted lines are measured data, and the curves are fitted. 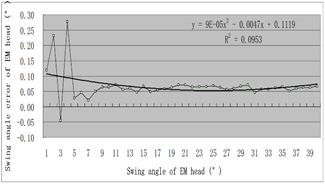 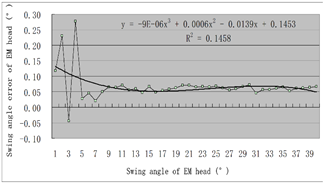 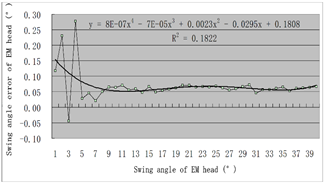 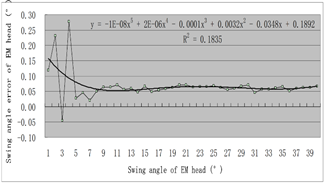 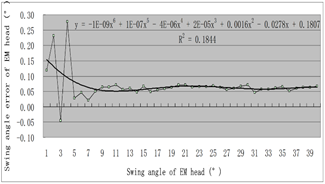 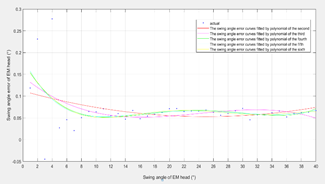 To conform to the expression of the angle and angle error, $y=\Delta \theta, x=\theta$ were substituted into the above formula:

Finally, the actual swing angle can be obtained by:

As shown in Figure 10, the compensation greatly mitigated the error in swing angle. The baseline of the fluctuating fitted curve coincided with the zero baseline, and the range of the error obviously narrowed to -0.06°~0.09°. Therefore, the error compensation reduces the influence of swing angle error on machining accuracy, and improves the quality of the machined parts.

Then, the tool path of a 3D rock sculpture was programmed on computer-aided design/computer-aided manufacturing (CAD/CAM) software, according to our polynomial regression method. The programmed path was adopted for simulation and actual machining [30]. Then, the simulated results were compared with the actual results, proving that our method is feasible and correct.

This work was supported by Liaoning Science and Technology Research Project (Grant No.: 20180550827).