For good thermal conductivity and isothermal characteristic, heat pipes as efficient heat transfer components have been widely used in energy area, etc. Since nanofluids were first developed by Argonne National Laboratory, a series of experimental investigations[1-2] have been conducted, indicating effective thermal conductivity. To strengthen heat transfer, nanofluids can be an optimal choice as heat pipe working medium and a number of experiments have been conducted, such as gravity heat pipes and pulsating heat pipes [3–4]. Experiments showed that compared with pure fluid, nanofluids effectively increase the convection heat transfer coefficient and thermal conductivity, which can significantly enhance heat transfer [5]. Studies also indicated that using different nanoparticles, particle sizes, and mass concentrations can improve the heat transfer performance of heat pipes [6–9]. Shu et al. [10] observed that a high heat transfer coefficient in the mesh heat pipe can be obtained when nanoparticles are used in water. Pang et al. [11] investigated the effect of Cu particle size in a copper wire-bonded flat heat pipe. Another innovative method of improving heat transfer is to explore high thermal conductivity capillary wick[12-13]. Porous copper foam is a structural and functional material that can be used to replace the traditional capillary force wick because of its small proportion, high porosity, and large specific surface.

Some studies have found that heat pipes using porous copper foam not only have excellent isothermal characteristics but also extend the ability to transfer a high heat flux [14-15]. The present study tests a new type of heat pipe developed from the combination of porous copper foam with nanofluids under different conditions.

The capillary wick used in this study was porous copper foam with a 200 pores per inch (PPI) pore density. Three different nanoparfluids, i.e., A12O3, CuO and SiO2, with an average nanodiameter of 35 nm were prepared as the working fluids. The outer diameter and length of the heat pipes tested in this experimental investigation were 10mm and 300 mm, respectively. Figure 1 shows the experimental system used to measure the wall temperature of the heat pipes. The entire system consisted of testing, cooling, measurement, and data acquisition systems. In the testing system, two electric copper rods were inserted as a heater into the copper block as a heater to simulate the supply of heat using the electronic chip. The heat load was controlled by a voltage regulator, displaying a power meter. The cooling jacket made of copper tube was used to cool down the condenser, and water flow rates were controlled by a flow meter with an accuracy of ±4% of full scale. Eight K-type thermocouples with an accuracy of ±0.75% were evenly installed on the outside wall to measure the temperature of the evaporator, adiabatic, and the condenser.

The entire testing system was insulated with asbestos fibers to minimize heat loss.

Three different nonofluids using A12O3, CuO, and SiO2 nanoparticles were prepared using a two-step method [16]. A 0.5 wt% nanofluid mass concentration was used in this chapter to compare the effects on temperature distribution of different nanoparticles. 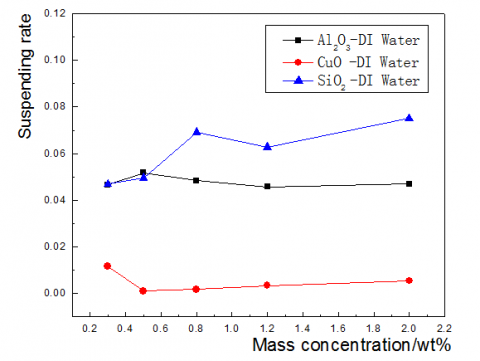 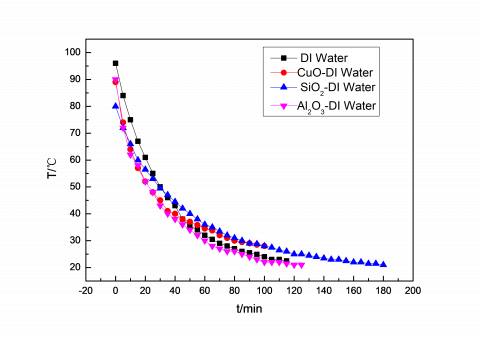 Figure 2. Migration characteristics of the nanofluids: (a) suspension rates, (b) temperature diffusion rates

Figure 2 shows the migration characteristics of the three nanoparticles, their stability, and thermal conductivity. Figure 2a illustrates that the nanofluid suspension rates, which indicate the stability of the nanoparticles, changed with the increase in mass concentration. The suspension rate is observed through the proportion of nanoparticles in nanofluids. Seen from Figure 2a, the A12O3, CuO, and SiO2 nanofluid suspension rates achieved the maximum value at mass concentrations of 0.5%, 0.3%, and 2%, respectively. Under watering-cooling condition, the nanofluids thermal conductivity can be reflected by temperature diffusion rates of the evaporation after the heat pipes are heated. Figure 2b shows that the temperature of all three types of nanofluids decreased as the time increased, but their temperature diffusion rates, which indicate their thermal conductivity, differed. A12O3 had the highest temperature diffusion rate, followed by CuO, and then SiO2. Figure 2 indicates that with the same concentration of 0.5 wt%, comparison of nanofluids stability can be represented as Al2O3 > SiO2 > CuO, and the thermal conductivity can be expressed as Al2O3>CuO>SiO2. 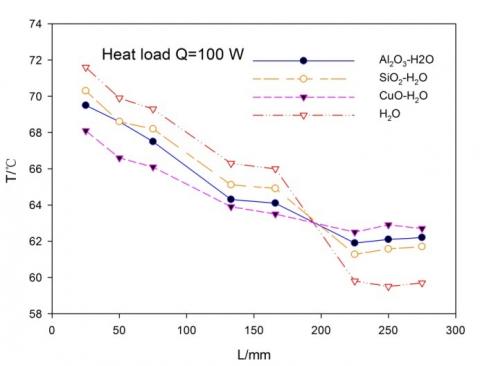 Figure 3. Temperature distribution along the heat pipes with different nanoparticles

Figure 3 shows the wall temperature distribution along the heat pipes with the same conditions of 50% filling ratio and 0.5% mass concentration. At the same heat load of 100 W, the temperature of both the evaporator and the condenser decreased compared with that of pure water. This result means that adding a certain amount of nanoparticles into pure water can enhance the heat transfer performance of heat pipes. Figure 3 illustrates that the temperature and temperature difference over time of the CuO nanofluid heat pipe were the lowest, followed by Al2O3 and SiO2. Combined with the analysis of their stability and thermal conductivity in Figure 2, A12O3 nanofluids were considered the optimal one as heat pipe working medium.

3.2 Effects of the filling ratio on heat transfer performance

The filling ratio refers to the percentage of working fluid that accounts for the evaporation volume. To determine the effects of different nanofluid filling ratios, the heat pipes were tested with various filling ratios and heat loads. 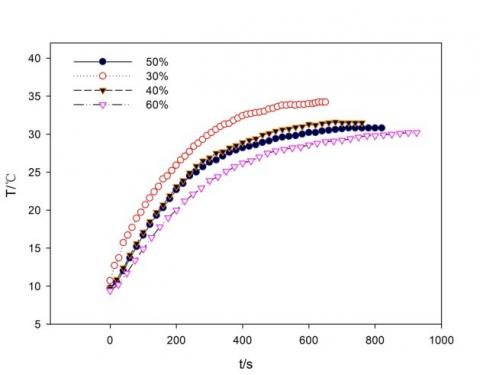 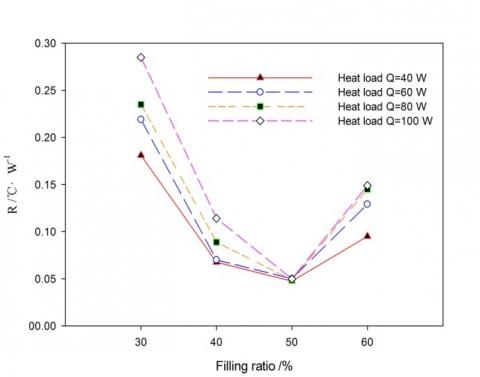 Figure 4. Effect of the filling ratio on the start-up and heat transfer performance, e.g., (a) change in start-up performance over time and (b) the thermal resistance with different filling ratios 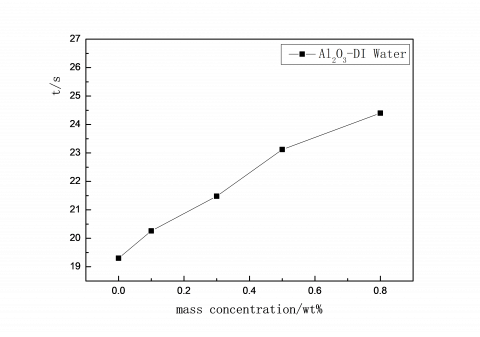 Figure 5. The time that the Al2O3 nanofluids take to flow out with different concentrations 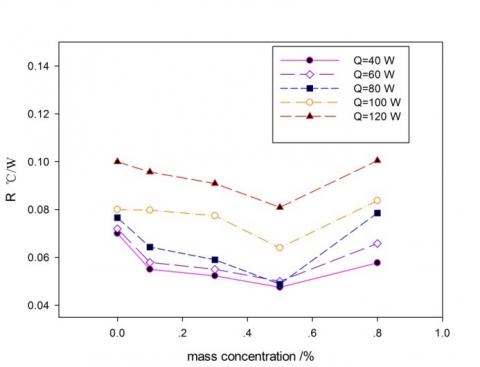 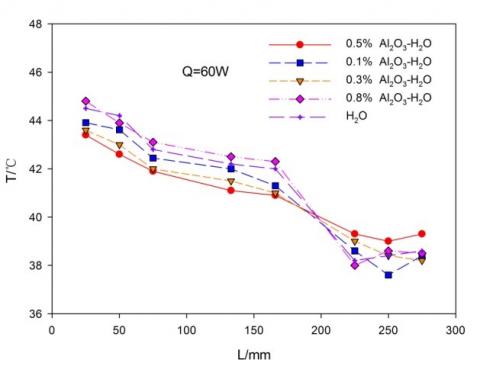 A previous investigation of a porous copper wick heat pipe using Al2O3 nanofluids as the working fluids in the literature [19–20] showed that both the porous copper foam and the nanofluids can significantly improve heat transfer. Furthermore, the combination of these two materials was better than that of mesh wick and DI water. 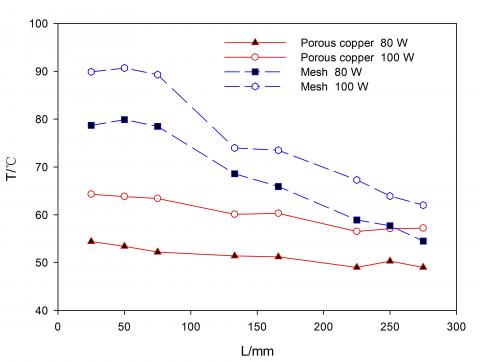 Figure 7 shows that under a certain filling ratio and mass concentration, a 200 PPI porous copper foam wick showed more advantages in terms of both temperature and temperature difference over time than a 200 PPI mesh wick. The conclusions of previous studies indicate that the mechanism by which nanofluids and porous copper foam enhance the heat transfer in heat pipes can be described as follows. On one hand, the addition of nanoparticles can increase the effective thermal conductivity of the base fluid, and the small size effect and the Brownian motion of nanoparticles enhance the energy transfer from the base fluid to the nanoparticles. On the other hand, porous copper foam has a complex 3D porous structure and metallic characteristics. It can provide a large heat transfer area and capillary force, but also can facilitate strong transverse mixing.

The two preceding points are based on the respective advantages of using porous copper foam and mesh wick. The matching of heat transfer in the porous copper foam wick heat pipe with nanofluids is complicated. To further understand the mechanism by which nanofluids enhance heat transfer in a porous copper foam wick heat pipe, the heat pipe was cut open, so the capillary wicks can be removed as samples. After the wick samples were cleaned, a scanning electron microscope (SEM) was used to explore surface ultrastructure and morphology. Residual elements in the wick samples were determined, as shown in Table 1.

Table 1 shows that three elements were observed in the capillary wick, namely, Cu, O, and Al. The residual Al element in the table represents the adsorption amount of the Al2O3 nanoparticles into the capillary wick. At a certain filling ratio and capillary, the residual element percentages were different in the heat pipes with varying mass concentrations. The Al element percentages with 0.3%, 0.5%,

and 0.8% mass concentrations were 0.43%, 1.56%, and 0.96%, respectively. This difference in Al percentages corresponded with the differences in thermal resistance shown in Figure 6. The results indicated that the adsorption of the Al2O3 nanoparticles onto the copper surface increased the roughness of the heat transfer surface in the evaporator. As a result, the active nucleation site density increased. The adsorption of nanoparticles therefore favorably affects heat transfer in a porous copper foam wick heat pipe. 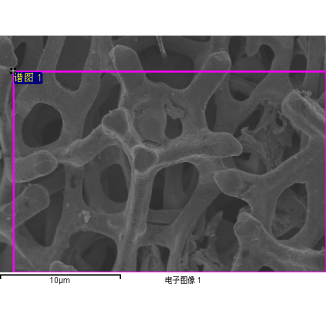 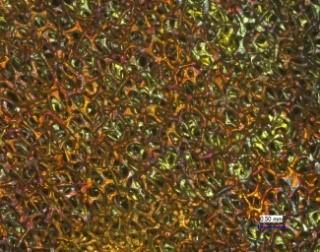 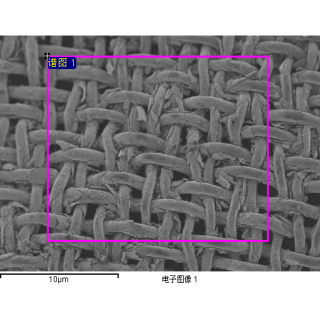 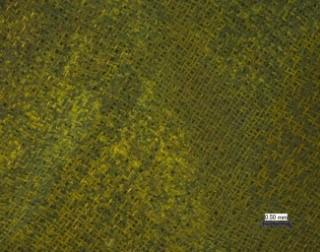 Figure 8. SEM and ultra-depth digital microscope pictures of (a) a 200 PPI porous copper foam and (b) a 200 PPI mesh wick

The figure shows that the complicated 3D porous structure generated through the interlinking of open cells on the interface can be considered as the capillary structure. The hole in the regular 2D net structure of the mesh wick was generated through the interlinking of two copper wires over each other. The comparison of the structures of porous copper foam with mesh wicks indicates that the use of a 200 PPI porous copper foam wick had the following three advantages over that of a 200 PPI mesh wick:

A new type of heat pipe has been developed in this study from the combination of porous copper foam using three nanofluids comprised of three types of nanoparticles, A12O3, CuO, and SiO2. The effects of factors, such as nanoparticles, filling ratio, and mass concentration, on the heat transfer performance of the heat pipe were investigated. The conclusions of the experimental investigation are as follows:

1) The heat transfer enhancement of the CuO nanofluid heat pipe was the best, followed by A12O3 and then SiO2. Therefore, considering the two factors of stability and thermal conductivity considered, A12O3 nanofluids were considered the optimal one and studied in this study, mainly.

This work was supported by the National Natural Science Foundation of China (grant no. 51176069).